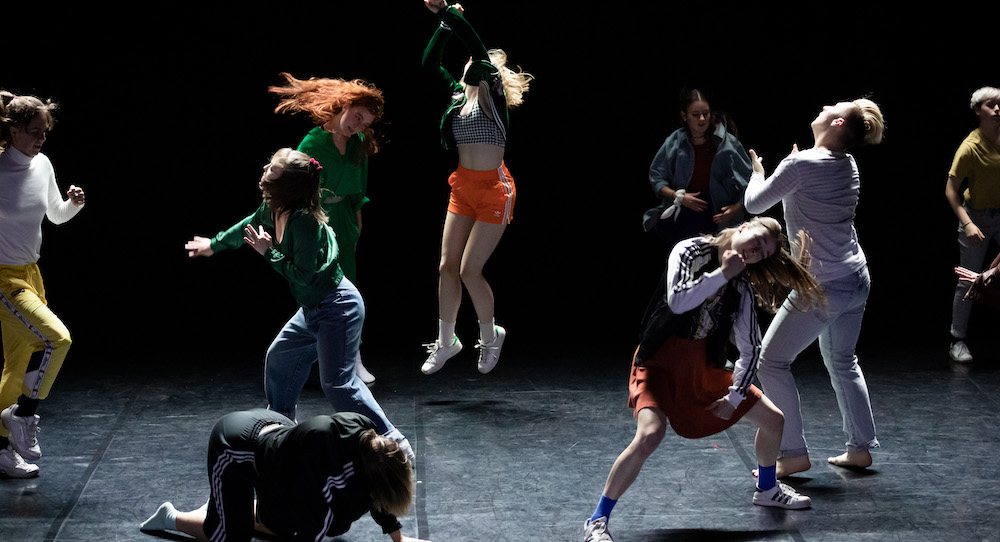 It was a mixed programme with something for everyone.

Canada-based Idan Cohen’s Orfeo ed Euridice, using the music from Gluck’s opera and based on the myth of Orpheus and Euridice, was strong and dramatic, opening with the many dancers forming a triangle shape on stage. The cast wore black and red costumes, with vampire-like makeup. They undulate  and use stylised circling arms at first. Ballet moves are taken and ‘slinkified’. It also blends jazz, acrobatic back bends, references to the Fokine/Pavlova The Dying Swan, intriguing lifts in the partnering and perhaps snippets from Chicago and Cats. The work has an eerie, other-worldy, somewhat nightmarish atmosphere.

Leah Marojevic’s Homage (sound design by John Kennedy, costumes by Fiona Hurley, in collaboration with the dancers) was next, an homage to the body and the dancing self of the performers, celebrating their individuality. The black curtains were drawn, revealing the stark, grey concrete walls of Bay 20 of Carriageworks. The work included theatrical haze and a bleeping, throbbing electronic soundscape. Some of the dancers in their casual street gear were barefoot, some wore socks. The work has a dreamlike atmosphere at times. The work blended contemporary dance moves, ordinary street moves and speech. There was audience interaction as, at one point, the dancers rushed up to audience members and breathlessly spoke to them briefly. Each of the dancers has their own repeated phrases of movement which are contrasted with a slo-mo segment, all of which focuses on the performer as individual using disciplined control and finely honed attention.

Vicki Van Hout collaborated with the performers to make The Consumerist Spectacle. The idea behind it was great – social comment on current events and climate change, with the dance style influenced by traditional Indigenous works and also contemporary dance utilising elements of the Dreaming that symbolise brutality and the Beast within. It was also about preservation of Indigenous culture. Speech was also included (both in English and in Indigenous language). Technically, the dancing was splendid, with flying, swooping leaps and undulating, gliding floorwork, as well as at various points a writhing group ensemble. The Beast dominated the work, and at the end there was a menacing atmosphere as its empire expanded. But to this reviewer, the work seemed perhaps a trifle incoherent.

The sections of Rafael Bonachela’s Lux Tenebris were strongly performed, with its rather overpowering soundtrack by Nick Wales. The idea behind the work was to explore the different meanings of light and darkness, and the tensions in human relationships and the shades of variance between them. Bonachela’s choreography is extremely demanding and requires split second, quite precise timing. It also created tight, rigorously controlled floor patterns. The dancers were full of energy, with flying leaps, laser sharp legs and pulsating jumps. Some of the work was quite undulating and sculptural, with rolling slithering floorwork, but there were also some amazing solos that sometimes became duos or trios. There are repeated phrases of movement. For the finale, the whole stage erupts into movement, the dancers form a line and walk toward us, their arm up as if blinded by the light (But are they? Are we?).