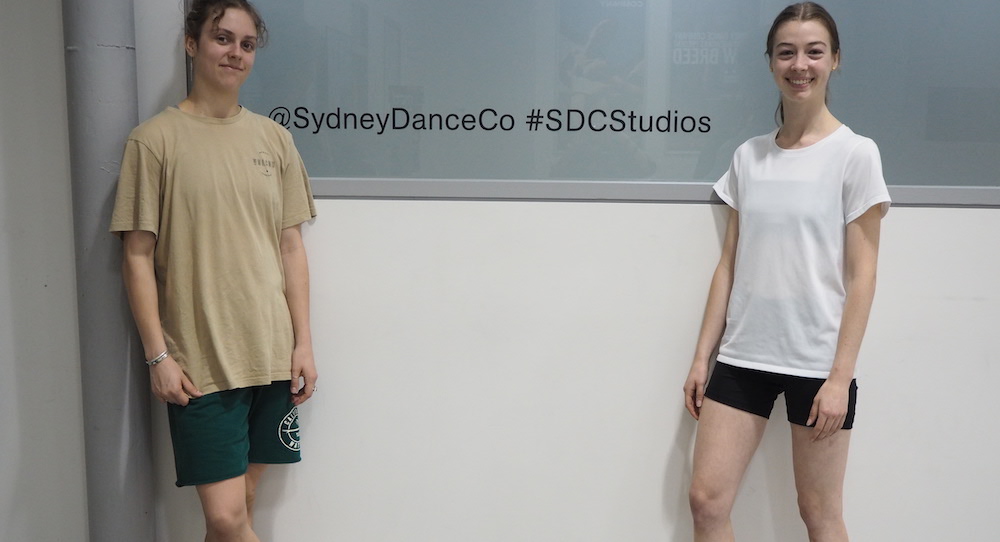 It’s been a long and exhausting rehearsal for Sydney Dance Company (SDC)’s Pre Professional Year (PPY) class of 2019. They have just had a complete run-through of the performance that will be premier 11 December at Carriageworks. They will perform three new commissioned works, by Leah Marojevic, Vicki Van Hout and Idan Cohen, as well as an excerpt from Rafael Bonachela’s Lux Tenebris.

This will be a very demanding and diverse program, with a number of costume changes just to increase the challenge! The season runs from the 11-13 December, with both evening and matinee performances on the 13th.

Dance Informa met our PPYers for a final interview at the SDC studios. The dancers were in the studio, in a huddle, which resembled a footy team before the game, getting into the ‘zone’ for the upcoming performances and their final weeks. There were tears and laughter, along with plenty of emotion, as the reality of an unknown future without their peers around them began to settle in.

So what have you been working on this afternoon?

The girls explained that they had their first opportunity to do the full run-through of the four pieces. And Siobhan adds, “After doing a full run-through, we know what it feels like now doing the pieces back to back.”

They had another run-through earlier this week, and they’re excited, as they think it will have a whole other feeling when they actually perform in the theatre, “with costumes and lighting,” Olivia adds. “We’ll get to do another run-through before the performance because it’s really important to be connected to one another and be fully immersed in the work, to be in the right headspace for each piece.”

Tell us about the works.

According to Olivia, “Idan (Cohen’s) piece is quite operatic and dramaturgical. And then Leah’s piece is utopian; it’s all about caring and connectedness to others.”

The girls explain that in contrast, Vicki Van Hout’s piece is dystopian and chaotic in relation to the overarching theme, and they’ll be using her movement language, which comes from a native Australian background, to communicate.

Olivia adds, “We go from organised chaos to the complete opposite. They juxtapose each other.” And then the excerpt from Bonachela’s Lux Tenebris will be very intense, requiring the dancers to pace themselves in terms of energy.”

Olivia explains that as performers, each piece is unique to them. They talk about how each work demands something new from them with the different styles and energy levels, culminating in another learning experience. Siobhan adds, “We’ve been personally challenged in different ways with each piece, and that has contributed to our individual growth.”

And how will you prepare for PPY Revealed 2019 ?

Olivia talks about the importance of a collective energy, “So before each piece, we’ll get together to ensure that everyone is in the same headspace and ready to fully embody what we’re supposed to embody.”

For each of them, the year has been a shared journey with each taking away their own unique perspective, learning from the diverse choreographers and trainers that they have worked with. Olivia adds, “It’s also been interesting to see how a work develops, not just as an individual, but also as a group, to see how the final product has grown on us.”

Can you give us a glimpse of the costumes for each piece?

Idan’s piece is quite theatrical with heavy makeup, and Siobhan thinks the costumes will be decorative and embellished. In contrast, Marojevic’s costumes are casual and comfortable, with a kind of ’80s style.

For Van Hout’s piece, Olivia explains, “We’ll be wearing t-shirts throughout the piece, as it’s quite symbolic, the way we use them. They are used in different ways to contribute to the overall theme, so we’re wearing them and using them as well. And of course Bonachela’s Lux Tenebris will be performed in casual street wear.”

What’s one moment that will stay forever in your memory?

For Siobhan, “It was one yoga class where we all came together in a circle. There were some of the group who needed support, so we sat in a circle and we were using the bhramari (humming bee), breath and everyone had their eyes closed. There was this amazing energy with everyone humming.”

Olivia says, “We did a piece with Omer which was called Monument. We organised a variety of scores, and then we went to a public area which was down the road near the park, and we all started performing in the middle of the footpath, causing a lot of  disruption to the public, but it was just so cool. We spread out and took cues from one another to come back in. It was very cool!”

What are your future plans?

Siobhan is looking forward to enjoying Christmas with family coming from Germany who will spend Christmas in Sydney. “I still have no idea, and I feel like I don’t need to decide right now,” she says of her future dance plans.

For Olivia, the future seems to be open and promising. “I’m quite open, but I do want to create my own practice and keep training with contemporary and hip hop and maybe study on the side.” Some of the PPY dancers, including Olivia, will be performing in Stephanie Lake’s Colossus at the Sydney Festival. She will also be preparing her showcase for the House of Sole.

In one word, how would you describe the past year as PPYers?

The past year has been been “authentic” for Siobhan; while for Olivia, it’s been a year that was “limitless, having no boundaries.” Siobhan adds, “I’m so grateful for all the different people who have come through the SDC doors to teach us this year.”