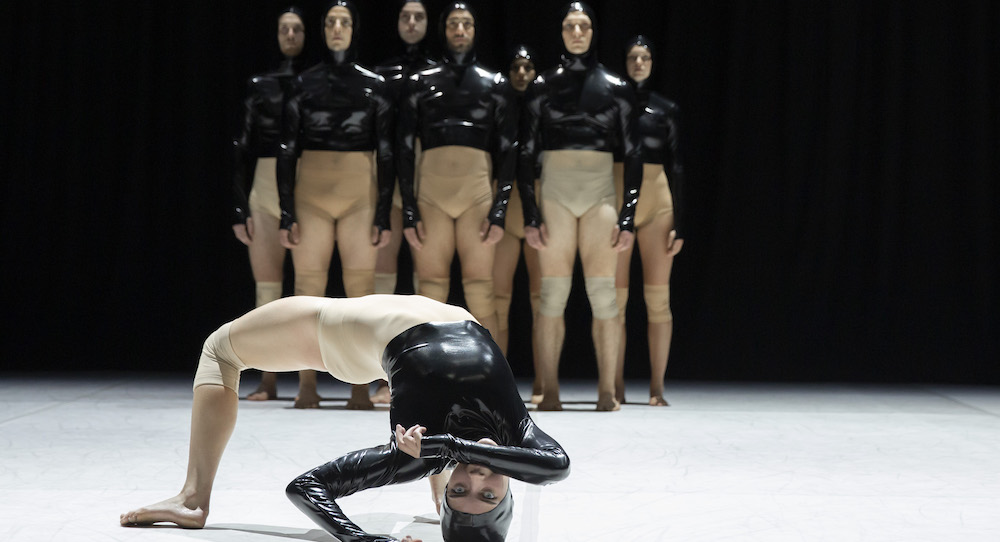 The sixth iteration of this collaboration between Carriageworks, SDC and the Balnaves Foundation has, in the past, provided a stepping stone for recognised emerging choreographers — for example, Melanie Lane and Gabrielle Nankivell.

The 2019 ​New Breed ​contains four original works, and ​Dance Informa​ had the opportunity to speak with two SDC dancers-turned-choreographers, Davide Di Giovanni and Ariella Casu, about their creative process.

In conversation with Davide Di Giovanni

In Walked Bud​, created by Di Giovanni, was partly inspired by the silent movie era when the challenge was to tell a story without speaking, requiring over the top dramatics. Di Giovanni has always loved these silent movies with the minimalism of black and white where the actors use melodrama rather than voices. And as was the case in the early era of silent movies, the action is sped up when the actors move, and if it is a horror movie, there is a creepiness, but for audiences looking at these movies now, it can appear comic.

Alongside this idea was Di Giovanni’s love of jazz music, with which he has always wanted to add movement. ​New Breed​ provided him the opportunity. In ​In Walked Bud, ​he uses the beautiful jazz music of Thelonious Monk. “I have always been in love with jazz music and have wanted to create movement with a jazz tone,” he explains.

Di Giovanni responded to the abstraction and experimental nature of the jazz music to feed his work, with the romance of the sax and piano underpinning the movement.

How did the choreographic process begin?

“I started working with Chloe Leong and simply asked her to move and improvise to the music, starting with a spiral movement and to simply enjoy the freedom,” Di Giovanni says. “And then the music becomes something like playing a game, just as the saxophone and piano play off each other in Monk’s music. So, initially, we just had fun experimenting.”

He continues, “I had this image in my head of this girl going to a jazz bar to sit and enjoy a drink and listen to the music. So it’s the story of this girl who meets people in her life, and then she finds someone and it becomes serious, but yes, in the studio, it all started with this playful game with the music”

The crucial element of costumes

“The costumes, by Guy Hastie, are black and white with a touch of pink fringing,” Di Giovanni describes, explaining that the pink is a big element for him. “I wanted to go toward a minimilism with black and white costumes with pink being an important element — symbolising the freedom and liberation of the 1920s.”

For dancer Luke Hayward, his costume was more represententative of Buster Keaton, with black pants and a white singlet, again translating an idea of this era.

Using only three dancers, Holly Doyle, Chloe Long and Luke Hayward, ​In walked Bud​ is a mature and compact piece which is a delight, underpinned by the beautiful music of Theolonius Monk

In conversation with Ariella Casu

In contrast to Di Giovanni’s piece, with its wit and jazz undertones, Ariella Casu went deep inside herself, creating a very personal and emotional work after having passed through a difficult time in her life. When SDC Artistic Director Rafael Bonachela asked the dancer if she would like to prepare a work for New Breed, Casu said yes, recognising the opportunity to use dance as a healing force.

How is she feeling?

“I’m feeling great. I’m really excited to see the piece. We did a bit of cleaning up last night, and I feel like it’s finally coming together. So I’ll be really excited to see it in the dress rehearsal this morning before the premiere. You know, it’s so quick with New Breed. We don’t have much time to really set it up.”

Casu goes on, “So it’s a last-minute thing, and you know, when you have an image in your head and you have seen it happening in your head for so long, and then it happens with the lights and the costumes and two days before the premiere on the same day, it is quite challenging.”

What was the inspiration for this work?

“So I feel like all of the inspiration for this work came from a very personal time in my life which was pretty much around a period of time last year,” Casu explains. “I had a very hard time. There were a lot of negative things happening. And I felt like the time was right when Raphael asked me if I wanted to choreograph for ​New Breed.​ And I said to myself, ‘Wow, it’s the perfect time because I have so much to say.’ So it was a matter of listening to some music and finding the right song that described what I felt. I found this beautiful song from Armand Amar called ​’Faces’​. And it just really brought up so many emotions. Mixed emotions – between hope and then there was also sadness involved.”

So, Casu decided that she wanted to use ​”Faces” a​s the final song to finish the performance, so that everything before that piece seemed quite aggressive and dramatic.

“That’s how the inspiration came,” she says. “I thought I would describe in the first part of the piece a lot of aspects of our society today and the way people treat themselves and others in a cruel way and the way we are often left alone to bargain between our self centeredness and loving other people and the struggle we have, and being compassionate toward everyone because we are so self-centered. I tried working on that concept by making the dancers really struggle with the movements, and I feel they did struggle because it was new and quite challenging. At the beginning, they have to be very precise and keep in unison and conform to the whole group. So wanting them to conform and struggle at the start. ‘Ruled like we are ruled every day by all these rules that life puts before us.'”

Casu talks about the rules that everyday life imposes, and the banality of the everyday, waking up, going to work and putting on that smile and keep on going, while our visual senses are suffering. So it’s about struggling and about hiding our inner self.

“So slowly, you see the dancers struggling, and struggling more until finally, this beautiful song of Armand Amar comes on, and they realise that they’ve been performing and they haven’t really experienced life the way that we’re supposed to experience it, you know, with hope and honest love and awareness of nature and how beautiful, just stepping out into the daylight,” Casu explains. “So it’s a very easy concept, because we actually live it every day. And, even though it’s cliché, it can be quite a challenge for everyone to wake up in the morning and see the bright side.”

Marco Cher-Gibard had the hard task of creating the music prior to the last song. Casu explains, “So, his task was to create his marvelous music, his marvelous techno music for the struggle section, and then find a way to overlap it and create this gap that we needed to get over the struggle and to be happy. So it was quite a challenge for him to make that happen — to find a way to bring in the last song, not be too obvious or too surprising at the same time, and he did a great job with that.”

Casu had the good fortune to find this composer for the last section of her piece thanks to Di Giovanni, who suggested Cher-Gibard. Casu needed a composer’s ear and someone who could express what she was feeling.

“And Cher-Gibard responded with a resounding ‘Yes! For sure. I’d love to,’ Casu recalls. “And he came to Sydney, and I explained my idea and he realised what a huge challenge that it would be. He even asked me if we could take out the last song. But I needed that last song to be the bridge, and he did a great job. In the earlier section, he does his own thing. There’s also a small section of music at the beginning which is Amanda Mar, which is a prelude to the end. And I also speak at the start to shift the attention to the audience.”

So as to shift the focus, Casu speaks to the audience before the piece starts, asking them how they are. “You know, how are you doing? I’m telling them not to judge themselves. In a kind of ironic way. I guide them into a sort of meditative state to get them into a certain frame of mind.”

Casu also called on the services of dramaturg Bem le Hunte, who assisted her with clearing her mind of negativity so she could focus and put her thoughts onto the stage and break down the false wall between performer and audience.

And the development process in the studio?

“I kept the dancers in the dark regarding my emotions,” Casu describes. “That was the only way I could get on with the piece. If I had told them exactly what I wanted to say, I feel like their input would have drawn them somewhere else. So the whole idea at the beginning is about society. Society telling you what to do without us really understanding why we’re doing it.”

She continues, “So initially, it was just making them do things over and over and be precise and give them ideas that I knew had meaning from my side, without telling them what I wanted them to feel. I wanted them to struggle with the choreography, to feel the struggle. Because the image they gave me was what I was feeling, but I didn’t want to tell them; they had to think that way as well. We just started out making steps, and the choreography kept changing and when Marco came with the music, we put it together.”

The costumes for Casu’s piece, ​ARISE,​ were also a major factor creating the idea of being half vulnerable, and half compelled to follow society’s norms, as Casu explains.

“They appear naked from the waist down, and from the waist up to their heads they’re covered in black latex like a wetsuit. And then at the end of the piece, the dancers take this skin off, and they finally discover what lies beneath it. And they feel liberated. This sort of exposure and vulnerability is real. So, yes, it’s quite psychological.”

She continues, “ We talk about the steps; and I do care about the steps because I work for Sydney Dance Company! But what I want to experience is actually a feeling. And that is because each time I go and see a dance show, I never really remember the steps, but I remember the feeling. And in this piece, that’s what I want to focus on, so that the audience will get it by the end of the piece. I think the most important thing about a performance is that the audience feels something and take that feeling away. Even if it’s confusion or anger or anything I give to them, it doesn’t necessarily have to be liberation. It could also be looking into themselves and saying, ‘What was
different?’ That’s what I would hope for the audience.”

Do you think dance can heal ?