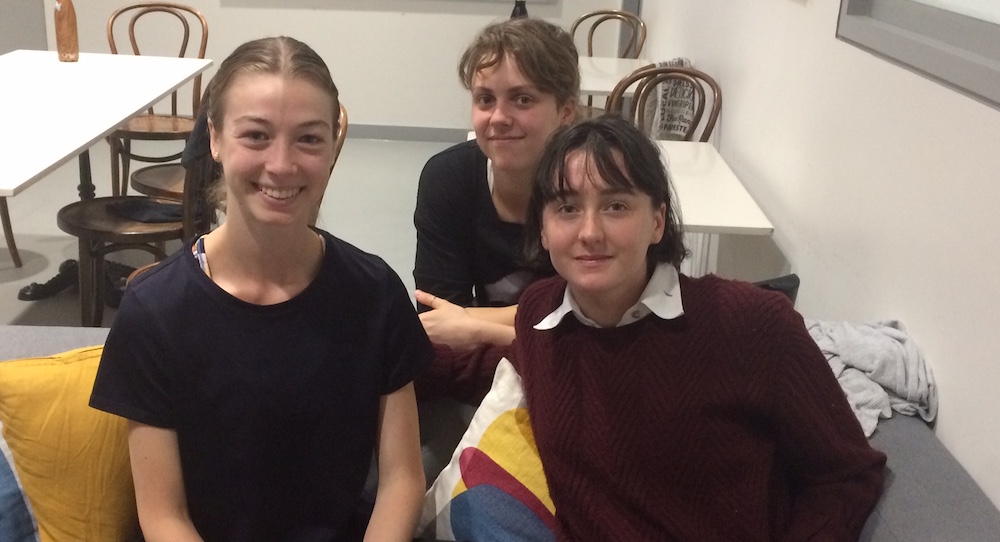 It’s almost the end of the year for the Sydney Dance Company (SDC)’s Pre Professional Year (PPY) class of 2019, and they have profited from a very full and diverse programme.

Dance Informa caught up with our three PPYers, Olivia, Siobhan and Opal, at the SDC studios after finishing rehearsals on a production created by Vicki van Hout, which form part of their end-of-year performance, PPY Revealed.

What were some highlights from this past term?

Siobhan tells us about her experience being part of a collaboration with Sydney TAFE College. Through the collaboration, about 16 of the PPYers were exposed to a variety of creative elements, including but not limited to dance. It was an opportunity to see the variety of artistic elements that go together to create a production. These included lighting, costumes, music and even interaction with puppets.

Siobhan shares her thoughts on this collaboration and says, “It was interesting to work with people who were studying different art forms and seeing what they had achieved and what they were working on. We were there to support them because it was their show. For example, there were the costume designer students who had designed these amazing costumes to represent anarchy and ancient civilisations. It was a really fun task we were able to be part of.”

One of Olivia’s highlights was working with Josh Mu. “The cool part was that we got to work with him as his research and development group working on the development of one of SDC’s 2019 New Breed productions,” she explains. “We didn’t know anything about the concept, but he said he wanted to use 13 dancers, and that’s all we knew really. We were the guinea pigs so he could work on his ideas. It was an opportunity for both of us to learn from each other.”

And for Opal? “So far, I can’t remember specific highlights, but right now, we’re working with Vicki van Hout, who today just gave me this chunk of text to learn, which is really interesting, but it will also be very hard to memorise all this and speak her voice. She has great comedic energy, and it’s been really fun today, because I have been going through it and started to try and memorise it. I’ll be saying this as part of the PPY Revealed performance; you know, it’s a project, and it’s something really fun to do. So, it’s really challenging, but I like to learn different forms of performance. The piece we’ve been working on today is a political piece, with guns and marching. Vicki’s pushing boundaries. You know, who’s allowed to say what on stage and who’s allowed to do what. She wants to push the limits of political correctness and start a conversation. But she’s also very funny. Everything Vicki says is hilarious, and I feel I can’t be funny like her, but this is a great task for me.”

Siobhan talks about a video shoot created and produced by Sue Healey in the Blue Mountains. “That was fun. We spent three days in the studio working on the choreography, and the next day we all got on the train and went to the Blue Mountains where it was shot. We all got up early to catch the train and went up to a lookout where we performed the choreography, which was site-specific.”

Opal adds, “It was a good team-building exercise as well. It was about the patterns and spatial things, so there was a lot of teamwork.”

Olivia adds that Healey emphasised wearing bright colours so as to have a strong contrast against the greenery of the bush.

Siobhan continues, “Sue called it ‘On the Edge’ because she wanted to pay tribute to this vastness of space and wilderness along with this other parallel about us being on the verge of something new and unknown.”
And the future ?

Siobhan is philosophical about her future, knowing that whatever she chooses to do will be the right thing. “I know I’ll be happy with my choice because I would have chosen it for the right reasons.”

Opal is considering doing a second year. Why? “We are given so much information, and every year the program invites different people, which means you have a new experience each time there is someone new. I also love the way Omer and Linda talk about the body and biomechanics because it allows you to access any way of moving. Once you have an understanding of body mechanics, it’s easy to understand why your body is doing certain things. So I really want to fine tune my body and its mechanics.”

Opal continues, “And there’s so much opportunity to network here as well. We’re exposed toso many people coming through the studio doors who could potentially help us later in our careers, both here or overseas.”

And Olivia? “I want to explore a lot of different avenues. I’m very interested in environmental awareness. So I just want to keep learning and diversifying my skills. There are a lot of paths we can go down, but there’s no point in deciding on something until you know what you really want to do.”

These three young performers are “On the Edge,” ready to step into an unknown future with belief in themselves and in hopeful anticipation of their future.