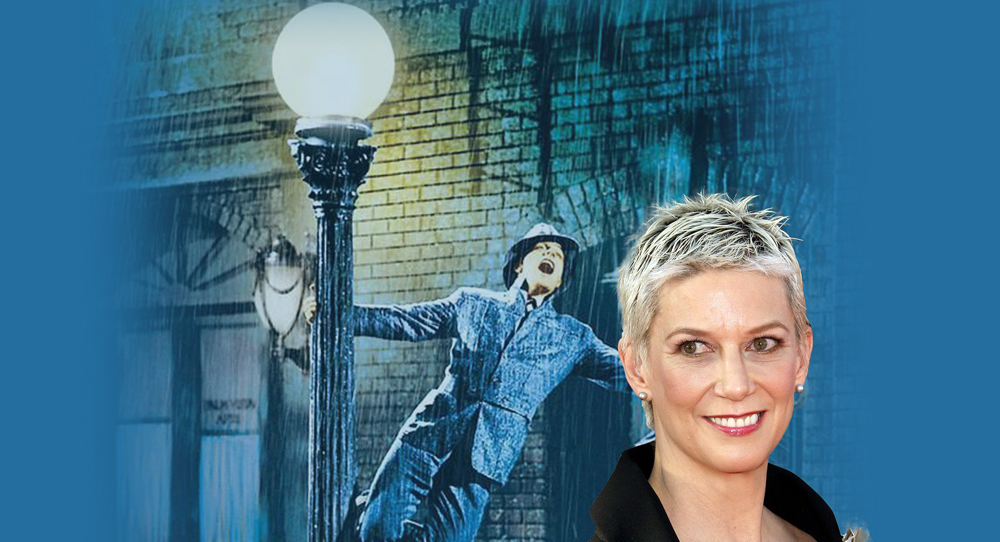 Patricia Kelly says it plainly, “Most spouses don’t write down most of what their wives or husbands say because it isn’t their job; but it was mine at first. Also, a journalist doesn’t usually get a decade to interview somebody every day.”

As the surviving partner of Eugene Curran Kelly (better known as Gene), film historian and biographer Patricia Kelly was, for a decade, privy to both the personal and professional side of the legendary performer who transformed the lexicon of dance on screen with landmark films like Singin’ in the Rain and An American in Paris. Inspired by her time with her late husband, Patricia created Gene Kelly: The Legacy, an intimate show that blends screen and stage technique to give both film and dance fans a detailed insight into one of the 20th century’s most innovative dance creators.

Fresh from presenting the show in London, Patricia explains, “I was talking to my agent, and we were trying to figure out quite how to describe it. It’s not a talk or a lecture; and ‘show’ implies I’m going to be singing and dancing; but I leave that entirely up to Gene. But I do have these fantastic clips on a screen and, of course, these very rare recordings, because he used to sing to me at night. I’m really on stage kind of illuminating what people have seen or are about to see.”

Meanwhile, here in Australia, the local producers bringing Gene Kelly: The Legacy down under for an east coast run in February are calling it an ‘onstage biography’. Indeed, according to Luke Alleva (from Melbourne-based outfit Luca Entertainment Productions), it’s “a very personal show that Patricia has created; and Gene made it very clear on what he wanted and how he wanted his name to be brought out there, and she’s utterly respected that.”

Of course, as we enter the 2020s, it is entirely reasonable to ask why anyone would stage or go to see a show about a dancer whose principal work was done in the 1940s and ‘50s. The answer, of course, is obvious. “In so many ways, Gene has inspired other artists — dancers, singers and performers,” Luke contends. “You know, he wasn’t just a performer. He was a creator, director, choreographer. His eye for film was so many years ahead of time; and of course, Gene, number one, was a ballet dancer.”

Even without Patricia’s onstage homage, Gene Kelly’s influence can be seen in the films of Bob Fosse, the moves of contemporary ballroom and in even the continuing popularity of musical theatre. In fact, Michael Jackson cited Kelly as an influence and, as Patricia reveals, Matthew Bourne brought a bunch his dancers to see her show during its recent London season. “Even The Australian Ballet came round to my house one time when they were on tour,” she recalls.

From a purely dance perspective, Gene’s genius is that he took his ballet and modern dance training and transformed its aesthetic from something European to something American. Unpacking what she refers to as “a particularly American form of dance”, Patricia elaborates, “Gene said that he wanted to dance to the American popular music of his youth, the Gershwins and Cole Porter, but when he looked around, there really was no model. How does the American male move? So he looked at sports…and if you look at his style of dance, it’s very low to the ground, very broad, wide open strokes. And the clothing? I mean, ideally he would come out in a ballet leotard to show the line, but he said that you can’t be a regular guy and come out dressed like that.”

Many would argue that this not only helped to modernise tiring 19th century forms but democratised the idea of performative dance, making it both more approachable and more attractive as an option for men, and more accessible to those not from wealthy or culturally privileged backgrounds.

“He was a big advocate that anyone, whether you’re a builder, a baseballer, a skater, whatever, you can do dance,” declares Luke. “You know, you don’t have to be an exceptional person to be able to do this. Everyone can perform.”

Yet perhaps the most intriguing thing about Gene Kelly: The Legacy is Patricia herself. For the rest of us, Gene is a figure on screens or in books. Not so for her; because although she began as his biographer, she became his wife and remained so until his death in 1996. As she illustrates, “People assume it has to be very difficult for me. They always come up and say, ‘How on Earth can you do this?’ My response is usually that I wish I could do it every night because the engagement with people is so rewarding. It’s basically what allowed me to begin to cope with the absence of Gene. By sharing this story, I began to be able to deal with the loss.”

Then, she laughs, adding, “I think maybe people come in suspicious. They’re thinking, ‘What is this?’, but they come away understanding the relationship, why it worked, and what made this thing tick with such a great age difference and everything.”

For Luke and Luca Entertainment Productions (for whom the show is their first big international event), Gene Kelly: The Legacy will clearly play a different role. “This show pretty much embodies everything that we’re about,” he concludes. And, since Gene also inspired Luke as a dancer, he admits, “I’m like a little schoolboy, jumping around and excited.”

That, right there, seems like a fine legacy indeed.