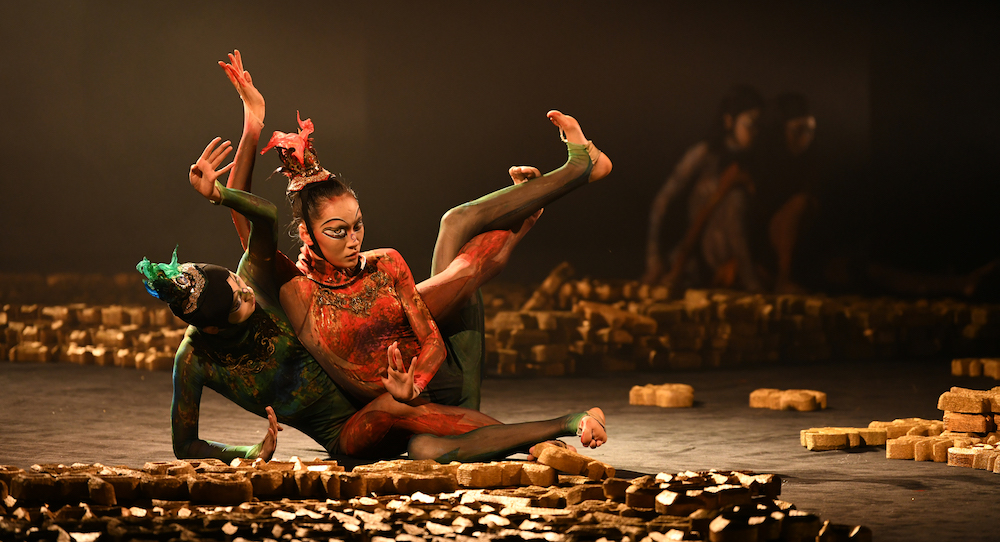 Extraordinary! Spectacular! Lavish, colourful! All the superlatives apply. Yang Liping’s re-imagined Rite Of Spring is an exquisitely detailed, cinema scope work of both technical rigour and manic physicality. It is both grandiose and primal, religious and sexual, sumptuous and occasionally austere. Yet it is also bombastic, monumental and curiously unemotional. Hard to dislike, difficult to criticise without seeming picky, but not easy to love. In the end, for all the sex, death and sacrifice, Liping’s Rite is mostly just that: a beautiful, almost painterly ritual. Like a hard surface, something you bounce off.

However, this modern Chinese version of the ballet made famous by Nijinsky and Stravinsky in 1913, is rich pickings for the keen eye and the curious mind. Once you get used to the sheer dazzle and audacity of it, what this Rite Of Spring reveals is a daring concoction of orthodoxy and rebellion. If at times it seems mechanistic, like an industrial re-production from the factories of the super-state, at others it is wild and dark and redolent of earth and blood and pagan magic. Received wisdoms about Chinese hesitance around sexual display are jettisoned here, just as the stereotype of highly drilled marionettes is upheld.

Perhaps Liping’s genius here is not so much her exacting and elaborate choreography, nor even her synthesis of motifs from Tibetan Buddhism, European paganism and folkloric tradition, but instead her ability to both represent and subvert established norms.

On one hand, she cleverly re-boxes China’s official myth of self (the long unbroken line of ancient wisdom connecting a peasant past to a post-revolutionary future), by paying homage to the poses and gestures of the religious dance and ceremony synonymous with China’s western regions. The movement palette in Rite is much like that of Gansu Province’s Dunhuang Dance, with its elongated hands, cyclic motion and sharply articulated knees. Here, history is glossed up and restaged, and the individual is subsumed in a beautifully orchestrated, visually pleasing pastiche.

And then there’s the sex. Or rather, the sex and death and ecstasy. With Igor Stravinsky’s brooding, cataclysmic score in tow, Liping and her ensemble of remarkable dancers venture into the wild night. As befits the classic narrative of Rite Of Spring, the psychotropics have been ingested and the moon fired ritual has begun. With dazzling, brilliantly conceived sequences, the stage becomes a sacrificial altar. The yin and yang are afire. The beast is unshackled and runs amok, like a river flush with melt water. This is about as far from a monotonous Maoist march as it gets.

All of which requires elite performance. Liping’s ensemble is, quite simply, top shelf. If energy and commitment mean anything in dance, these folks have it in spades. The discipline and precision you expect, but it’s the sensuality and courage of performance that may surprise.

Rite Of Spring is a maximalist theatre event, fired to a shine by its dazzling lights, gorgeous costumes and ever-present sense of drama. Think grand opera, Russian ballet classics, even a dash of Gilbert and Sullivan, and blend that with the Bacchanalian rebel spirit of Stravinsky and the animal fire that burns in us all, and you have some idea of Liping’s epic imagining.

Thus, the cycle plays out, death ends where life begins, and the deep and sonorous bell chimes. Eternity keeping count. Then, behind the overpowering spectacle, the beat, and the silence it describes.