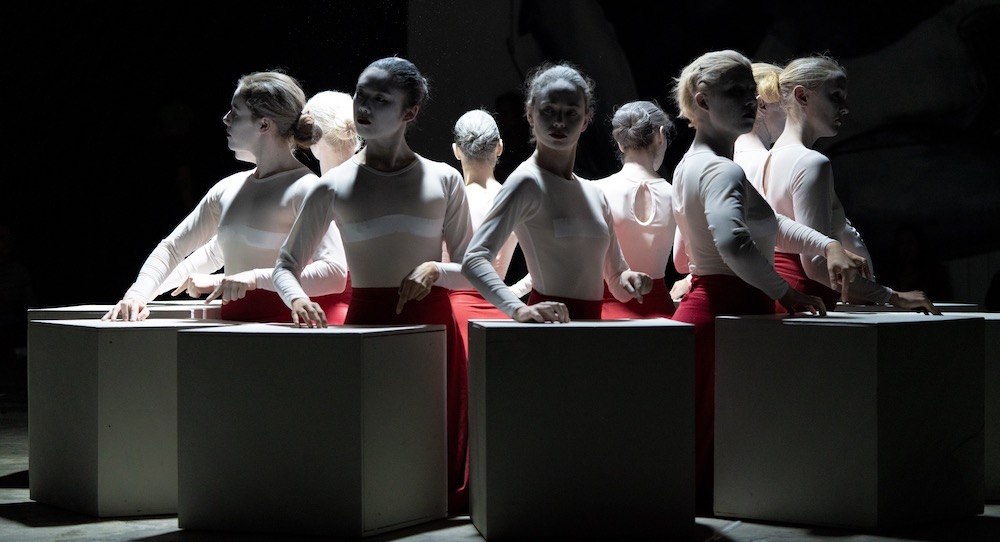 After a sold out taster earlier this year, Sydney-based community arts group Twisted Element premiered its full performance RITUAL on Friday 20 September. RITUAL is a kind of futuristic projection of the way modern tribes form, control and reinforce their group identity. Like many science fiction-inspired works, the future always seems to be a dark and foreboding place with dystopian themes of forced conformity.

RITUAL is the brainchild of Angela Hamilton, Sydney teacher and choreographer, who is determined to engage audiences with the complexities of contemporary dance and dance theatre. She believes the best way to do this is by immersing them directly in the performance. Immersive performance can be a two-edged sword with some audience members (like me!) resenting having to perform without a script and…well, not getting paid for it.

But the decision to make RITUAL immersive was appropriate, as the participative quality of most ritualistic practices stress the visceral quality of dance. Wandering around this part stage, part art installation space induced feelings many of us have amidst a modern crowd – being part of something but unsure what this collective entity really is.

The core of RITUAL’s performance group comprises one leader and 10 novitiates who seem to belong to some kind of mystical Delphic cult. The cult was a cross between Kabuki Theatre and Handmaid’s Tale in the Zombie apocalypse. Wearing ghostly white makeup,these priestesses/oracles would perform slow motion silent laughter with an eerie effect before breaking out into the dance of the electrified amoeba.

This dance is taking the contemporary dance world by storm with international companies, including Chunky Move, SDC and Wayne McGregor Co, all incorporating it in their recent works. It comprises idiosyncratic, herky jerky robotic movements combined with a cellular liquidity, a bit like the behavior of an amoeba in hostile territory. Think Midnight Oil’s dancing Peter Garrett crossed with a box jellyfish.

The Kabuki style makeup masked the dancers and created a depersonalising effect with the majority of the performance consisting of group dancing. The difficulty of forming a personal or individual connection with individual dancers made it difficult to fully engage with the work. For the audience, participating in RITUAL was akin to stumbling on a secret rite of another religion. You feel compelled to take part and mimic the actions as directed, but you know that you don’t believe or share the beliefs of the initiated. This depersonalised performance diminished its dramatic impact.

Much of RITUAL was an exploration of the varieties of ritualistic experience. How participation can range from a shared table, to a formal church structure, to the elemental magical circle.

Twisted Element created some striking images simply through a few deft rearrangements of the dancers and the audience. This full version of RITUAL was also much more physically engaging with a greater dance/drama ratio for both the audience and the dancers. By keeping the audience moving throughout the performance, the one hour, 20-minute show felt surprisingly short and over in a prayer.

The most commendable aspect of Twisted Element’s endeavour is their willingness to make contemporary dance (a knowingly inaccessible art) engaging at the community arts level. Holding the performance in an inner city Artspace, adopting a DIY ethos in costume and staging and literally grabbing the audience to grapple with the show is both brave and quixotic. But this is exactly the attitude one needs to survive in this era of dance funding drought.