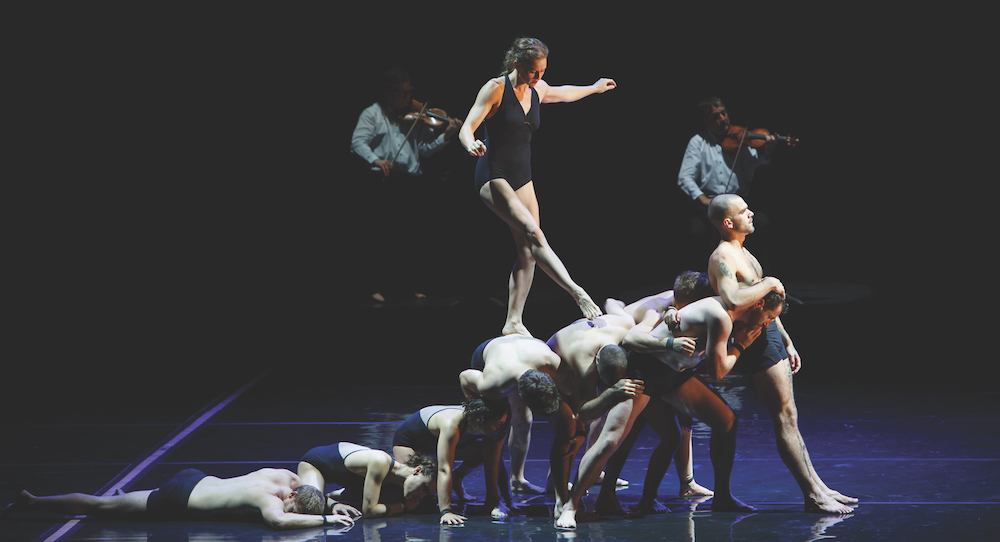 Opera Queensland has joined forces with internationally renowned contemporary circus company Circa, directed by Yaron Lifschitz, to perform Christoph Gluck’s haunting opera Orpheus and Eurydice. In the lead up to the opening of the show at the Playhouse Theatre, QPAC from 24 October – 9 November 2019, Dance Informa catches up with Lifschitz to discuss his interpretation and execution of the famous Greek myth.

For those unfamiliar with the legend, heartbroken Orpheus of Thrace, son of Apollo and muse Calliope, has been granted the chance to bring his dead wife Eurydice back from the underworld with one condition: he must not look at her – even for a moment – on their long journey home. But how can he resist the temptation to look into the eyes of his true love?

This version of the famous Greek myth and tale of fateful love will be like no other. He takes the term ‘contemporary’ to new and raw levels – literally to the core, exploring themes of intense desire. Together, Opera Queensland and Circa have been collaborating endlessly for the past year to present what has been described as a “physical work fuelled by emotion with the first of the oldest operas,” says Lifschitz.  Set to some of the most stirring music ever written, you can expect a mix of thrilling acrobatics, exquisite singing and striking video designs. He explains his version is “savage and brutal, yet beautiful. It asks the audience to really feel something.”

An element which drives the success in achieving the level of emotion, set to be felt by the audience, is the long-term friendship between Lifschitz and Opera Queensland’s Artistic Director Patrick Nolan. Having worked and studied together almost three decades ago at the National Institute of Dramatic Arts (NIDA), Lifschitz and Nolan found common ground. Through their friendship and collaboration, Nolan knew of Yaron’s deep knowledge and passion for music and trusted him to respond deeply to the extraordinary beauty of Gluck’s score. Insightfully, Nolan states, “Opera must embody emotions; an opera singer does that with their voice and an acrobat does that with their physicality.” Evidently, it is this trust, talent, passion and skill that are necessary components when embarking on such an endeavour.

Traditional versions of the opera are often led by three characters. Lifschitz’s version combines two principal singers, Owen Willetts (Orpheus) and soprano Natalie Christie Peluso (Eurydice) and eight exceptional acrobats. He notes, “Getting the casting right is critical. You really need people who can sing, perform and ultimately embody the characters. It’s not just doing it all with props.”

Yaron steers away from conventional creative processes which can often be more hindering than productive, and rather chooses to be instinctively driven by the “pulse of the music”. Remaining authentic in making a true contemporary piece, not just “dressed in contemporary clothes”, Lifschitz is interested in making this powerful story about love, loss and desire, “red-blooded and gritty”. Overturning obvious themes of grief and mourning, he leans toward “death, instinct, sexual drive and unhealthy levels of craving”. He adds, “I listen to Gluck, and I hear life, energy and pulse.”

The way movement style and score are used to translate and push the story forward – underpinned by themes such as “almost unhealthy limits of desire” – are are uniquely fostered by the peculiar language used in Circ. There is a “tension in resistance and flow, the push, pull and push again,” Lifschitz explains. “Acrobats are not thinking about counting music; they are thinking thoughts.”

When drawing inspiration for movement, he adds, “I look for a great deal of variety, and my taste spans across Forsythe, dance theatre, and particularly Balanchine’s sophistication; it’s unparalleled. He is within the music, out, in front and behind it. It’s extraordinary.”

Rehearsals are in full swing, and communicating the story through movement and score are not the only elements to take into consideration. The challenge of seamlessly integrating live singers (singing in Italian with English surtitles), music and orchestra, and mysterious video elements by Boris Bagattini which blend in like a real-time feature film, all pose their own difficulties.

“We recently had a breakthrough in rehearsal, but the biggest challenge is yet to come,” says Lifschitz. “Take the acrobats (who will be dressed in Libby McDonnell’s cool and stylish costumes). You have to train the material and find the right material, and it’s physically exhausting. But with the music, you just don’t know till you hear it, and with live music, you need the audience and performers to feel it, with someone singing from the heart, making the audience and the acrobats feel the breath. This is vital. Having to marry all these elements in together is and will be the key challenge.”

With only weeks until the opening of Orpheus and Eurydice, Lifschitz’s genre-crossing production, Gluck’s haunting score, powerhouse vocals and incredible acrobats is Opera Queensland’s final main stage production for 2019, and presented in association with Circa.