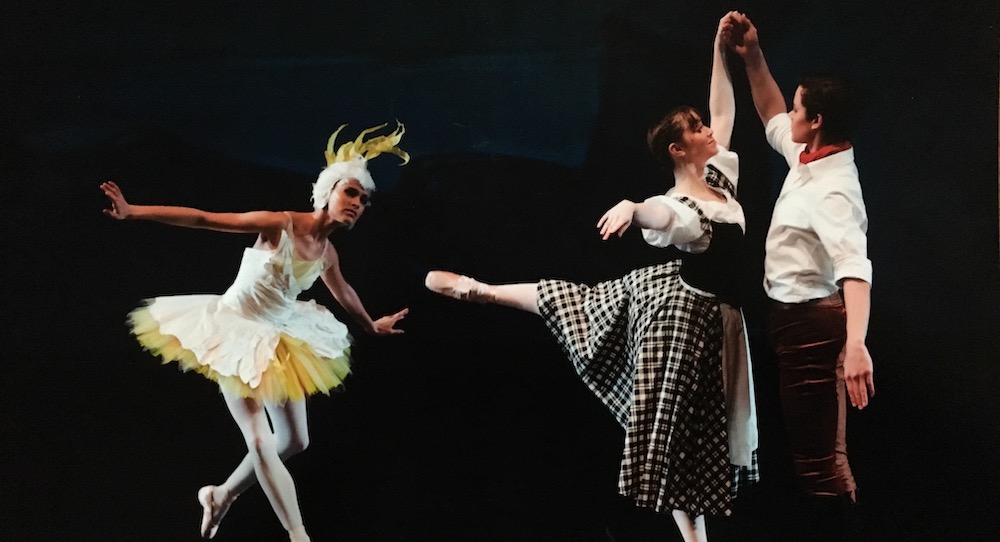 Simonne Smiles, Sydney-based dancer and emerging ballet choreographer, is creating a new Australian-themed ballet, developing it from the ground up. With a unique historical bent and exciting collaborations, Gold is a new work, made for the Australian audience, on our rich and colourful history, highlighting the personality of our beautiful flora and fauna. Dance Informa got the chance to catch up with Smiles about the development process of her new work.

Tell us a bit about yourself, and your own background.

I have worked professionally as a classical ballet dancer for over 10 years both in Australia and overseas, including with the Queensland Ballet, Singapore Dance Theatre, Bondi Ballet and Melbourne Ballet. Following this, I have gone on to freelance perform, branching into adagio and aerial work.

In 2017, I created my first short dance film, Soul Whisperings, a collaboration with APRA Music award-winning composer Me-Lee Hay, which won the People’s Choice Award for the Short & Sweet Film Festival, and was screened in Los Angeles last year.

I currently teach both ballet and Pilates to a wide range of students, including the dancers of Sydney Dance Company and Bangarra Dance Theatre.”

You have commenced the mammoth task of creating a new ballet, from scratch, which is very exciting. Can you tell us a bit about the history of how this came to be?

“In the last few years, my family began to talk about a ballet my grandmother had written in the 1950s. She had originally entered it into a competition at that time. My mum looked at everything she had collated on it, including a full two-act synopsis, and various prose and poetry versions. My grandmother enjoyed writing poetry, and she also had an avid love of the arts, nature and the Bush. I never got to meet her.

A friend of my mother, only about 19 years old at the time, did all the amazing watercolour costume and set designs, and an original music score had been commenced, composed by John Heming. Unfortunately, this cannot be tracked down anywhere, despite much searching.

I decided it would be wonderful to begin to bring a part of this ballet to life by creating the first small excerpt, including following my grandmother’s footsteps, by getting an original score composed.”

Gold is telling a unique Australian story. Can you tell us a bit about the era and the folklore that you are working from?

“The ballet, Gold, is set in Bendigo in the 1850s. Many people were travelling from Europe and Asia at that time to seek their fortune in the Australian Gold Rush. Many of these became migrants and set up homes in Australia, while still keeping a part of their homeland alive through their clothing and traditions. For example, their national folk dance traditions. They also began to adapt to the Australian climate and conditions, becoming familiar with the native Australian flora and fauna. These aspects play a big role in the ballet.

The story is of two such young migrants, who come to Australia during this period. The male lead, Alwyn, has a lucky find and is elated with his discovery. Along the way, their love blossoms, but it is tested by the many worldly allures they face. It is the wisdom of the native flora and fauna that warn the young couple against the lures of evil and save them from a destructive fate.”

What have you created so far?

“At this point, we have created a six-minute section, with three characters – Alwyn, Sheena and a cheeky Cockatoo.

The choreographic content shows the couple meeting, followed by an interruption from a cheeky, inquisitive Cockatoo.

You have chosen to collaborate with a composer, to create all original music. Tell us a bit about your collaborative process.

“I approached Me-Lee to work on the score for this piece. I had collaborated with her previously and knew we had a familiar creative voice. Me-Lee has a dance background, making her a wonderful creative partner for such a project.

I initially explained the story to her, and the segment I hoped to commence with. We discussed the era, characters and composition style. In our creative process, we worked with using the essence of the authentic sounds of the Australian bush, which is incorporated in the score. The type of instrumentation, and sound for this segment, is aimed at match the movement and characteristics of the Cockatoo, as well as other themes for Alywyn, and a folk dance, which have very different musical requirements.

We draw inspiration from each other. I choreograph to her music; it inspires my vision and movement. Me-Lee will then adjust and tweak the music accordingly — for example, the tempo, light and shade, complexity — after viewing the movement. It is constantly evolving.”

Regarding costumes, who have you been working with, and what has the process been like? What is the inspiration behind the costumes?

“Una Hollingworth is the costume designer. We have A4 watercolour designs of all the original designs for the costumes. Laura Bailey, a student of mine, dancer and talented sewer, has been really involved in the process of making the costumes. Laura has made patterns for the costumes from Una’s original designs. There has been some interesting re-purposing of older costumes that we have been doing, which adds to the historical value of the work — for example, the tutu part of the Cockatoo’s costume was repurposed from an old tutu of mine, and Sheena’s tartan skirt is similar to my family tartan. We also have put a lot of work into the details even at this early stage. All the feathers on the bodice are individual applique and sewn on by hand.”

What would you eventually like to see develop with Gold?

“I have applied for a few artist grants, as I would like to continue developing more of the ballet. There is a lot involved in developing even a small section, financially and time wise.

We hope that a company would take it up as a full-length stage ballet. I do think Australian audiences are now ready to embrace an all-Australian ballet. The work is educational in that it teaches part of our history in a fun, innovative way, has moral undertones, and celebrates Australia’s unique and endearing flora and fauna.”

Simonne Smiles has set up a crowdfunding campaign via Pozible to raise funds to continue the next stage of development for her ballet, Gold. For more, and to make a contribution, head to www.pozible.com/project/gold-2.