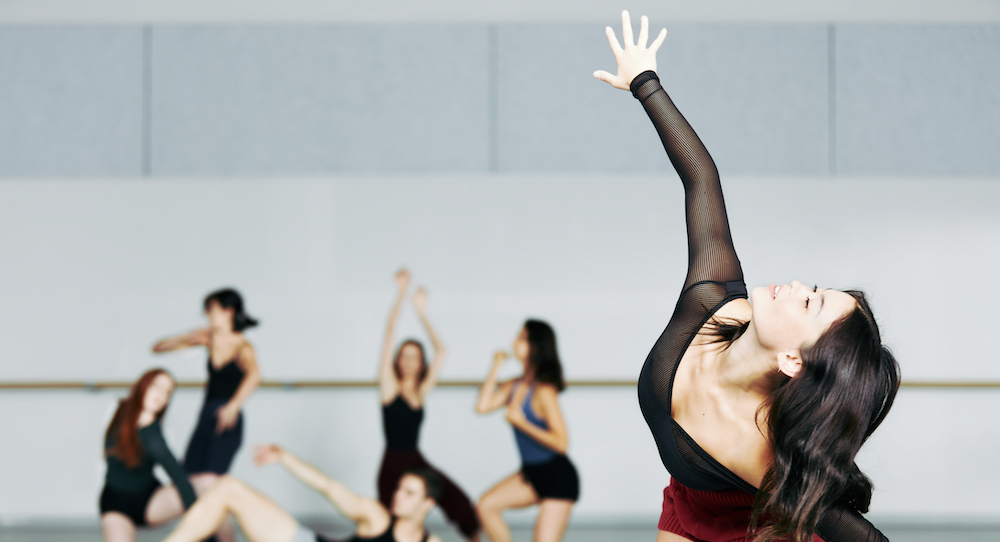 It’s the end of Term 2 for the Pre Professional Year (PPY) students at Sydney Dance Company (SDC), and there’s a buzz in the air with students sorting out things and emptying their lockers. They’re keen to head off on holidays. Olivia also needs to get to work, so we launch straight into our quarterly chat and what they have been working on recently.

The PPYers recently worked with Kaye Armstrong, who guided them in making solos for a solo night when each of them performed individually in the SDC studio, with members of the general public as the audience. Individually they showcased their solos, keeping in mind Kaye’s specificity of focussing on the audience, potentially including audience participation.

The intention was to think about how the audience would view the work and what else might go around the movement. That might include lighting or spatial design, audio, costumes and how that has an impact on the audience. Opal adds, “We wanted to try to break down barriers between the audience and the performer so that we had active audience members.”

“We were also finding ways to not make the intention too direct,” Olivia adds, “making it more open for the audience to interpret, so no specific narrative.”

And what did they come up with?

Opal explains, “I had the audience caged using the ballet barres to lock them in a corner of the studio. I had fun, because I owned the space. I felt really powerful because I was telling them what to do. And even though I had all this space and all these people looking at me, I felt they were the ones who should have been feeling vulnerable, because they’re in this cage while I had all the space.”

Siobhan used memories, which they had worked on with Kaye in the weeks leading up to the solos, and she added her own point of difference, as she explains,

“I used my voice by singing at the beginning and at the end of my solo to explore two different mediums; not just cutting and pasting them together, but trying to make them mesh together to create a whole piece and not just sections to make a unity.” When asked if she was nervous about singing, she responds, “I was nervous, but you have to commit to it 100 percent.”

What did Siobhan sing? “It was part of an instruction manual, which then connected with the movement,” she says.“Instruction manuals are quite specific and direct. It was interesting because it was something I’d never done before or explored, and I found it quite complex.”

Olivia’s piece was about deforestation and how anthropadermic activity is created.

She has done a lot of reading on the issue and explains, “Deforestation leads to climate change and natural disasters, so I used movement to replicate the growth of a tree and how my body could embody that, so there was floorwork, and I added an urban style, embodying what occurs when a tree is cut down and the resulting pain and what it feels.”

At the end, there was a slideshow with a projector, showcasing images of the resulting destruction with the loss of animal habitats.How does she portray the pain of a tree?

“I tried to use as much of the space as possible and a lot of dynamic changes to exaggerate pain,” Olivia says. “I wanted to enhance the awareness of how trees suffer when humans destroy eco-systems.”

Following the solo work, the PPYers have moved into rehearsal mode for the end-of-year production – Lux Tenebris, one of Rafael Bonachela’s previous works. They find the work fast and furious, requiring plenty of energy. Opal finds it intense and explains the challenge. “We’re trying to find how to be efficient with our energy. And there’s a lot of travelling, which demands spatial awareness.”

To finish, I ask them to expose what they have in their dance bags.

Opal reveals, “Headphones, heaps of notebooks because I love writing, sunnies, assorted pens, my banana. I just have random stuff, skin ointment. Looking at this mix, nobody would know what I did for a living. I’m so disorganised!”

And Olivia shares, “I always have a book to read and notebooks. We have notebooks because sometimes we need to study scores or something philosophical. Here’s my sweatshirt. I always have my laptop and notebook, my coffee mug, my lunchbox. I’m wearing my airphones.”