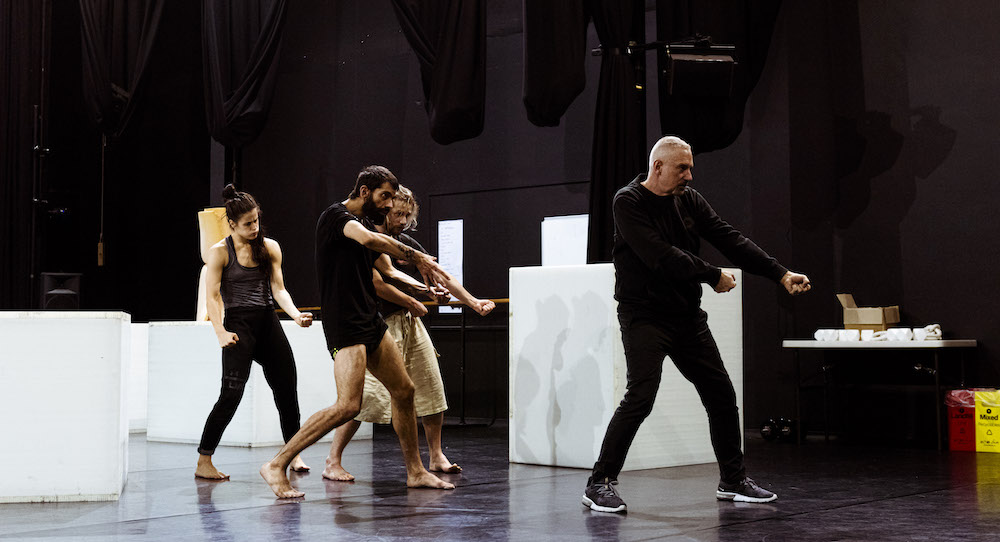 You are at a bus stop. There is a snowstorm. You are waiting. Or perhaps you are an explorer, your companions already dead, staggering, ill and delirious, as you try to find your way out of a frozen wilderness. Right now, the egalitarian force of cold works blindly and relentlessly on you. The polar environment is extreme. You are extremely fragile.

The metaphoric power of the poles is perhaps more potent than ever. Shrinking ice caps, melting glaciers and the continuing geo-strategic battle for Arctic and Antarctic resources have focused attention on the frozen latitudes. The poles, for many, are a kind of global canary; the vast, snowblind expanse of our denial. For others, they represent a rich trove of choreographic inspiration.

Welcome to North/South, a two-part dance work that draws together both hemispheres, two dancemakers and twin visions of our species’ precarious place in a constantly shifting biosphere. When Australian Dance Theatre (ADT) teams up this September with Norwegian choreographer Ina Christel Johannessen (as part of Garry Stewart’s ongoing Nature Series), the human figure will be subsumed in larger, planetary cycles.

“There is this schism between humanity and nature, where we pretend that we’re sort of made in the image of God and that we have dominion over nature,” says Stewart. “So, there’s this artificial construct of what it is to be human, which is separate from the rest of the world.”

For ADT’s long serving Artistic Director, ‘nature’ has increasingly been at the centre of his work. Indeed, having just picked up a Helpmann Award for The Beginning Of Nature, Stewart and ADT are keen to extend the theme. As he explains, “The idea is to close the gap between the anthropomorphic and the zoomorphic, and to bring human beings into the material and fabric of the world, particularly the rhythmic processes.”

Those cyclical processes are starker still and clearly critical in the polar regions, where humans and other animals cling to the edges of livability. Hence, Adelaide-based Stewart’s search for a choreographer from the Arctic and his subsequent introduction to Oslo-based Johannessen and her company, zero visibility corp.

At the time, Johannessen had just completed a residency on the Arctic Circle island of Svalbard, known to most as the location of the Global Seed Vault. “It’s a rare group of diverse people who stay in this vast but beautiful area, and find a way to live,” she recalls. “In the one and only supermarket, the variation of food is strange. You can get snake meat and ostrich; but you have to put your gun inside a locker,” she adds with wry chuckle. “In mainland Norway, nobody carries guns, and if you live inside the town on Svalbard, you’re okay without a gun, but everywhere else you have to carry one to protect yourself from the polar bear.”

It’s not hard to imagine how such an environment could transform and inspire. Indeed, Johannessen’s work, Frozen Songs (which Stewart flew up to Norway to see), emerged from her time on Svalbard and now, with North, she will revisit the Arctic landscape on a stage in Adelaide. As she observes, “A lot of Norway, where I am born and live, is also continuing north of the Arctic Circle. The weather, the light, the infrastructure and the nature are affecting a lot how people are living, surviving, communicating and also the culture.”

Although we in Australia might think Norwegians would be largely unfazed by Arctic conditions, the polar climate remains a forbidding barrier to all. In North, Johannessen highlights this by placing her cast at an isolated bus stop. “They are gathering around this shelter and waiting, waiting for a bus that will never arrive. The shelter is also a symbol of the wish to leave this harsh place, leave the rural area and move toward the bigger towns.”

Meanwhile, in South, Stewart takes us to Antarctica and, in particular, to the ill-fated journey of the explorer Douglas Mawson. Here, there is no electricity. Nor even the fantasy of a bus. “The story is an allegory for our times,” Stewart elaborates. “There’s a quote from Mawson’s autobiography where he talks about ‘the illimitable sky and the illimitable landscape’ that he was standing in. Of course, we know now that the planet isn’t illimitable or infinite; it’s very finite and its resources are finite, and it can be bespoiled and degraded by human activity.”

Aside from referencing the imminent issues of global warming and other impacts of human activity on the environment, North/South, and the Nature Series more generally, seek to embed the choreography in natural cycles. (Think day/night, seasons, circadian rhythms, the beat of the heart, etc.) As Stewart reveals, “I guess we’re using dance as a metaphor or allegory for the rhythms that underpin nature itself, which we are a part of.”

Clearly, this has struck a chord. The Beginning Of Nature won this year’s Best Dance Production Helpmann and has already been performed in Europe, the US and South America. “It’s always surprising when you receive these things [awards], because it’s not like you sit around wondering about whether you might win or anything, you’re too busy just making a work. But yeah, it’s always kind of nice,” Stewart confesses.

As someone who has enjoyed a 30-year career in dance, and worked around the world, Johannessen was similarly inspired by Stewart’s broader ‘nature’ vision. “Last year, my focus and interest were on these persons, or bodies in nature,” she says. “How we humans destroy nature, or how furious nature seems to us when we have no way to fight back — the melting, the fires, the floods, the storms. So, when I was asked by Garry and ADT to join this North/South project, it was an immediate and clear yes.”

Thus, while a bus stop in the north and a doomed geological mission in the south may not appear linked, the overarching meet-point is, as Johannessen alludes, bodies in nature.