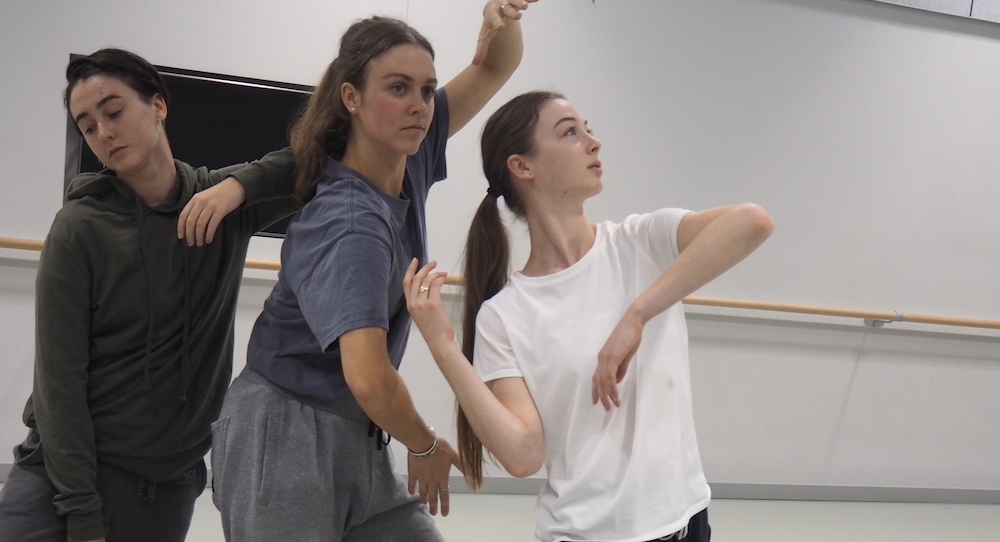 Dance Informa caught up with our trio of budding artists in the Sydney Dance Company (SDC)’s Pre Professional Year (PPY) Program as they delve deeper into their professional training. For Opal, Siobhan and Olivia, the program seems to be a continuous train of challenges set by a selection of industry insiders and trainers.

During this quarter, the highlights have included training with Critical Path, Australia’s choreographic and dance research agency, with the added bonus for Opal and Olivia to participate in the subsequent performance.

They also had the opportunity to work with dancer/choreographer Thomas Bradley from Delving into Dance exploring Butoh-inspired techniques as well as coming to grips with Cunningham technique and learning how to create movement efficiently.

They each had their own highlights and challenges.

Opal’s highlight was working with Thomas Bradley and the idea of energetic trajectories of performance, which sounds almost scientific but actually involves the melding of improvisation, creation and performance together in one exercise.

Opal explains, “So while we’re creating our own movements, we’re learning phrases off other people and then performing it all at the same time. So it’s improvisation but performance by filtration. Someone creates a movement, and the person who’s watching has to filter the information, remember it, then embody it in their own phrase one. And then you remember that, and if you get another phrase, you add that, which becomes your second phrase. You’re also creating choreography for other people. But when multiple people come into the circle, you start creating and interacting as if it is a performance.”

She adds, “It becomes an efficient way of creating movement and choreography. It was okay because we had a learning process, and if you didn’t remember something, that was okay. You just took the information that you did remember and used that.”

Overall, Opal summarises her experience by saying, “It was really challenging and creative, and I also found it liberating. Thomas was very passionate and meticulous about what he was wanting us to learn from that process.”

For Siobhan, “Even though it was in term 1, Counter Technique with Richard Cilli is still what stands out for me. That was when I really started to investigate the different forces in my body — energetic forces — and giving equal value to each part of my body, without any hierarchy.”

One thing Richard said that he won’t forget was “don’t be interesting; be interested.”

For Olivia, “I really enjoyed what we did with Lee Serle. We did a lot of talking and reflecting and improvisation for a specific period of time — improvisation with no objective or goal. We had to improvise for about 25 minutes, but it felt like five minutes! We did a lot of free improvisation throughout the week, and we also did stuff around playing with props.”

Siobhan clarifies, “So the prop could be anything, like a chair or a drink bottle or a ball, but the aim was to repurpose that object and give it a different meaning.”

Olivia continues, “Using a certain prop and trying to manipulate it and then doing things like being a statue holding one position for an extended period of time while trying to play with a prop to see how you might use it for something else. Introducing props was good for me.”

She explains why. “A lot of this term, we have had choreographers who have helped us with new pathways of how to improvise, while Lee gave us a blank canvas. It was really good timing because we had been doing a lot of improvisation, and so it was like taking a break from that and having time to reflect and experiment with what we had learned so far. I feel that the improvisation I came up with that week was the most creative and inventive for me.”

And Opal? Her experience with Cunningham technique was quite a challenge. “We had Cunningham technique with Melissa Toogood,” she explains. “And I’m really terrible with counts, so having to follow this was difficult. It was a very humbling experience, because Cunningham was something that I knew very little about. It’s very meticulous. I had an understanding of how to behave and the basic knowledge I needed in order to do it, but the specifics of Cunningham technique, I had no idea. Combining internal and external timing was really challenging.”

Olivia adds, “We had to work together a lot — for example, in canon work. So you’re running in a circle and you have to time yourself against others in the circle. This means you need to be aware of everyone in the space and doing the same movement.”

Olivia explains how she dealt with this task. “For me, I had to focus purely on my body because there was no music to follow. The people running around were creating the tempo, and if the tempo changed, you had to change your tempo, but you were using different counts. So you had to be consistent, and there was no stopping until the last person peeled off and left the circle. Eventually, there was just one person left.”

Vangelis Legakis was another guest teacher who taught a practice called Flying Low and Passing Through, which is a dance technique and method developed by David Zambrano.

The girls explained that it was about gathering and sending energy outward, then returning it back to the body. “There’s a force field, and Vangelis really enforced breaking habits, which was a struggle at first, but eventually we felt okay with it,” Olivia reveals.

All these practices were challenging, but the trio found that they contributed to their development and growth in some way.

For Opal, “I feel much more aware of my body in space and how much excess tension I’m holding in my body, and becoming more aware of what my body’s doing. It’s having that spatial awareness of feeling my entire body — knowing where it is in relation to myself, the floor, the person next to me.”

Olivia says she has learned to pay more attention to detail and to taking and applying corrections. “Learning to multitask, whether it’s through movement or creating choreography and applying what we have learnt to the choreography or to the movement that we’re trying to achieve. Also being able to think of multiple things simultaneously, through what we have been doing.”

Finally, for Siobhan, “I’ve learnt to be more inquisitive in the sense of not accepting one layer of information but inquiring deeper into whatever we’re given, whether that’s anatomically or energy wise, spiritually or physiologically and not settling for ‘this is the base line, this is all there is.’ And on the flip side, it’s okay to remember that your body is your instrument and to be kind and in tune with it, being efficient by executing things with minimal tension.”

On leaving the studio, I asked them about the opera music I had heard during their rehearsal, so I quizzed them about it. “We’re starting choreographic development with Idan Cohen from Israel for the end-of-year performance,” says Olivia. “We’ve only had two days so far, so we don’t really know much about it.”

Sounds exciting, so stay tuned for the next instalment.