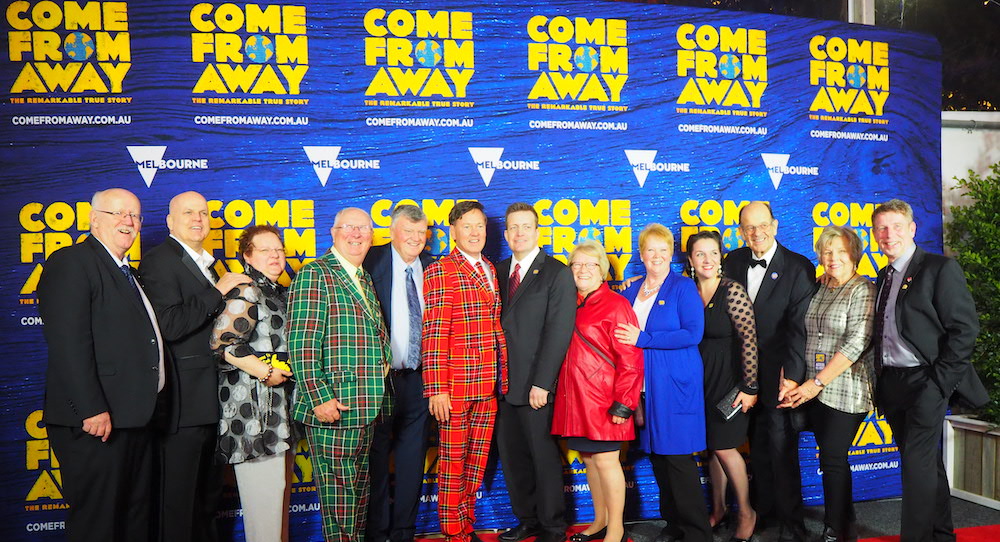 Melbourne has celebrated the opening of Come From Away, at the Comedy Theatre on Saturday, July 20, a new award-winning musical telling the remarkable true story of thousands of travellers, stranded in the sky when the US government closed American airspace for days in response to 9/11.

Come From Away is about the remote town of Gander in Newfoundland, Canada, which became the unexpected host and temporary home to 38 redirected planes carrying 6,600 passengers on them. A co-ordinated effort (named operation Yellow Ribbon) was launched to handle the diversion of civilian airline flights in response to the September 11th attacks in 2001, on the United States of America. The musical shares about a clash of cultures, the stress and uneasiness of the days after September 11, and how these days of waiting transformed into trust and gratitude that grew into lifelong friendships.

The producers of Come From Away flew in the actual people that the show is written about for the Melbourne show debut. These humble, small town people with big hearts stood on stage at the end of the show to share with the audience about the five days after 9/11 when the redirected flights across American airways landed in their remote community and became a part of their lives and legacy.

We spoke to one of the real life Gander residents, Mr Oswald Fudge, on the red carpet prior to the show, who shared in response to that day that they were just going about their everyday lives. “We didn’t do anything different, we didn’t do anything special,” he shares. “We were a town of 9,000, and we went to 16,000 in a day. You had to be there to experience what we saw.” He and the others are surprised by the attention on them, but their humility and endless servitude to the ‘plane people’ has not gone unnoticed.

Watching Come From Away was live Verbatim Theatre mixed with intricately woven storytelling all wrapped in song, live music, physical theatre and choreography. The audience saw the cast transform characters numerous times using accents from across the globe, sing and dance throughout the 1 Act performance. The versatility of the cast was mesmerising to watch, each character believable, relatable and ever so human.

Choreographer Kelly Devine and Associate Choreographer Richard J. Hinds have set choreography that is explorative and exciting. It’s a celebration at times but also has moments of realism and the eclectic. The cast becomes passengers on the plane, the Newfoundland townspeople, and the pilots through movement and characterisation.

There was love woven in with loss, and mystery amongst a suspenseful waiting for answers about loved ones affected by 9/11. Don’t be mistaken, though, this is not at all distasteful or disrespectful to the victims of 9/11; it is a sharing of another story that occurred and perhaps less often shared (until now). This is a true story that drew you in, kept you there and didn’t let you go, not even for a minute. Come From Away had laughter and joy and showed intimately the love of this small community that, without being asked, had near 7,000 new, unexpected and unsettled visitors show up in one day.

The story shows the people of Newfoundland and shares of their hospitality and service to strangers. The kind of servitude that is so rare in our modern world; it changed peoples lives forever. Come From Away is rich with the joy of community, what humanity can do when it pulls together in lifes toughest times. The loss of 9/11 is still raw for so many, and this musical is an artistic offering of hope for humanity, community, and its beauty revealed in life’s tender, broken moments. Don’t miss it!

Tickets for the Melbourne season are available now at comefromaway.com.au.

Images are of the Melbourne red carpet opening and the people of Gander.