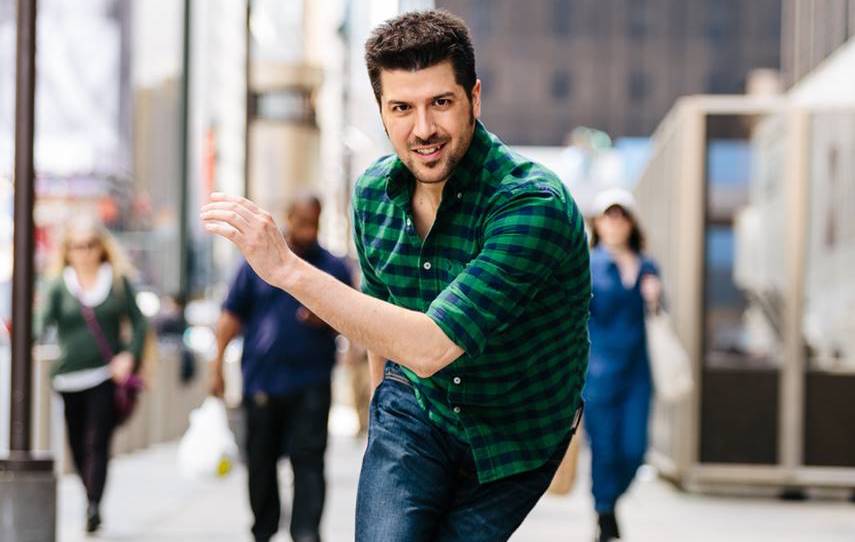 Come From Away has flown in the talented Richard J Hinds from 16,000 km away (New York City), to bring the award-winning musical to life for Australian audiences.

Associate choreographer Hinds is known for his work on Newsies, Jekyll and Hyde, Il Divo: A Musical Affair and his musical theatre classes across the globe, including two Brisbane workshops in June.

Opening this month in Melbourne, Come From Away is the remarkable true story of thousands of stranded passengers and the small town in Newfoundland, Canada, that welcomed them during the events of September 11. To create the musical, writers Irene Sankoff and David Hein travelled to Newfoundland for the 10th Anniversary commemoration of that fateful week and collected hundreds of hours of interviews that have now been distilled into a 100-minute, no interval show. 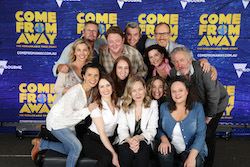 The Australian cast of ‘Come from Away’. Photo by Andrew Tauber.

Although one of the darkest and most shocking events of recent history, the musical doesn’t dwell on the negative but instead on how these strangers came together, and turned uneasiness into trust and gratitude into enduring friendships.

“Even though it’s dealing with the events of 9/11, we sort of labeled it the ‘9/12 musical’ because it’s more about the aftermath,” Hinds remarks. “Our writers were adamant that you only hear the words ‘terrorist’ and ‘World Trade Center’ once in our show. That’s it.”

He adds, “The show has a universal message of humanity and kindness. We really want to spread that message to the Australian audience, that although the story is specific to Gander and that experience, the message in it is universal; it’s about human kindness, love, community and support. I think people are hungry for that message and that experience more than ever.”

For Come From Away, Hinds worked closely with choreographer Kelly Devine, who recently won an Olivier Award for her choreography for the musical.

“For Kelly and me, this show is a dream,” he says. “Before we even took this endeavour together, we were incredibly close friends. From day one, it’s never felt like a working relationship; it’s like you’re getting to collaborate with your best friend.”

And this collaboration wasn’t for your typical song and dance musical full of technical dance movement or huge ensemble numbers. “The challenge for us with the movement for Come From Away was creating a vocabulary that is incredibly pedestrian,” Hinds describes. “There are heightened moments in it, but we never wanted it to not feel real because it could take away from the message of these people. These people actually exist! We’ve met all of them, and we didn’t ever want it to steer to such a theatrical land that it felt not real in any sense.”

The cast of Come From Away are actors and singers, not dancers, so this has presented a unique set of challenges for Devine and Hinds.

“It’s been a fun process,” shares Hinds. “I think the initial instinct was, ‘Oh my, I’m dancing, how do I do that?!’ But the second they got out of their head about it and looked at it as an acting motivated gesture, they immediately just gave themselves over to the movement. From this show, a lot of the cast have really discovered their body. It’s been great to help these performers find their core, their strength and discover movement.”

With Olivier, Drama Desk and Tony Awards, the show has been imbued in success.

“From day one, there’s been so much love put into the show,” Hinds reveals. “We’ve all worked on those projects where it’s about results and the money, but this has never ever been that, so to receive these accolades and these awards is so much more fulfilling because we all have invested our entire soul into this show, and for no other reason than we just felt so passionate about the material. None of us in a million years thought we would have five companies of this show happening every night all over the world, and within only two years!”

All but two of the Australian company are Australian, which has been a joy for Hinds, who has previously visited Australia three times for several different projects, including High School Musical, and to hold auditions.

“I believe that the Australian theatre community is by far the most well-rounded group of people that I’ve ever seen in terms of the ability to sing, dance and act!” he exclaims. “It’s been explained to me by the performers who live here that opportunities are so limited. In New York, you could classify yourself as a singer and have an amazing career and only sing, whereas those opportunities are so limited in Australia that if you pigeonhole yourself to that, you’re only doing a show every few years.”

And he’s only too right.

“The training that I’ve seen here is incredible, especially in the dance community,” he goes on. “So to then have these dancers come in and sing, I am blown away. These people would be working in New York in a second, for how well-rounded they are. And then they tumble and play instruments!” he laughs.

With the curtain about to rise at Melbourne’s Comedy Theatre, Hinds looks forward to seeing you all at the show. And for Dance Informa readers, he shares a hot tip: “I think it’s best not to do too much research; just come in open-minded and just take the journey, because it’s such a beautiful journey.”

For tickets, make sure to visit www.comefromaway.com.au.