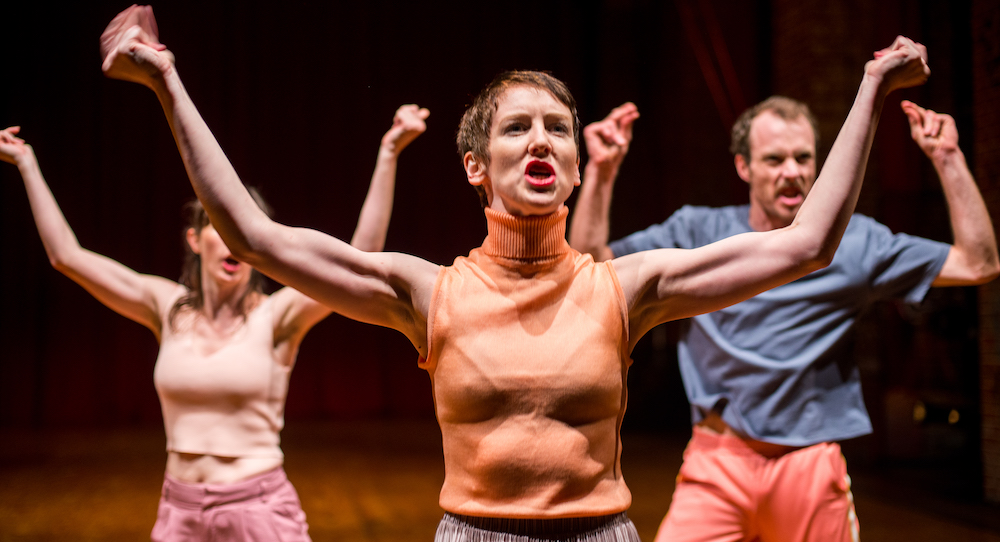 Every festival is a mixed bag. Hits, misses, stuff we just forget. Yet for anyone wishing to reduce an event as hectic and diverse as Dance Massive 2019 to simple take-outs, the task involves asking nigh unanswerable questions. What did DM19 tell us about Australian contemporary dance? What are its strengths, weaknesses, orthodoxies, challenges? Does it really stack up internationally, or are we marooned in an isolated antipodean bubble? And does that even matter, if we enjoyed it and were enriched and/or inspired by our experience?

At this juncture, we might leave the furrowed brow, navel gazing to the talkfest circuit of industry panels and the like. Our immediate concern is with what made it onto the many stages of DM19. Beyond saying “it was good” or “it was the best ever”, it is clear that Australia’s contemporary dancemakers are, like many of us, perplexed and possibly troubled by a zeitgeist riven with angst over politics, technology, environment, gender and history. Indeed, perhaps the most fascinating aspect of this year’s Dance Massive was how it showcased our troublesome divisions and offered up starkly different responses. This is not to say that DM19 was overtly political, nor that an ideological position emerged but rather, that when we truly drill down, what we witnessed was a eclectic cohort of individual creatives (human beings) musing on the core issues and central mysteries of our fragile existence. In other words, doing what artists do best – showing us ourselves, with and without our numerous masks.

This, more than anything else, is why I thoroughly enjoyed this year’s festival. If I expected lashings of yawnsome identity polemic and other such dreary undergrad statement making, I was surprised by the restraint and subtlety of the works. Then again, dance is an ambiguous language, a lexicon of coded physical symbols, and throughout DM19, it was frequently employed to splendid effect.

For what it’s worth, the standouts were Chunky Move’s Common Ground and Siobhan McKenna’s Utterance. Both transcended the either/or simplicities of “issues” to set their sights on deeply and beautifully existential themes. Both were cleverly constructed around simple but profound ideas and both were entrancing examples of how good contemporary dance can be. Elsewhere, a spirit of creative daring and playfulness was evident in Atlanta Eke’s The Tennis Piece and Alice Will Caroline’s Lady Example. Meanwhile, Kristina Chan’s exquisitely detailed and technically exacting solo work A Faint Existence provided evidence that amidst the philosophy and form-bending there is still room for rigour and precision in Australian dance practise.

However, perhaps the most salient work was the festival’s worst. I shall spare the maker’s blushes (or spiteful, trolling revenge) but suffice it to say that it was, without doubt or exaggeration, one of the most dreadful pieces of unreconstructed, juvenile nonsense I have seen in a long while. Not only did it reveal how spectacularly experimentation and placard waving can fail, but it provided reassuring evidence that, on the whole, contemporary dance in 2019 is in far better shape that it was.

Yet, disturbingly, what the presence of this work on a mainstage (at an event promoted as the nation’s biggest celebration of the form) renders undeniable is the shadow of the behemoth — namely, funding. Who gets it and what for? Here then, is the other big take-out from DM19. Watching several works in succession, what you begin to note is the meta-pattern. It’s not so much a heavy, deadening hand or PC p.o.v. but a through-line that reflects the reductionist, trend-based politics of public funding bodies and the favouritisms and careerism that go along with it. There is talk of diversity, but, looking with a cold eye, what you see seems more like orthodoxy. We need not panic about this, but neither are we best served by denial.

In conclusion, Dance Massive reaffirmed the vigour and value of contemporary dance in Australia’s arts landscape. Regardless of like/dislike, it is clear that intelligence, passion and an adventurous spirit are at play. Sure, there is no dance utopia in this country, and real world inputs and tick-box objectives continue to distort and undercut creativity but on the evidence of DM19, the nation’s dancers and choreographers are rising to the challenge.

(Oh, and PS: there was a lot less rolling around the floor this year – and we’ll definitely take that as a win.)