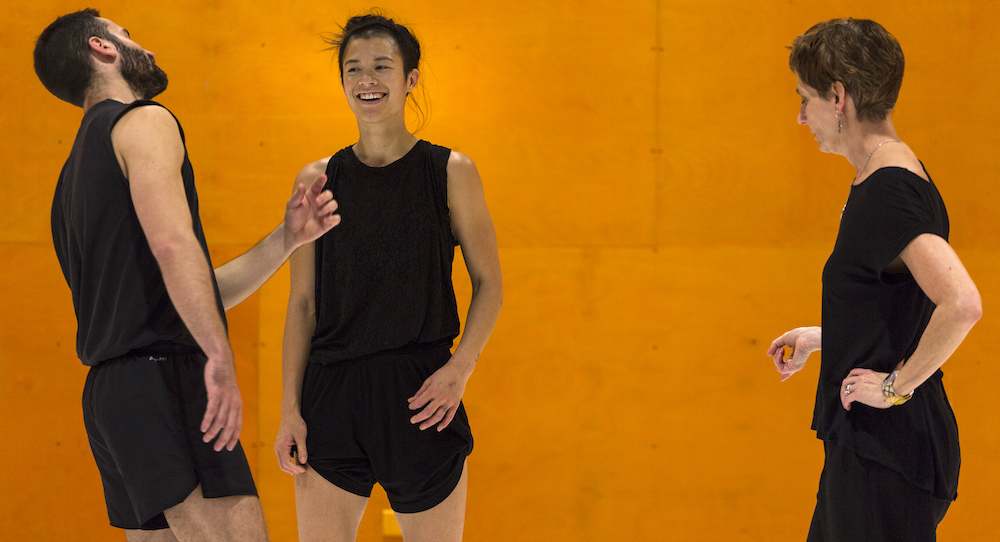 It’s snowing and early morning in Berlin when I contact Anouk van Dijk, while in Sydney it’s evening in the midst of a heatwave. The contrast strikes me as appropriate for van Dijk, a choreographer who enjoys embracing extremes and dichotomy.

In Berlin, van Dijk is working on an original piece, Distant Matter, with the Staatsballett Berlin. It is due to premiere as part of a double bill with Sharon Eyal’s Half Light at the Komische Oper Berlin this month.

With its distinctive unpredictability, van Dijk’s work has been performed at the world’s leading festivals, and her final work for Chunky Move, Common Ground, is no exception to the rule. It will be presented in Melbourne as part of Dance Massive 2019 at the Malthouse Theatre from 13 – 17 March.

Common Ground is an intimate duet with two dancers exploring equality in relationships in the personal, private, public and political space.

It is also van Dijk’s final production for Chunky Move having recently stepped down from the Artistic Director position.

Tara Jade Samaya and Richard Cilli are not only the two dancers performing Common Ground, but van Dijk explains that they were also part of the multi-layered impetus for the work. “You can dance in multiple ways from your own history, and I enjoy playing with things in rehearsals. So with these two dancers and their spontaneous complicity, I wanted to create something specifically around them. They are both gay and comfortable with that, so I just had to give them a platform. I also wanted to revisit the idea of a duet.”

Van Dijk continues, “Around the time when we were developing the work, there was also a lot of debate leading up to the gay marriage vote, as well as #MeToo, with minority groups galvanising forces. It was all about equality. So in the development of the choreography, if the man seemed to be leading, we switched that off so that Tara was leading. The same went for the lifts. And the other layer comes from reading about Louis XIV, the Sun King, and the birth of ballet. At the age of 14, he was performing in his own ballets, placing himself in the centre of the ballet to signify his power. He used dance to display political power.”

The metaphor struck a chord with van Dijk when considering world political leaders – for example, Hillary Clinton in the way she dressed in red, white and blue, showing her allegiance to the USA.

Van Dijk talks about the dancers and says, “Tara is not your typical ballerina; she has the strength of a male dancer. In the initial development process, Tara wasn’t afraid to launch herself into space and experiment with whatever was suggested.

And in his 30s, Richard brings a wealth of experience along with a mature curiosity, constantly questioning what he is doing on stage. ‘What is performing?’”

She adds, “The work is intimate for the audience.” Common Ground has been classified as “raw”, as two individuals seek to understand and “find” each other, with the inevitable constant negotiation. The work attempts to bring together two different people who have a common existence. It is played out on a stark white floor, with orange walls designed by Marg Howell.

Howell also designed the intriguing neo-Roman costumes, which reverse to black, adding the idea of a chess board for the duelling which ensues in seeking to dominate and discover the “other”.

Add to this the stark lighting by Paul Jackson and Jethro Woodward’s multi-layered sound score, the production is a spare but intense experience.

“Amongst everything,” van Dijk says, “is also just us.”

Chunky Move’s Common Ground will be presented at Malthouse as part of Dance Massive from 13 – 17 March. For bookings, head to dancemassive.com.au/program/common-ground.