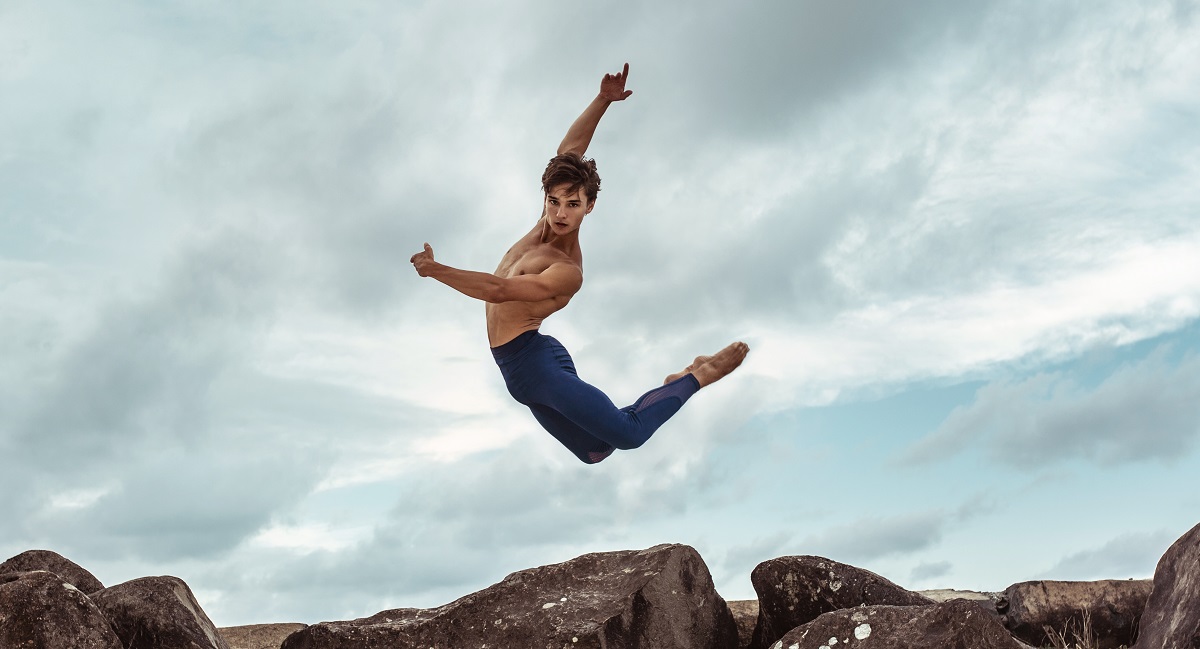 Just before Christmas, 19-year-old Joel Burke of Queensland was named the new Energetiks Cover Model Winner. Joel was one of hundreds of entrants from all across Australia to win the illustrious prize, which includes a modelling contract with Energetiks dancewear and the chance to star on the cover of the Dance Informa March 2019 edition. Isn’t his cover shot striking?!

“It’s a pinch-me moment,” Joel laughs. “It’s incredible. I am so lucky and grateful this happened. Thank you!” he tells Dance Informa.

Talking from his childhood dance school, Kick Dance Studio, where he was getting ready for a self-guided class, Joel explained that he recently finished four years at Queensland Ballet Academy, after doing the Australian Ballet School ITP Program in his preteen years.

Having trained at some of the top institutions in Australia, Joel regards determination and drive as his keys to success.

“My four years at QB with Paul Boyd and Christian Tátchev brought out a lot of drive in me, to the point where I was so determined to make it in ballet, and nothing was going to get in my way,” he says. “I have a lot to thank them for, as well as the passion that was given to me by Kick, because you can’t start a ballet career if you just don’t have the passion.”

And you also can’t start a career without the talent, which is something Joel has oodles of! With our mouths agape, Joel exclaims, “I actually got into the Australian Ballet  School ITP Program, without ever doing a ballet class in my life! When I got in, I was like, ‘Oh, I should probably start ballet now.’”

Although this may seem audacious to many a bunhead, the Prix de Lausanne competitor only ever started ballet to improve other forms of dance.

“I was a tap dancer and a musical theatre performer, and I was like, ‘What’s going to make me different?’, he explains. “And then I just kind of fell in love with it. Then I auditioned for Queensland Ballet Academy, and I got in. So, I was like, ‘Wow, this ballet thing seems to be going pretty well!’”

Fast forward several years, and Joel is dancing better than ever with the world at his feet. But if he’s training himself now and not part of a company, what are his dance plans for the future?

“I’m all for not doing things just the ABC sort of way,” he says of his budding career. “Trusting your gut is a lot more exciting and a lot more interesting. I really like the idea of freedom in dancing. You get to a certain level of dance and it’s all about freedom. I think it should be the exact same mindset toward your career as well. If you’re completely free in what you’re doing, I believe you can perform at the best of your ability. So, I haven’t tied myself down to one company. I’m doing freelancing gigs here and there, teaching classes, and I have a lot of options open, so we will see what happens. I don’t ever believe in being realistic, because realism only gets you so far.”

And now this big dreamer can add ‘dance model’ to his resume after completing his first photo shoot with Energetiks in the company’s stunning new Coda Collection.

“I can’t say I pictured being a dance model at all,” he says humbly. “I wasn’t born with the best ballet body, so I had to work really hard on it. And it’s not until just recently that it started paying off. Even just seeing the pictures that Energetiks took make me go, ‘Wow.’ That was something I never imagined me to look like!”

“Elly was so great to work with, and it was such a good experience,” he says. “She is such a professional. Her whole presence and the way she works is just inviting. And I’m so impressed with how the company works and how they progress, expand and start new things. It’s an exciting company to work for!”

Joel says he has been wearing the gear featured in his photos “pretty much every day since.” He especially loves the long black and blue Alpha Leggings of the Coda Collection, featuring Luxe Mesh on the calves because they are “very comfortable.”

Being comfortable in what you wear is important, but it’s even more important to be comfortable with who you are and your unique skills and passions. Like many male dancers, Joel at first kept his love of ballet a secret.

“I actually had to secretly do ballet at the start because if you did ballet as a boy at that age, it’s not the coolest thing to do,” he shares. “I was a very hyperactive child. So I played football, I played cricket, and I did running. I just love exercise and I love being busy, and I realised that ballet was probably the most challenging thing you can do physically!”

It can also be challenging socially for young boys, but Joel wants to change the stereotypes and be a role model for aspiring male dancers.

“Honestly, if you want it, and if you know you love something, you have to think of the bigger picture,” he says to young dancers. “When you get to my age, are you going to say to yourself, ‘I’m so glad that I stuck to it,’ or are you going to be asking yourself, ‘Why did I give up?!’ Those times when people are bullying you or judging you are hard, but they’re temporary. If you keep following the path that you want, eventually, you’ll surround yourself with people who want the same thing and who want success for you, and there’s nothing more magical than that!”

With his growing notoriety, Joel wants to spread this important message.

Joel looks forward to sharing his love of dance with the like-minded dance obsessed at Victorian Dance Festival (VDF), coming up next month in Melbourne. As part of Joel’s Model Search prize, he has also been named the 2019 VDF Ambassador!

“I’ve never been to VDF before, so I’m really excited to experience the whole atmosphere!” he exclaims. “I love people who are doing things. And the fact that VDF has got so big, there must be some pretty incredible people behind it. [Shucks, thanks Joel!] I love surrounding myself with people like that. And I’m also just excited to be around people who love dance as much as me. We just share that same passion.”

Come meet Joel Burke and see Energetiks’ new Coda Collection at VDF this April 13 and 14. Plus, keep an eye out for Joel’s striking photos in upcoming Energetiks’ campaigns.