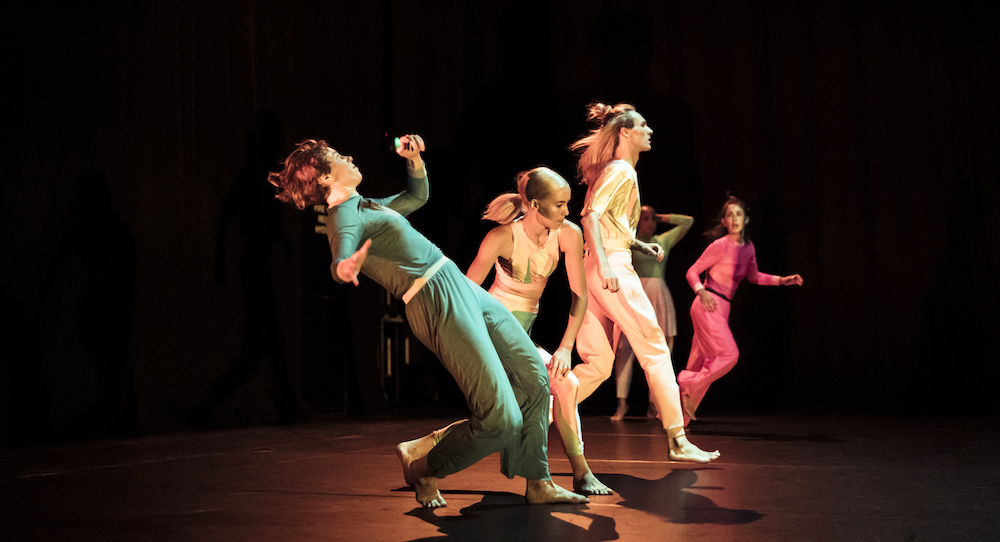 Dance Massive 2019’s first night saw the gallery near capacity as one of Australia’s favourite contemporary creators, Lucy Guerin, premiered her latest work, Make Your Own World. If we were expecting explosion and form shattering spectacle what we got was a rather more muted return to the simplicity of bodies in a black box. No props, no videos, no text; fourth wall intact. Indeed, given the programme notes, you could be forgiven for thinking that Make Your Own World was Guerin’s gift to the dance purists.

What we see on stage is six dancers going through a range of moves that come straight from the centre of the contemporary dance lexicon: floor work, gesture and pose, isolations, etc. However, amidst the consensus of movement there is a palpable and ever-shifting dissonance. Within the ensemble sub-groups form and dissolve, swirling between contest and coherence. In this world, the dancer is at once an individual agent and tribal cipher, and within the broader unity we glimpse elemental dispute (and vice versa).

As Guerin alludes in her notes, the piece is also a dialogue between repeatable choreography and the improvisational instincts of the dancers. In this construction, architecture is fluid. The final structure may still solidify around identifiable norms, but the path is riverine and is at least partially unknowable in advance. Yet, far from being chaos, Make Your Own World moves in clearly marked chapters, as if the ultimate desire of the untethered is simply to find another agreeable anchor.

Guerin’s super-positional approach certainly allows her sextet a degree of elasticity. Benjamin Hancock in particular seems to move with an exuberant sensuality. That said, the work never really sizzles or threatens to deviate into wildness. Strangely, there is nothing especially unpredictable here. All that room to move has resulted in a relatively sedate orbit, as though we are all under the influence of a choreographic gravity. What this says about Australian contemporary dance, and humanity more broadly, is perhaps telling.

In a culture that exhorts us all to be stars we may indeed all be more like planets; describing arcs around sources of light we barely comprehend. ‘Make your own world,’ Lucy Guerin commands us. Our response? To recreate the one we saw last time.