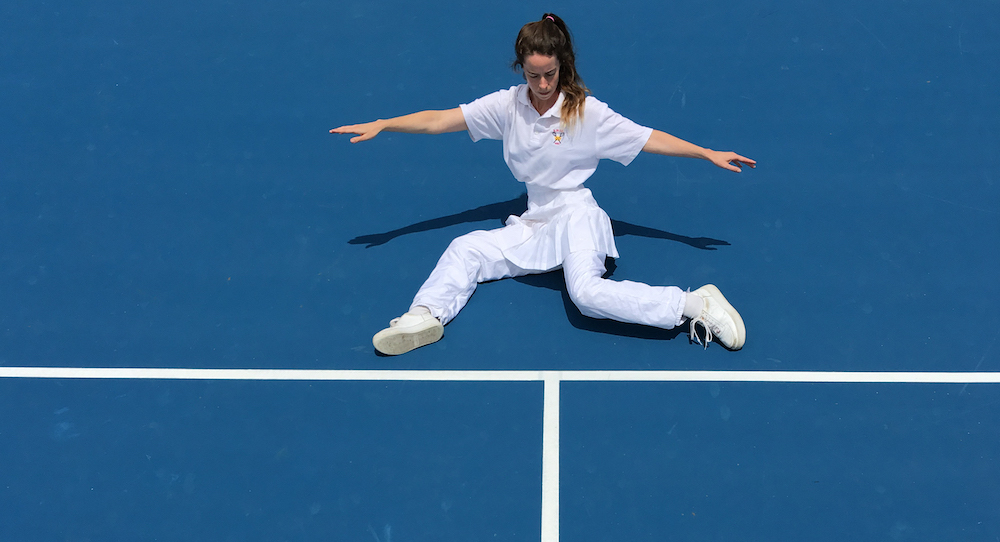 What if there was a dance work that referenced both politics and sport and featured a 408-member ensemble performing Renaissance dance routines on a tennis court? And what if only four of them were human?

You’d expect Australia’s premier contemporary festival, Dance Massive, to be flush with inventive re-imaginings but, as she has done so often in her career, Melbourne-based choreographer Atlanta Eke is once again pushing the artform into daring, playful territory. The Tennis Piece not only pays homage to “real” tennis and references a pivotal (although relatively unknown) French Revolution event but features a blizzard of 400 tennis balls being flung at the dancers by a quartet of machines.

As Eke recalls, “I grew up playing tennis and I had the opportunity as a kid to play ‘real tennis’, or royal tennis as it’s sometimes called, and I was in a conversation with a curator, and I came up with the idea that I’d like to do something on a real tennis court because this particular curator was interested in my personal history. It was the first time I’d been asked to contemplate my story rather than more objective ideas around dance.”

The daughter of tennis coaches (her parents ran an academy), the young Eke was steeped in the traditions of the game, including its original form, the so-called real tennis. This version of the sport pre-dates the one we know now by several centuries and is played on an enclosed court with a solid ball. It was on one such court near the Palace of Versailles that members of the Third Estate took the Tennis Court Oath (Serment du Jeu de Paume) in the weeks before the storming of the Bastille in July 1789.

“The Tennis Court Oath was a poignant moment for democracy, especially considering we’re in a time now when we’re contemplating the relevance of democracy and how it is an ideology and how it functions in the Western world,” Eke elaborates. “I was also raised a Catholic, so that’s another point I felt was worth thinking about in terms of my personal story, but also in terms of how democracy has this deeply religious heritage that maybe as contemporary society we don’t really acknowledge.”

But the historic inspirations don’t end there. The Tennis Piece will feature old style Court (or Renaissance) dances. However, the structure and formality of these dances will be interrupted by a volley of tennis balls. The metaphor here is one of disruption, of chaotic change agents. Thus, the challenge to pristine order, to Ancien Régime, is both conceptual and choreographic.

“We’re attempting to deconstruct these Court dances that we’ve been learning,” Eke reveals. “So there are these 400 tennis balls flying at us from all different angles. We won’t know where the balls will be coming from, so it’s a challenge for the dancers, especially dancers who haven’t necessarily had a history with catching and throwing balls. I feel quite comfortable with it, but I guess the process of having balls thrown at you while you’re dancing is kind of daunting. It’s quite fun, but it feels precarious because it is dangerous.”

Risking the breakdown of structure is not something that Eke is afraid of. The winner of the inaugural Keir Choreographic Award in 2014 has a history of idiosyncratic departure from the current orthodoxies of contemporary dance. Indeed, her imaginative envelope pushing has seen her work performed in Paris, New York, Stockholm and around Australia.

Of the chaos of tennis balls, she says, “The dances are quite contained and precise and are an organisation of social relationship, but through the process of deconstructing them and applying different rules and games to play while we’re performing, we’re trying to burst out of the container that holds them. So yeah, it’s kind of a metaphor for the Renaissance, which was a time of significant shift, or a passing of a threshold, or an opening up. People were no longer controlled by god or the monarch and the individual could then make choices.”

However, The Tennis Piece is no mere linear liberation motif. The relentlessness of the tennis ball machines creates yet another layer. “The machines go full circle, and they end up making it impossible for us to make decisions in the end,” Eke declares. “So there’s this kind of loop where there’s something else controlling the dance and then we are emancipated; but then the machines say, ‘Nah, there’s no time for that,’ because they work faster than we are able to. It’s like they end up determining what the choreography will be.”

As if this wasn’t textured enough, The Tennis Piece also includes a “live trailer”. In the weeks leading up to its March 19 premiere at Collingwood Town Hall, Eke and her dancers will prelude the work in the gallery space at Gertrude Contemporary. “What we do there isn’t possible in the Town Hall, so it’s more like an investigation, or a way to share process,” she explains. “It’s dancers at work; not an apology because it’s not finished yet, but rather, this is the labour of the dancer on exhibition.”

In other words, for all the history and mechanised chaos, we return to the simple yet resoundingly complex phenomenon of the body in motion. Very tennis. Very dance.

Atlanta Eke’s The Tennis Piece will be presented as part of Dance Massive at Dancehouse from 19 – 21 March. For tickets and more information, click here.