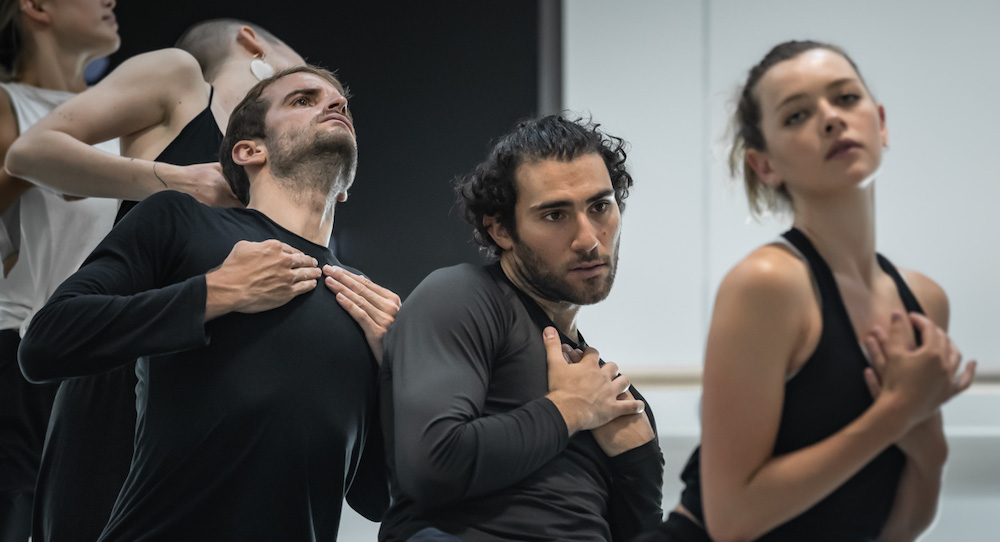 Dimitri Kleioris is one of six new dancers who have recently joined Sydney Dance Company (SDC). Dance Informa had the opportunity to interview Kleioris after the recent media shoot for SDC’s Season One of the company’s 50th Anniversary year-long dance fest.

Australian-born with Greek and Maltese heritage, this statuesque dancer has travelled and worked in a number of contrasting locations. From the USA working on a TV series, to performing in a dance film in Romania, Kleioris would seem ready, willing and able for any challenge.

How would you describe SDC?

“This is an incredible company. I’ve danced in quite a few places around the world. I’ve been in NZ, NY and London, even did a job in Romania for a few months, yet I’ve rarely experienced anywhere SDC’s wonderful culture of acceptance and inclusion, with support from the top down, which is really lovely and it’s something that doesn’t always occur in the arts.”

“The repertoire is quite unique, and with this being our 50th anniversary, Rafael [Bonachela] has decided to highlight the Australian choreographic voice.

I’ve been away from Australia for 10 years, and the only Australian choreographer I’ve worked with was Meryl Tankard when I was 17, so to being able to work with Gabrielle [Nankivell] on Neon Aether and Melanie [Lane] on Woof has been a great experience. It’s been a collaborative process, which is something new for me.

There’s lots of task-based work, which I did a little bit of with the Royal New Zealand Ballet, but I’ve been out of a ballet/dance company for five years, so I haven’t really touched on that.”

What were you doing during those five years?

“I did a TV series in the states called Flesh and Bone, and then I did the lead in An American in Paris on Broadway, and then in Romania I did a dance movie, so it was all dance-related but more theatre and film and TV.”

“That was where the film was shot. I auditioned in London, and then got to spend two months in Bucharest, which was amazing. Romania is such a wonderful country.

But I decided I wanted to come back home to be close to my family, and after all of that overseas work, I feel so supported here — heard and accepted — and I’m looking forward to growing in this company because they really allow you the space to do that.

For example, we’re reworking ab[intra], which we’ll be touring in Europe, but as performers it’s not a cookie cutter situation where you have to dance the piece the same way as Nelson [Earle]. It’s nothing like when you’re doing a ballet like Swan Lake, for example.”

What was your first day like with the company?

“When was that? Gosh, seems ages ago. It was January 3. We had a class and a getting-to-know-you session, which was great. Richard Cilli, who is an ex-SDC dancer took the class and he gave us these ‘getting to know you’ exercises based on questions he asked, such as ‘How many siblings do you have?” or “What are your views on the state of the world? Positive or negative?’ All these random questions, it was nice and intriguing, and you’re physically inhabiting the space with all these new people.

The fact that we’re six new people, the whole dynamic changes. Coming into an existing company can be quite challenging, but the company will have a new structure and a new culture because of all these new people who have entered.”

What have the challenges been for you so far?

“I have definitely been working on developing improvisational skills and tasking qualities, because I haven’t really done a lot of that. Omer Backley-Astrachan, one of the Pre Professional Year (PPY) co-ordinators suggested that I join the PPY improv classes. I really like learning new things, so that has been great for me. I did a little bit of improv in NZ with Javier de Frutos, who created a piece for us but that was a while ago now!

It’s been great getting onto the stage and rehearsing ab[Intra] for our European tour.”

What are you most excited about in terms of Season One?

“Just getting on stage; it’s been quite some time.”

Tell us how you went through the process of developing Neon Aether, a Luke Smiles and Gabrielle Nankivell collaboration.

“We had to assign ourselves to a particular body part of the central dancer, Victor, who was the Sun, which gave each dancer their own trajectory around the sun with a gravitational pull. Luke Smiles also developed and documented each dancer’s own rhythm and counting. My body part was the right shoulder blade, and halfway through we all have a shift so everyone has a second body part. Mine moved to the left side of the hip.

We workshopped it for an hour, before filming it. Two days later there was a sheet of paper for each of us, telling us what our count was when we passed front centre, and where our stops and our stretching out of time was – the Doplar effect. We spent two to three days going over it and have been rehearsing it since. Luke Smiles also created a sound score for each dancer. Luke is amazing. He was very specific, and it took him a lot of time, including creating that sound where at the front of the stage the volume increases and when we go back it decreases, so he would have calibrated that to fit the studio, to fit the sound system and also 3D sound that would travel out to the audience.

It’s been wonderful to have Gab and Luke. To have a live musician creating while you’re performing, and also going home every night to create new stuff for us to hear the next day is really rewarding and fun. A musician who is actively present.”

What are you looking forward to?

“To developing my movement vocabulary, because we have a lot of varied rep in this company, things I’ve never done before. I’d never worked with Raf before. I came to audition last year and had had no affiliation with the company before, but I did see ab[intra] last year and was blown away. It’s an incredible work, a wonderful piece and I’m really grateful that I’ll get an opportunity to perform it in Europe. And also getting to see Australia, when we tour to regional areas. I did that when I was in the Dancers’ Company after graduating from The Australian Ballet School. That was my favourite part of school, touring regional Australia and seeing the country, performing in these towns. Really amazing.”