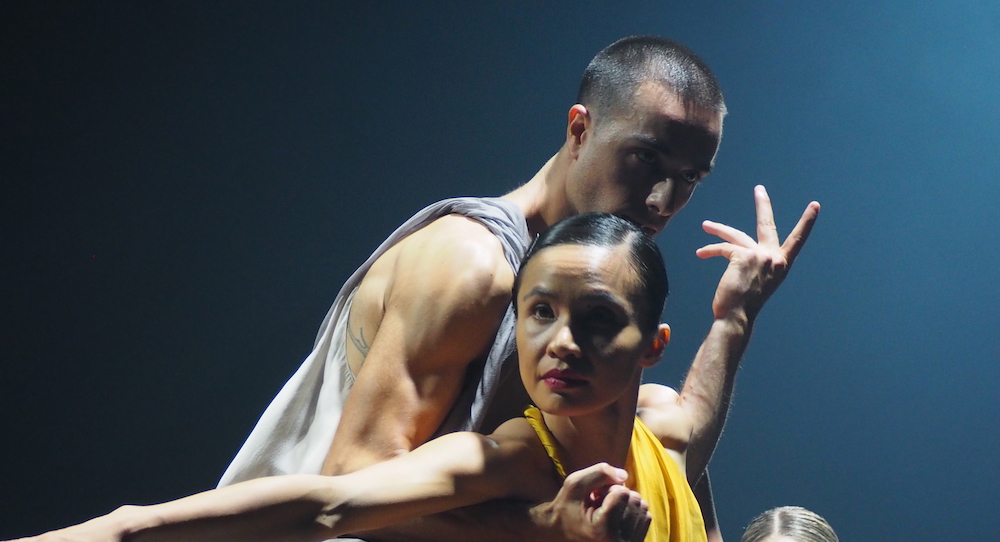 This seems to continue the artistic direction of the company sourcing its creative drive via collaborations with world class artists and dancemakers. Like its cutting-edge tech corporate counterparts, SDC has evolved into a flatter, networked company with an open door policy that sources its creativity by positioning itself as a hub where the creative collisions and collaborative encounters occur. Sort of like Dance Google!

Season One is also an opportunity to showcase SDC’s changing personnel, recruiting six new dancers (Mia Thompson, Dimitri Kleioris, Riley Fitzgerald, Liam Green, Luke Hayward and Alexander Borg) to the company. It will be interesting to see how the dynamics will change with a significant number of new company dancers and the impact on stage dynamics and the company’s general “look”.

Melanie Lane’s WOOF was a smash hit at New Breed 2017, with its post-futurist meditation on the changing nature of collective action. Lane says that while re-mounting the work with the company has been a joy, “To revisit and work with many new dancers has obliged me to really go back to the roots of the work. Some of the choreography has been further developed in collaboration with the new dancers, while the original choreography continues to be interpreted by each individual in a new way. There is quite a lot of improvised material that requires the dancers to work together in a collective spirit, so we have spent a lot of the rehearsal period practising specific improvised physical tools that are necessary to communicate with each other.”

Rafael Bonachela’s Cinco has been developed with the magic number five in mind. He chose five to symbolise each decade of the company’s existence. It’s a dance with five dancers who will dance to Alberto Ginastera’s String Quartet No. 2 musical score with five movements and multilayered separate rhythmic timelines.

The dancers were also challenged to dance and fill the performance space, each with the aim to inhabit the shape of a five-sided pentagon. The development material seems to indicate a classical and Spanish flavour with distinctly angular movements that depart from Bonachela’s usual classical grounded lyricism.

After working with the full company ensemble over the last 10 years, Bonachela welcomed an opportunity to return to smaller ensembles. “With five dancers, it’s very much about their connection with one another,” he explains. “When you work with 16-20 dancers, it’s a very different approach in the way that you pace and structure things. It also challenges and helps me explore possibilities.”

For Gabrielle Nankivell, developing Neon Aether was an opportunity to explore the themes diametrically opposed to her previous creation, Wildebeest, with its grounded focus on animality and the solid materiality of the earth. In Neon Aether, which translates to the brightness of the mythical sky, Nankivell explores the heaven/sky’s impact on our imagination and other intangibles. A newly commissioned work by Nankivell’s long-time collaborator, Luke Smiles, suggests celestial bodies, the air, and also the springs, cogs and click noises inspired by the 18th century Orrery.

This airy confection has a wonderful segment on our place in the solar system, commencing with a contemporary version of whirling dervishes playing a game of musical chairs. In fact, the dancers all form part of an orrery, an ancient instrument for tracking the sun. Each dancer orients themselves according to a specific body part on the central “sun” as they move through space according to their own rhythmic path. It’s super mathematical in its detail, magical in its realisation.

Nankivell explains, “The overarching idea is to look at concepts that surround our relationship with air and the intangible things that exists within the air. Like the space that exists between people and the space that exists around us and the environment. For example, when someone says they’re in love and it’s in the air between us, is it real? Or is it not real? A continual thread across humanity and human evolution is that we look to the air as our vehicle of desire to discover and explore the unknown – finding potential for what the future is. We look to the air and sky when we think about wonder. It’s a known unknown, and I think that’s interesting.”

Bianca Spender designed the costumes after absorbing the music of Alberto Ginastera’s String Quartet. “I expected flowing lyricism, but the music suddenly jerks and wrenches you in another direction,” Spender says. “There is torture and humanity and this huge scope of movement to create whilst being as light as air.”

For further information on Sydney Dance Company’s Season One, which runs through 17 August, visit www.sydneydancecompany.com.