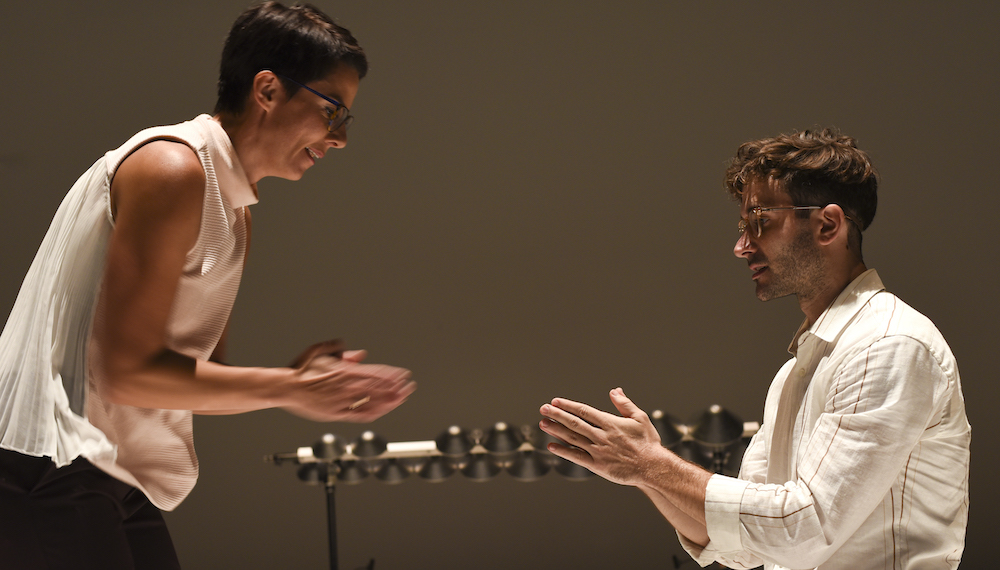 Recital is a duet performed by APRA Award-winning percussionist Claire Edwardes and former Sydney Dance Company dancer Richard Cilli which explores the complex rhythmic interplay between dancer and musician. In this work choreographed and directed by Gideon Obarzanek, both performers move beyond their designated roles of dancer and musician to create an intriguing performance that highlights how rhythms can be heard, seen and felt. 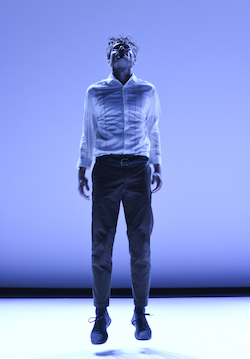 As part of the March Dance Festival, Recital is beautifully structured and mesmerising with Edwardes and Cilli making a formidable duo. Originally entitled versUS, Recital seems to ask the question, “How do musicians and dancers work or create something together?” Recital shows how this typically complementary relationship is actually fraught with issues of difference, competitiveness and compromise before creative harmony is achieved.

The performance takes place on a sparse white square suggesting a blank canvas, with a curious array of musical instruments. The opening scene is a curious “dance” to two metronomes that are fractionally out of time, and we watch as both performers seem to play different rhythms that unconsciously begin to harmonise in our minds.

Much of the first half of the performance sees the performers moving in everyday fashion – walking, playing and running – which reflects Obarzanek’s determination for each performer to surrender their typical performance default mode. The performance space becomes both a walking and sparring field, as well as a place for nostalgic children’s games, but always with a competitive edge and various layers of rhythm. 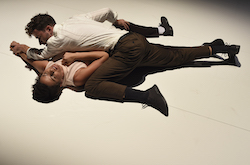 When Edwardes plays her array of percussion instruments, Cilli responds with his own improvised and rather eclectic movements. As the rhythm intensifies, he is not one to applaud the brilliant percussionist as she moves from stroking metal cones with a violin bow, to a glockenspiel. Even their feet in the initial scene mark out a rhythm as they walk around the square space, each attempting to take the lead.

There is fun and intrigue with the audience laughing in recognition of the games we used to play, including a bedroom Brazilian Jiu Jitsu grappling about, complete with “tapping out” along with sweat and moans and groans.

The relationship between dance and music is explored along with activities that are outside both Edwardes and Cilli’s expertise. The various percussion instruments and ensuing sounds challenge Cilli to move beyond his familiar dance moves to another realm of movement. 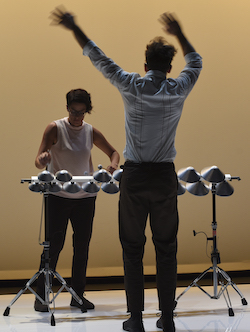 Obarzanek’s direction highlights the friction between the two performers’ worlds, while the polyrhythm and phase are central to the choreographic and compositional material Interplay.

With Bosco Shaw ever reliable in relation to the lighting, and basic, daggy clothes, matching glasses and shoes, there is nothing to distract us from the interplay of rhythms.

In about an hour, we are entertained and engaged, fascinated and amused, as two virtuosos in their respective fields play with a juxtaposition of rhythms and seem to enjoy the process as much as the audience. While a recital generally suggests a finished polished piece, Recital is a demonstration of how workshopping ideas from different artistic backgrounds can be fun, fascinating and fabulous.