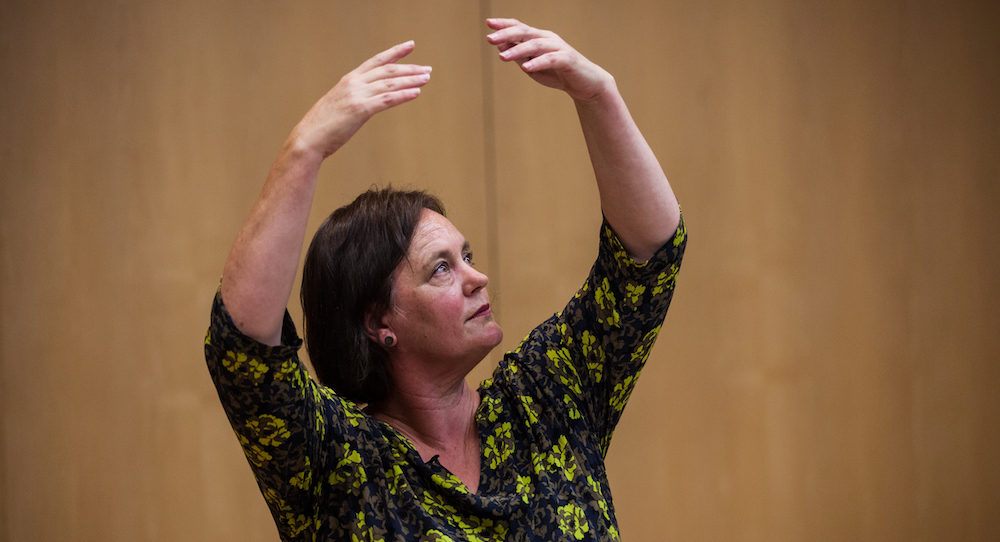 The first of these exciting “talks” (lecture/demonstrations/part-performance) as part of March Dance  was by dance luminary Julie-Anne Long.

Award-winning Sydney dance artist/scholar Julie-Anne Long reflected on the role of identity, the female body, the everyday and place within her significant body of work, revealing how choreographic thinking might help us to make sense of the times we live in. Long is a dancer, choreographer, director, producer, curator, mentor and educator working within the diverse context of Australian contemporary performance. She is interested in the stories behind the dance and what motivates choreographers.

Long had a three-day residency at the Surry Hills Library and was interested in the blurring of boundaries between fact and fiction in dance and performance. Long reminded us that traditionally with regards to female autobiography, there is the conflation to concentrate on the personal and domestic.

She countered this with mention of Tracy Eminem’s work and the difference between Subject and Object (or is there?) and the demarcations between I/not I , Me/not me , Myself/Someone else. She interrupted her talk with poses and tiny snippets of illustrative choreography.

Long then jumped in her speech to her childhood, showing how she has always been obsessed with being a dancer and dreaming of being a ballerina. In her childhood, she had an exercise book and she read a little of it, as well as mentioning the Princess Tina ballet books and the Lorna Hill Veronica at the Wells books. Long also paid tribute to her dance teacher.

Turning our seats around and with Long moving to another part of  the room, eventually we came to the next part of the talk, when Long examined the invisibility of middle-aged women, and wanted to destabilise audience expectations. We were reminded that the pioneers of “modern dance” (Martha Graham, Mary Wigman, etc.) explored female identity through everyday movements. She also looked at gender and the representation of the human body.

For her work-in-progress (Retrospectacle), in collaboration with Narelle Benjamin, Martin del Amo and Vicki van Hout, Long will be examining how we view and value (or don’t) the middle-aged performing body – the dancing body vs the “everyday” body.

In 2017, Long was The Mascot in The Champions at Carriageworks, directed by Martin del Amo, with a flourish alluding to Fokine/Pavlova’s The Dying Swan. Now in this new work, the mascot Swannee will take centre stage, raising a discourse about the distinction between public vs private, comedy vs pathos.

We also met Queenie, another character of Long’s, examining women of power, Long changing into character as we watched.

For the new Retrospectacle, Long has a manifesto where she wants to make the literal appear abstract, the abstract express emotion, and use lost and found material rather than create original choreographic work. The personal is still political in 2019.

For the last part of the evening, we again shifted seats, this time leaving a space in the centre. A few audience members were chosen to participate being given a towel to fold. Then they had to repeat the pattern of  movement facing away from their chair and towel. Next they had to walk in a   circle around the room making the movements smaller , then closer to the ground .The lights were dimmed for extra effect and Long advised what music she would have had playing if possible .

The evening concluded with a neat summing up and a return to books and writing.