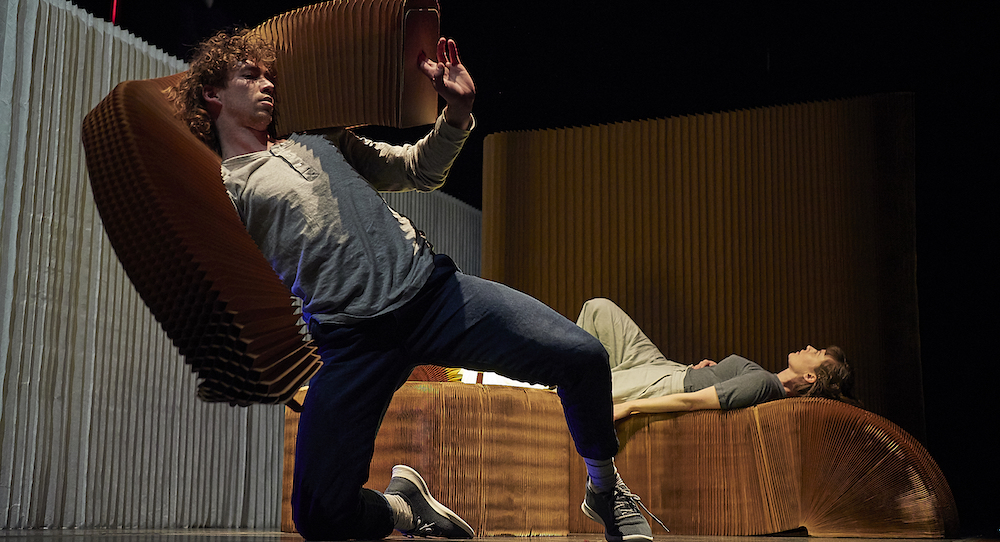 Sometimes, despite our impatience for spectacle and gratification, we are made to wait. Such is the case with Alison Currie’s Concrete Impermanence, a work that slowly reveals its full weight. If it begins with the kind of abstraction we are used to in contemporary dance, it concludes with a poignant sustain — or rather, a reverberating and wistful decay.

At first, the dancers seem disconcertingly listless, their unpunctuated movements and occasional over-rotations making you wonder what is intention and what is error, or just lack of energy? However, the choreography of various concertina cardboard objects (room dividers) soon draws our attention to the deeper seams at play. As walls build and flow, distort and collapse, we see that in Currie’s vision even space is a fluidity. Even mathematical objects, or pure Platonic forms, are mutable. Entropy eats away the eternal, which in turn is shown to be impermanent.

In this entropic realm, the human body has no real rigidity; and so the dancers bend and flop, no sharp edges, very little punch. They fold the liquid walls and are in turn enfolded by them. Indeed, they share a dance of reveal/conceal with supposedly inanimate objects, except that for this hour, they are not inanimate at all.

What Currie has done with Concrete Impermanence is to channel the inexorable motion of things into the bodies of humans and the fibres of cardboard. All atoms. All in constant flux. All in the process of unbecoming. Yet, in the end, just when you think you’re in a world of quantum gravity, with curved space and all the rest of it, you are returned to the body. To the visceral experience of impermanence.

Perhaps, for 50 minutes, you can brush it off, but the intense and tender finale draws it all together. It’s a risky manoeuvre in an era of one-line synopses and instant fixes. (Indeed, the woman sitting next to me decided that the Facebook feed on her phone was a better buzz.) Thus, despite a few seemingly unfocused moments, and times when the dancers appeared to move with little purpose or passion, Concrete Impermanence is a slow burn well worth staying off the phone for.