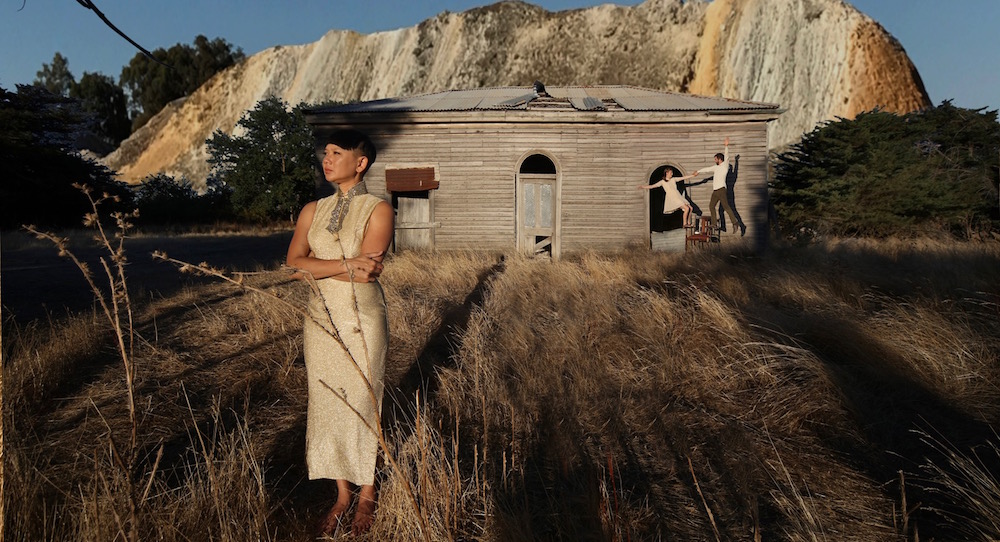 Our reflex, most often, is to understand demolition in terms of damage and destruction. However, contextualised differently, we can regard the act of demolishing as an act of clearing, of re-configuring. A demolition is also a revolution — an abrupt and palpable change, a re-drawing of both space and history.

Here in Australia, the living experience of extreme change is carried in the memory and cultural echoes of both the migrant and indigenous communities. Indeed, after European settlement, Australia is, in many ways, an ongoing tale of disruption, one in which invasion, disease, agriculture, mass immigration and heavy industry transformed a continent. But how do we read this change?

It is perhaps appropriate that a collective of dance and theatre makers based in one of the country’s first truly multicultural regions should choose to explore what co-director Rebecca Russell calls ”the dramatic, violent change” which has affected Australia since 1788. Or, more particularly, since the 1850s gold rush in Victoria that transformed rural townships like Bendigo, Ballarat and Ararat into wealthy mining hubs with huge populations of Anglo-Irish, European and, significantly, Cantonese fortune seekers.

This then is the start point for Russell and creative partner Ken Evans’ work, Demolish. As local residents (from the town of Clunes), they are well versed in the region’s golden history and its economic lineage of nuggets, farming and tourism. “The gold rush is something that’s celebrated, and there’s references to it everywhere,” Russell observes, “but one of the things I found most interesting when we first moved here was that it was difficult to find stuff about the First Nations people here.”

Suffice it to say that the local indigenous people, the Dja Dja Wurrung, lived in the landscape long before cart loads of miners and farmers arrived. As Russell and Evans started to research Demolish, they began to form a collaborative bond with the Dja Dja Wurrung, and from this a new perspective emerged. “What struck us immediately was the terminology they used for this region, which was ‘upside down country’,” Russell recalls. “Everywhere you look around here, you see evidence of mining, you see landscape that’s been altered quite dramatically.”

Thus, what for modern eyes is simply familiar topography is for more ancient onlookers a drastically upturned landscape. As Russell explains, “We were interested in coming up with something that was responding, in some way, to that idea of upside down country by looking deeply at what that means now because, as non-indigenous people, most of us haven’t had access to the real story of the land.”

However, Demolish isn’t content to remain in the silo of “white response to black history”. Aside from the notion of big change, the work also focuses on the universal experience of home. For one of the show’s stars, dance artist Janette Hoe, the metaphors at play here are far from abstract. As a recent arrival from Malaysia, she bridges the old and the new, spanning two homelands and two distinct cultures.

“I’m very interested in how a body connects to a place,” she declares. “For a relatively recent migrant, it’s a very good opportunity to be exposed to this idea of demolition, or to the idea of change being carried forward.”

With its language rooted in the body, dance has always been a vehicle of both storytelling and historical narrative. Similarly, the land itself has a physical language, and like the body, wears scars. As Hoe explains it, “What I’ve got from the research into what Rebecca’s been exploring has given me this sense in the body of what it feels like, in a way, to be raped.”

In turn, this points at something else inherent in the process of demolition — namely, the sense of impending threat and violation. Whilst we typically regard such terminology as belonging to the rhetorical terrain of history wars and rights campaigns, Russell and Evans may well discover that Demolish is tapping into something viral and contemporary.

“You know, it’s like the saying, ‘Once you buy a red car, you see red cars everywhere,’ but since we started making this work, we keep seeing how there’s this real zeitgeist of really deep and philosophical conversation about change,” the former reveals. “It’s about climate change and environment but also about power structures and how we go about thinking about how we do things. All these huge conversations are going in politics and society that somehow we’re touching on in this show; so I think it is in people minds, more so than we realised when we started this.”

Meanwhile, Butoh trained dancer Janette Hoe is busily embodying the process of transformation, finding her feet personally and professionally in a new country. “The metaphor of home has been very important for me in terms of relating to it on a more personal level,” she says. “Intellectually, I understand what’s going to a certain extent, but when you talk about home it’s an experience. It’s a great way of finding a language to help me connect, through the body, with what actually happened in Australia.”

As Demolish prepares for its premiere season at the Bendigo Showgrounds and the producers draw together the disparate strands (including architecture, archaeology and demolition engineering), Russell muses about both the future and the past. “You don’t actually get to see a demolition often,” she notes. “You see a building one day, maybe some hoardings, and then, next day, a big hole; and then you find it really difficult to imagine what was there before.”

In the end, perhaps it is not just the country that is upside down. Maybe all this creative destruction has also upended the collective memory/myth we call history. Or rather, the story we call us, the anchor we call home.

Rebecca Russell and Ken Evans’ Demolish will run at Bendigo Showgrounds from 11 – 15 December. For tickets, head to www.bendigoregion.com.au/arts-culture-theatres/whats-on.