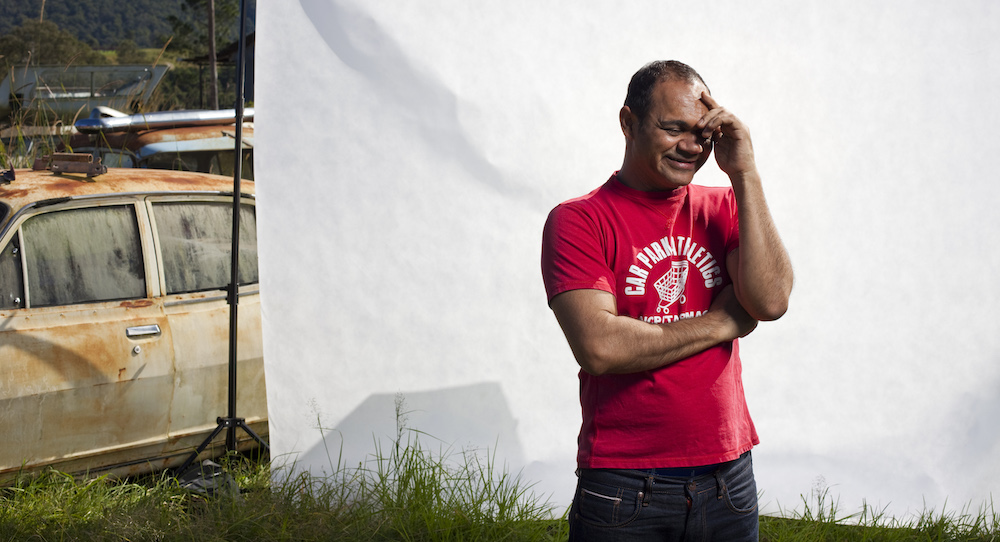 The word “family” is one of the many overused memes of marketing; but in the case of Bangarra Dance Theatre, its application is entirely appropriate. The name Page has been associated with Australia’s flagship indigenous dance company for a quarter of a century, most famously in the figure of its Artistic Director, Stephen. That two of his brothers, (dancer Russell and resident composer David), have etched themselves into the lore of the company is perhaps less well known. Whilst the former took his own life in 2002, the latter passed more recently in April 2016, and this December, Stephen Page will create an onstage tribute to his musical brother in Dubboo: Life of A Songman.

Aside from the obvious and deeply personal context for the making of Dubboo, the work also comes from the collective heart of the whole company and, moreover, from the disparate but connected clan that embodies Bangarra. “This is definitely special for me,” states Stephen. “It’s a gift for my brother, and not just from me but from the whole Bangarra family.”

Staged as part of Bangarra’s now annual “Carriageworks season, the show aims to celebrate and reflect by spanning almost as much terrain as David Page did in his lifetime. Through dance, live music, video and stills, voice recordings and drag, Dubboo explores David’s many angles. With fellow composer Iain Grandage (and attendant string section) providing a live musical homage, and appearance by the likes of Archie Roach, Ursula Yovich and Djakapurra Munyarryun, the end result will resemble an old time theatrical variety night.

Indeed, as brother Stephen explains, “Him as a composer, him as an actor, him as a floorshow, him as a drag queen; just his life really. So yeah, it’s just like selecting all the right things and celebrating the great man that he is.”

However, amidst the flurry of theatre, there remains something about the loss of a sibling that perhaps defies the reduction of public spectacle. Responding to this, Stephen notes, “It wouldn’t be unusual. We lived in the public realm. Also, the public are his fans, so in a way, doing this is a gift back to them.”

Bangarra’s ‘Dubboo – life of a songman’. Photo by Heidrun Lohr.

That said, the fuzzy crossover between public and private is never far from the surface. “So sure, we have our family ways of dealing with him and, you know, personally, I deal with him all the time in my own private way. But is he public?” Stephen wonders aloud, before answering, “Yeah, he’s public. He has a great story. You know, he’s done heaps and heaps of interviews talking about his music, so celebrating him and giving him a ceremony like this is…well, we’re not doing ‘sorry business’ here. We’ve already done that.”

For Stephen, Dubboo is an entirely appropriate form of celebration for David. “I was always trying to work out a way to pay homage to him, to give a gift back for everything he’s left behind, not just for Bangarra but for his family, and also just who he is. It’s two years and a half since he left, so it’s just a beautiful moment to have him in our programme.”

Indeed, in many ways, David survives in the heart of the company, not merely through his extensive body of composition (Ochres, Terrain, etc) but in the bloodlines that have united his family and one of the nation’s premier dance organisations. “He lives on in the echoes,” his brother declares simply.

When Bangarra lifts the curtain on Dubboo in early December, those echoes will resound louder still. As Stephen says it, “David this, David that, an all-new showman life. You know, and it’s gonna end with 20 Tina Turners on stage, just like him in his heyday.”