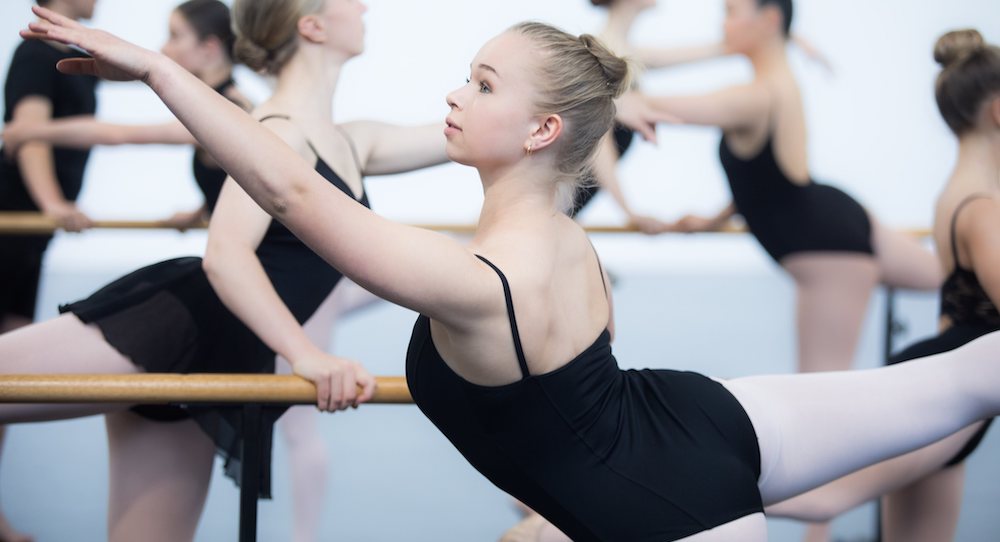 “We had a lot of 15- to 16-year-olds wanting to do more focused dancing training who were not mentally or emotionally ready,” explains Jayden Hicks, Transit’s head of Youth Development. “We wanted to create a bridging program that gave them a creative space to finish academic studies, while furthering their dance and moving them closer to a career in dance.”

Transit’s high school program helps to transition young people into a career in dance in more ways than simply enhancing their dance skills.

“We offer them staggered work hours,” Hicks explains. “Three days a week, they don’t start training until 12:30pm in the afternoon, and the other two days a week, they start at 9:30am. This is designed to help them transition from dancing mostly in the evenings, but we don’t want to rip them out of that routine immediately. Then when they go into full time, they are better equipped to handle the hours. It aims to eliminate the shock to the system that many experience when they come into full time training.”

Hicks describes the course as being very balanced, with equal parts academics, professional practice and rest, as well as being tailored to the individual.

“Dancers will get a grounding in all styles but also feel like they are being catered to,” he says. “We work a lot on mindfulness and body awareness, so we do Pilates, yoga and nutrition, so there is an understanding about their bodies, not just how they dance but how they work, and what will make them feel more energised and stronger.”

The high school program doesn’t include a performance element, but students have the opportunity to participate in performance through Transit’s Origins Dance Company.

“Origins runs two performance seasons a year, and you work with Melbourne-based contemporary dance choreographers,” Hicks explains. “You work on Sundays in five-hour blocks over eight weeks to create a brand new 20-minute work through things like task work and improvisation. There is a three-night performance season at the Transit Dance Centre, which features a double bill, so two choreographers work in the one season.”

He continues, “We do it in term 2 and 3, so it gives people a chance to settle into their year in term 1, and gives them the chance to focus on exams and wind down in term 4. We follow a very similar time frame to how professionals work. They learn the skill of working in short time frames, adapting to different choreographers, and committing to a 20- to 40-minute work, rather than just three-minute snippets.”

One of the things Hicks loves about his role at Transit is helping dancers develop realistic expectations about a career in dance.

“So many people come into full time training, and they haven’t got a realistic idea of what a job in dance is,” Hicks explains. “So we’re starting to introduce this to them a lot younger, and show them that this is what you could be doing. These are realistic goals you can set for yourself. People can get swept up in the fantasy of being a dancer, and they get through full time training and don’t really know what their options are. It either really sells it to them, or they realise that it’s not what they want to do.”

He goes on, “The main thing is they think that there is a job waiting for them at the end of their training. It’s just not true. It’s like the lottery. Some people win it, and some don’t. It doesn’t mean because you’ve entered the lottery that you will win. Same with your dance training. You have to be consistent and stick by it. You’ll get jobs, and you won’t get jobs. You need to put in time, effort, money and loyalty. It’s the same as any career. You need to network, talk to people and show up at events. It’s not just what you can do in the classroom.”

The high school program at Transit will help students to develop the non-dance skills required for a successful dance career. These skills are addressed in the academic classes offered, which are overseen by Carly Doctor, head of Academic Studies at Transit.

“That’s why I think the academy is a really good thing,” Hicks continues. “We can’t teach everyone the life skills they need in the dance studio. So we need to teach those things in a high school setting, in an academic class with someone who knows dance. Carly was a professional dancer who had an injury early in her career.”

Distance Education Centre Victoria (DECV) handles Transit’s curriculum delivery. “They will be in the classroom with Carly to keep them on track,” Hicks explains. “So they have a mentor and a specialised teacher. It’s a really cool way to work. It’s nice to have the one teacher you can go to for anything and point you in the right direction. DECV is just around the corner as well, so in their mornings off, students can join in on lectures and practical work in science labs. They still follow the curriculum, so still have that structure, but they have the freedom within one class of students that they can do whatever they want in terms of their subjects.”

Being brave for your art

Hicks is well placed to help young people develop a realistic understanding of the dance industry, having been a full time dancer and choreographer.

“I was a full time dancer and worked independently in contemporary dance for eight years,” he says. “I learnt a lot about bravery from the people I worked with. I’ve had plenty of knock downs, and I hold them close to my heart. I’ve been fired for silly reasons that weren’t my fault, and endured things you can go away and cry about, but you have to be able to come back from that, and have persistence in what you love. I never saw myself doing anything else, so I had to believe that bravery was worth something. When I started working with younger people, bravery was the biggest thing missing. Many didn’t have the bravery to have longevity in a dance career. When I was offered the job at Transit, I wanted to give students a sense of their worth and what they can offer the industry. If you are brave enough with your ideas and yourself, you can inspire people twice or three times your age.”

Students in the high school program will work a lot with the Transit Dance Full Time faculty, which includes professional dancers like Hicks, as well as Paul Malek, Daniel Jaber, Damien Meredith and Kyall Shanks, to name a few.

“We’re passionate about working with teachers who want to prepare students for full time and are with us on this journey,” Hicks says. “We don’t want to chuck people into full time courses just to fill the numbers. We want to make sure the students are ready and that we have the right team to do that. We work with a lot of working professionals, and all of us who work full time with Transit still perform and create in the industry. We also take the opportunity to introduce the students to as many professionals as we can. For example, last year, students had a class with Travis Wall.”

Transit has recently moved into a new dance-specific facility in Brunswick, so their students have the opportunity to train in a world class space.

“We have a 4,000 square metre building that we’ve completely redone and built into,” explains Hicks. “It was a lot of hard work to make sure we had the design right. There’s a massive foyer space, and seeing all the students out there having space feels like a school yard rather than a hall way. There are eight studios and two classrooms, and we have other buildings in the work to expand already. We have a photography studio as well, so we do a lot of in-house photography and video creation. We feel like we have a nice creative hub now. It has a nice open play gym, which we’ve always had, but it’s nice to expand it a bit. We’ve kept so much of the original building, with the white brick walls, the warehouse kind of setting, and big, beautiful windows.”

Finding the right dancers for the course

The high school program is an elite program, and Transit is seeking young dancers who already have existing training, but Hicks says they are also looking for something else.

“We are more focused on the potential and determination of dancers. If someone is willing to put in the time and is really passionate, we would take them over someone who can do seven pirouettes but isn’t committed. We’re about making employable dancers because of their ethics.”

Hicks notes that Transit is like a family, and they are looking for like-minded people.

“We like to work as a family. We like people who like us. We really encourage people to come in, meet us and talk to us, and see if we gel. Because it’s hard to pinpoint what attributes someone needs, as we get along with all different types of personalities, but to get the best out of us, you need to like and respect us and appreciate what we have to offer you.”

While Transit’s auditions for the high school program were held on 10 November, Hicks says it’s not too late. “If there is interest to attend from people who’ve missed the audition, we are open to meeting new people and having them come in for a trial class, or to talk with us about their next step and their journey.”