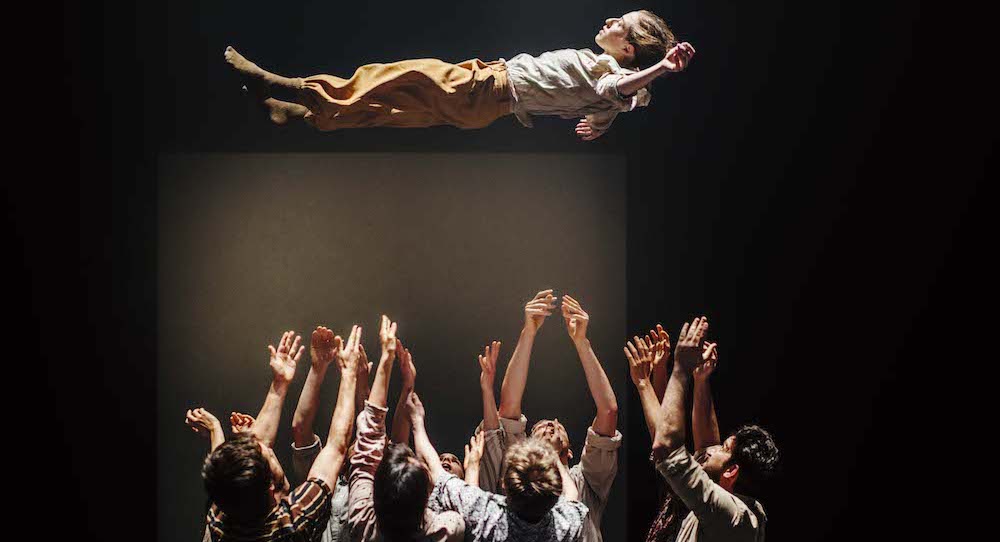 “I stole it from the world of classical ballet,” declares Israeli-born, London-based, Tony-nominated choreographer Hofesh Shechter of his widely acclaimed 2017 work, Grand Finale. “You know, just before your evening comes to an end, you have your apocalypse, your ‘Grand Finale’, and there was something that amused me about that. It’s kind of like, how do people deal with a world that’s falling apart? One of them is this feeling that actually we don’t care. It’s like a party where you and I both know that it’s not great that we’re using so much water but we do; and we eat meat and burn petrol like there’s no tomorrow, because, you know, it’s probably going to be fine.”

Yet, when Grand Finale makes its Australian premiere at the upcoming Adelaide Festival of Arts, it will not necessarily be an apocalyptic experience. Indeed, its creator is clearly no cut/copy doomsday prophet; rather, he is an artist (and, more importantly, a 40-something human being) who, like many of us, is perplexed by what he finds in the zeitgeist. Thus, the work teases out the fabric of our times and tries to see our current dramas in a context more nuanced than either the prism of “narrow presentism” or the panic-stricken simplicities that drive news content.

“It’s amazing how easily we get into this frame of mind, where we just party and it’s all fine and we get our grand finale,” Shechter observes. “But it’s a really pathetic finale in a way because it’s one where we think it’s grand, but we’re actually digging our own grave. I mean, I don’t know, maybe every generation has its own apocalypse but it never really happens, so you know, nature always prevails and everything just carries on.”

For those familiar with Shechter’s oeuvre, this kind of intellect and intensity is perhaps not unusual. Works like Political Mother and Sun reveal a passion for both mathematical rigour and athletic elasticity, and often allied to the former rock drummer’s propulsive scores. However, Grand Finale was partly an attempt to shatter previous moulds.

“Well, the first thing was just to make my life interesting,” he jokes, before explaining, “For an artist, it is very good to feel, ‘Oh, I did something that works for me and for my audience, so why won’t I do it again?’ But that’s probably the most dangerous and boring thing I could do.”

Thus, right from the outset, Grand Finale came together differently, with the addition of set design and live music and a trip to Italy for the 10 dancers who feature in the piece. “So, even though challenging structures can seem superficial,” he accepts, “it also pushes me to new places, to less comfortable places; and in discomfort, I have to work hard again to find out how to tell a story or focus certain energy and, you know, make a show out of it.”

For Shechter, the use of set (featuring movable objects designed by Tom Scutt) was the standout departure. “I never actually worked with a set before, so I was curious because normally I use the lights so intensely to shape the stage, but I wanted to know how it would feel if I could recreate the space with a set. So, my instruction to the set designer [Scutt] was that I wanted something really simple that could change from one scene to another.”

The end result of the development process is a set that allowed Shechter and his dancers to move and manipulate the architecture; and as an inventive challenge, collaborating with Scutt was clearly enervating. “Seeing the objects moving was quite impressive,” he recalls. “It was like seeing the world morphing, and I started choreographing them into the piece. It’s kind of weird for a choreographer to work with objects, but what’s really interesting is that it can create an emotional response.”

In keeping with the work’s theme of ending, Shechter began to blur the instinctive separation of object and person, particularly in the “dead body” sequences. As he says, “The idea is that a body is also just an object, a piece of meat, a piece of matter that can be shifted around. I loved the idea that we’re moving both bodies and constructions around, and it’s very cold and harsh but also very beautiful, depends how you look at it.”

Of course, Shechter brings a look to his life in dance that few others can. Not only is he is a drummer and composer but as a youngster completed compulsory military service in his home country of Israel; and although he was never in combat, his exposure to the more sharply defined existential realities of the Middle East has perhaps given him both an aesthetic and an intellect that few in the normally privileged world of dance would share.

“In my work previously, there was very little contact,” he illustrates, going on a tangent, “and so this time, I wanted to create scenes where all the 10 dancers are in constant contact and flow with one another, so that it’s this really slippery reality that keeps on morphing because, for me, the world is that kind of place, a reality you can’t quite get to grips with. So the piece is very solid but ever changing, and it feels like it’s all collapsing all the time.”

Whilst Grand Finale concerns itself with approaching end points, it does not dictate how we respond. Is it culmination or cataclysm, or a curious mix of both? Or indeed, unlike the neatness of evenings at the theatre, are all endings false, simply act one of the next show?

Hofesh Shechter’s Grand Finale will be presented 15 – 17 March 2019 as part of the Adelaide Festival. For tickets and more information, visit www.adelaidefestival.com.au/events/grand-finale.