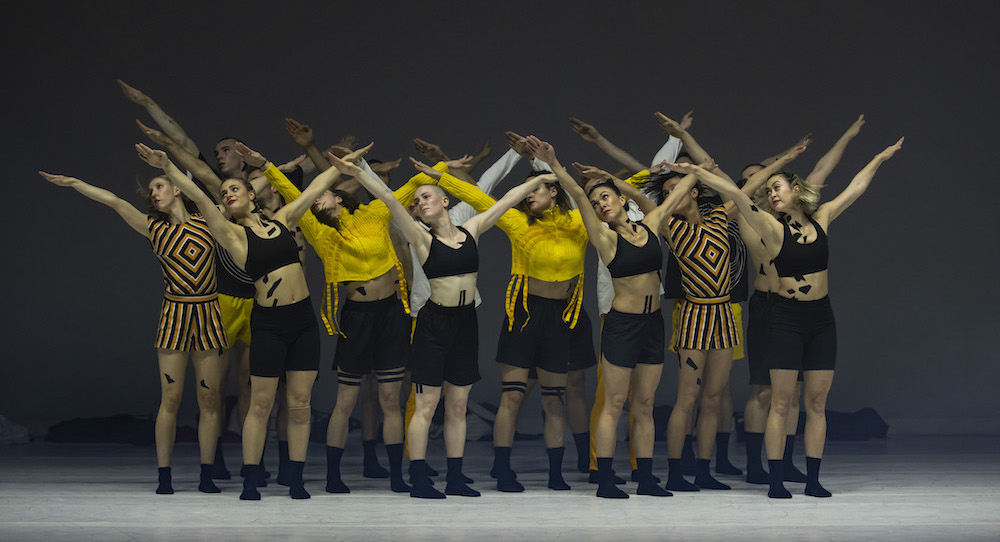 It opened with Rafael Bonachela’s Frame of Mind, this time with Bryce Dessner’s relentless driven score performed live by the Australian String Quartet. Dessner’s work was written as a musical evocation of home and flight.

Bonachela says his work is an examination of desiring to be in two places at once, and Frame of Mind is intensely, emotionally charged.

The work is an eerie, haunting abstract mood piece. Ralph Myer’s set – peeling painted walls and a window – evokes a sort of dream-like room of memories and melancholy, where time is in constant flux and the inhabitants seek to escape but are unable to.

Benjamin Cisterne’s fabulous atmospheric lighting adds to this mood, with much use being made of shadows and silhouettes. (The work begins with the dancers looming like sculptural figures in an Antony Gormley landscape.) Bonachela’s choreography is also extremely demanding, balletically based yet acrobatic.

The dancers are full of explosive energy and elegantly, powerfully perform Bonachela’s extremely demanding (at times seemingly almost impossible) choreography. Bonachela is masterly in his use of blocks of group movement for the electric ensemble, while simultaneously everyone appears to be doing his/her own thing. There are breakaway eruptions of tender solos and duets. Floorwork, rolls and a deep Graham plié are also included in this work.

SDC in Antony Hamilton’s ‘Forever & Ever’. Photo by Pedro Greig.

The second half of the program, the world premiere of Forever and Ever by Antony Hamilton, was, for me, after the extraordinary brilliant opening solo, rather disappointing. Jesse Scales has a luminous, compelling, extended, very demanding solo in silence to begin the piece. She uses each limb in isolation in a very challenging and mesmerizing performance. At the end of the solo, she picks up one of the handheld theatre lights, and Julian Hamilton’s (one half of The Presets) jittery, thumping, pounding, overloud electronic score begins. The work becomes a techno/rave party inspired by nightclubbing and fashion.

After Scales’s solo, there is a segment when a menacing line of figures in giant black cloaks slowly approaches Scales, waving the white cones on their hands in the air like undulating coral (Are they hooded vigilantes? Dementors?), and some wear black masks and white robes, carrying lamps that shine on the ground.

SDC in Antony Hamilton’s ‘Forever & Ever’. Photo by Pedro Greig.

The many layers of colourful clothing (designed by Paula Levis) are eventually stripped off, revealing casual, colourful streetwear, the dancers in caps and oversized puff jackets, red tracksuits and, at one stage, bright yellow tops with swirling geometric patterns that are also sloughed off to reveal basic black outfits, and the dancers are also wearing tribal-like black markings on their bodies and faces.

The dancers are expressionless, and there is no sense of engagement with the audience. At times, they strut like catwalk models; at one point, they have flickering, fluttering hand movements, and there are some very difficult lifts. Are they meant to be brushstrokes in space/on the page? In the final driven ensemble section, the cast are all doing their own repeated phrases of movement, concentrating on their inner worlds.

The younger audience members loved it and cheered wildly at the end.