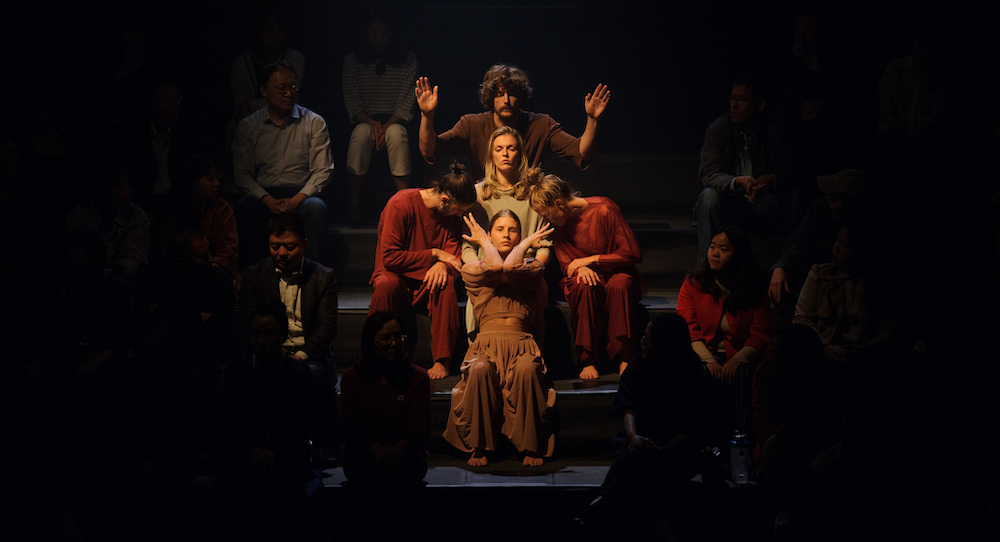 Perhaps without consciously intending to do so, the east/west creative team behind One Infinity have tapped into a vein of metaphysics and mathematics and, through movement and music, given us a glimpse of that rarefied realm where seeming opposites merge into unity. What’s more, they achieve (or stumble upon) this without recourse to didacticism; instead they utilise simplicity, broken symmetry and the often hypnotic beauty of the live score to transport us.

Of course, what director/choreographer Gideon Obarzanek and his cast do to help us get there is to get us involved. Audiences in opposing banks of seating are sporadically led through slow, mandala-inspired movements while the professionals from both Dancenorth and Beijing Dance Theater sit amongst us. Although the participation device is not new, here it is used with notable subtlety and, rather than simply breaking our focus and making us feel ill at ease, it allows us into the meditative space with the performers. Indeed, our involvement is the final piece in a boundary melting mosaic, one in which normally distinct theatrical and cultural elements coalesce.

However, the danger in all this “everything is all one” trip is that it can soon lurch into bourgeois approximation — just another commodity for wealthy Melbourne Festival goers to consume before the next wine bar. Whether the One Infinity team were cognisant of this is unclear, but what is obvious is that they worked hard to ensure that the choreography, the music and the staging underlined their prevailing and/also motif, the kind that sits at the heart of eastern logic (true, false, both, neither). Even the choice of a highly reflective floor is indicative of this. As above, so below.

From a purely dance perspective, Obarzanek and associate choreographer Amber Haines (from Dancenorth) employ a palette drawn from both nature and spiritual practise. At times, the dancers move like flowers opening, at others like reeds in a windstorm. We also get plenty of mirroring and intertwining but, cleverly, the symmetry is often slightly askew, as it is in the real world. The momentum of the work is therefore both circular and linear.

Yet curiously, this work also evokes elegance of another kind — that of mathematics. Aside from the obvious titular reference, we are given glimpses of the vaulting imagination that led Indian thinkers (Buddhists, Hindus and Jains) to conceive of ideas like infinity and zero. In this work, with its loops and iterations, and its lovely long fade to black at the end, the solidity and presence of the dancing body somehow moves in sync with the ethereal cosmos of numbers. Again, maybe they didn’t consciously intend it, but the One Infinity team nonetheless open up this most beguiling window for us. Look through it and see what you will.