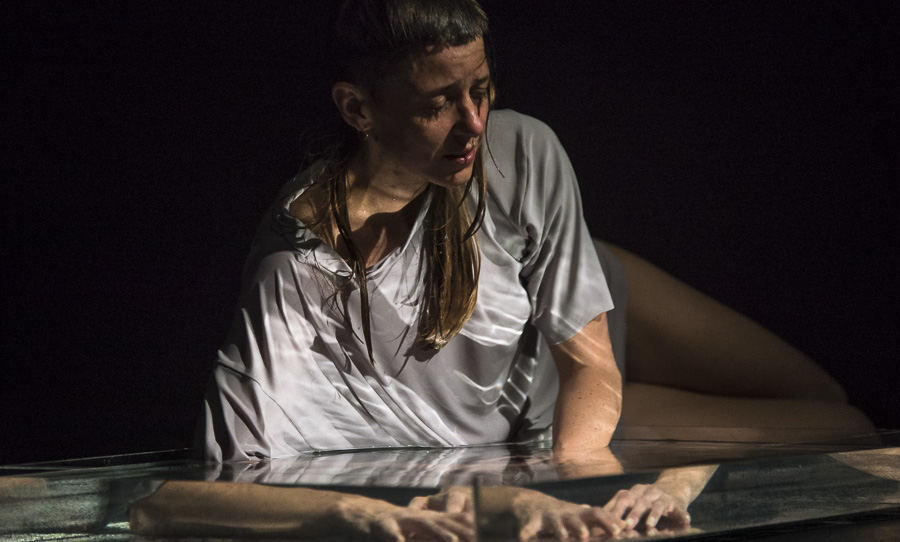 Usually, if there’s a fern on stage, it’s either a prop or a decorative object. Yet, in Rhiannon Newton’s We Make Each Other Up, the fern “sings”, with composer Megan Alice Clune wiring the plant to her keyboard to produce a wash of deep, nigh respiratory sound. The result, if you’ll pardon pun, is a subtle but powerfully earthing envelopment that draws us in, much as an autumnal forest might. And so, just as the tides of our breath anchor us to a core cycle, this plant-based soundtrack somehow serves to weave us into the work, not simply as a passive group meditation but as part of the vast organic unity that the work seeks to evoke.

Whilst this may tell you little about the qualities or otherwise of the work (other than to alert you to a cute production quirk), it is central to the exercise and thus to the audience experience. For here, choreographer Newton is quietly and incrementally dissolving the usual delineations we make between self and other, between humanity and nature. Just as the plant is now a performer, so the four dancers gradually, in a vine-like way, become entangled until, along with the fern and we in the bleachers, they are folded together – individual, yet indistinguishable when observed as part of a greater homeostatic whole.

That said, at the level of performance, We Make Each Other Up is a slow, sinuous and undeniably sexy hour or so of dance. The movement palette clearly draws upon the branching networks inherent in the growth patterns of plants and the wet, organic feel of soil and sap. It gradually unfolds, seeming still at times but then writhing and shooting out tendrils. Punctuated with bursts of text, it moves from its starting solo and proliferates into a foursome before ending, like dusk, in cool, dissipating whispers and the hush of nightfall. Perhaps it is the arc of a day or a species, or even of existence itself. Cleverly, Newton leaves room for us to ponder these ideas ourselves by remaining on the right side of the line that divides artful evocation from tiresome placard waving.

Those of you versed in contemporary dance will know of its often ponderous and over-wrought tendencies, and, to be fair, Newton skates a little in that direction. However, her discipline wins out and restraint is duly observed. Whether or not this is because she began with the idea of the stillness of plants (with their patient gathering and unassuming transformative power) is, in the end, a less interesting question than the resulting work, which is meditative and beautiful. Indeed, you may well emerge from Newton’s vespertine biosphere feeling calm and floaty.

We Make Each Other Up is an inescapably earthy experience, like the smell of damp ground. It sighs rather than screams, is cyclical rather than linear and pagan rather than churchy. Yet, in a delicious twist, it keeps its eye on an abstracted, networked future, and this gives it a strangely eerie, almost ominous quality. At once thoughtful, gradual and sensual, it is an invitation to a garden of potential, to an Eden on the brink of apples.