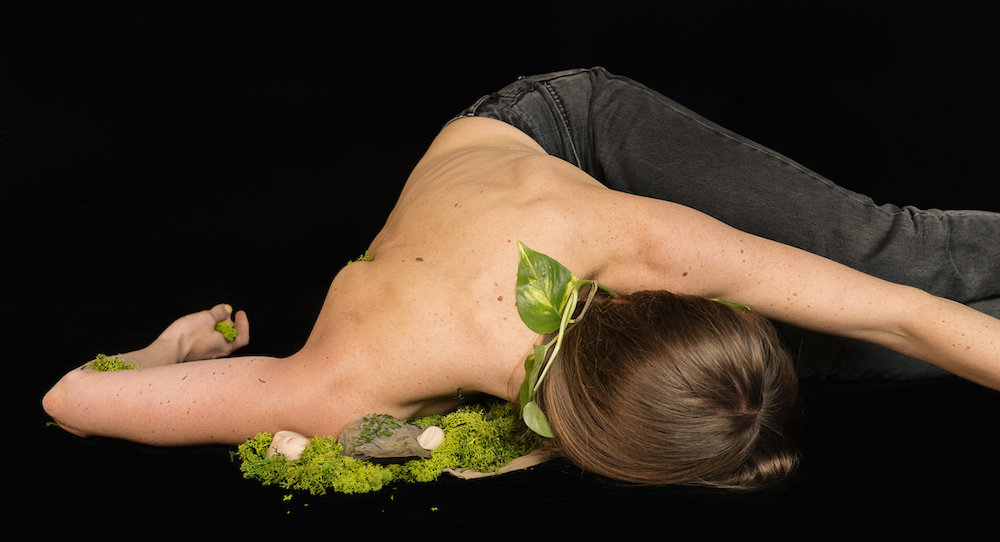 In the midst of a clickspeed culture, where high paced busyness and visible attainment is the acme of credibility and cool, what does it mean to stay put? To be where you are?

When Sydney-based dancer/choreographer Rhiannon Newton asked herself these questions her response, creatively, was to make a work inspired by plants. As she recalls it, “At some point last year, I was feeling, maybe, a bit burnt out; and I remember looking at this big tree and going like, ‘Ah, that’s so much a better way to be in the world.’ You know, kind of just stay in one spot and be useful to the things around you by, like, improving the air.”

Rhiannon Newton in ‘We Make Each Other Up’. Photo by Phebe Schmidt.

The irony of Newton also being an independent artist in the current milieu (where spectacle, self-branding and the linear objectives of production and marketing are the norm) is not lost on her. Indeed, it is very much part of the fabric of We Make Each Other Up, a new “plant-based” work that will, [coughs], flower later this August at Dancehouse in Melbourne.

“If we all just stopped trying to be so fabulous and kind of get around the world and make ourselves famous or something, some different kind of work might be made,” Newton contends. “It’s not that I’m interested in some sort of reduction or dealing with less interesting material, I just think that there’s something to be gained from attending to the details and to the different kinda qualities that are in your vicinity.”

Inherent here is the seeming dichotomy of the motionless plant and the dynamic dancer. Yet, for all that, We Make Each Other Up is not confined to meditating on stillness and other absences. As Newton explains, the plant motif and the coincident fact of her being this year’s Housemate (Dancehouse’s artist-in-residence) has allowed a slowing that, in turn, has generated a more deeply considered and detailed reflection on context. For just as the plant exists in a strictly contextualised world of soil, sun and immediate surrounds, so too the human animal is embedded and emerges from an environment of context.

“So, when I got the Housemate thing, which is a 12-month residency, I was like, ‘Well, this is an opportunity to actually have the time to dig a little deeper into my context; which is, you know, I’m Australian, I’m sort of coming out of that ‘emerging artist’ phase, a lot of my teaching and influence is from European and American perspectives, and my body really inhabits those techniques,” Newton elaborates.

If, in a way, she is partly re-imagining herself as a plant, by throwing down roots and entering into a more symbiotic exchange with her environment of being, Newton’s work is also giving the plants a voice. Indeed, in collaboration with composer Megan Alice Clune and some very smart tech, she is allowing the sound palette to become a little more organic. “Megan had been wanting to work with this ‘instrument’ that sort of takes these signals from plants and translates them into electronic signals and then into sound,” she reveals. “So basically, we have this beautiful big palm fern in the space, and she’s connected to it with electrode pads on the leaves.”

Naturally, enlisting a fern as a live performer incurs certain risks, as Newton is quick to note. “It sometimes sounds a bit like rushing water or something, but it’s also quite emotional; like, sometimes it just won’t perform. We’ve had a few times where it’s been really loud and excited and others where it’s been more quiet.”

Doubtless inspired by the less linear modes of vegetation, Newton has consciously altered her usual modus operandi, allowing the work to develop in ways that mimic the branching networks of plants and other organic systems, like the human body itself. “Often with my past works, I kind of imagined a performance that went for an hour, and I’d kind of go like, ‘Ah, I’ll start this way and I’ll end this way and I’ll construct these bits in between,’ but this was an opportunity to start really differently. So, I haven’t started out with a map for the whole thing.”

Rhiannon Newton in ‘We Make Each Other Up’. Photo by Phebe Schmidt.

Teasing apart the plant/performance synergies further, we come to a philosophy of movement, one it seems that has informed the development of We Make Each Other Up. For Newton’s investigation here is also about the ways in which our individual and cultural identities are rooted in the ground of ancestry, zeitgeist and memory. “The movement is not interested in radical or new or innovative,” she boldly declares. “It’s more like, the kind of things that come up, come up; and that’s because they’re here and they’re in us, and they got there for a reason and maybe I could take care of them a bit more closely. So then, maybe I become a bit more aware of how they got there and what my blind spots are and so on.”

Perhaps, in the subsoil, there is also something here about mutuality and inter-dependence, and about the greater homeostasis of the living system we all come from and entirely depend on. In an era of the atomised individual, we might regard this as a subtle form of plant-like resistance. Or maybe we’ll leave the last word, rebellious or otherwise, to the onstage fern.

Rhiannon Newton’s We Make Each Other Up will run 29 August – 2 September at Dancehouse. To book tickets, click here.