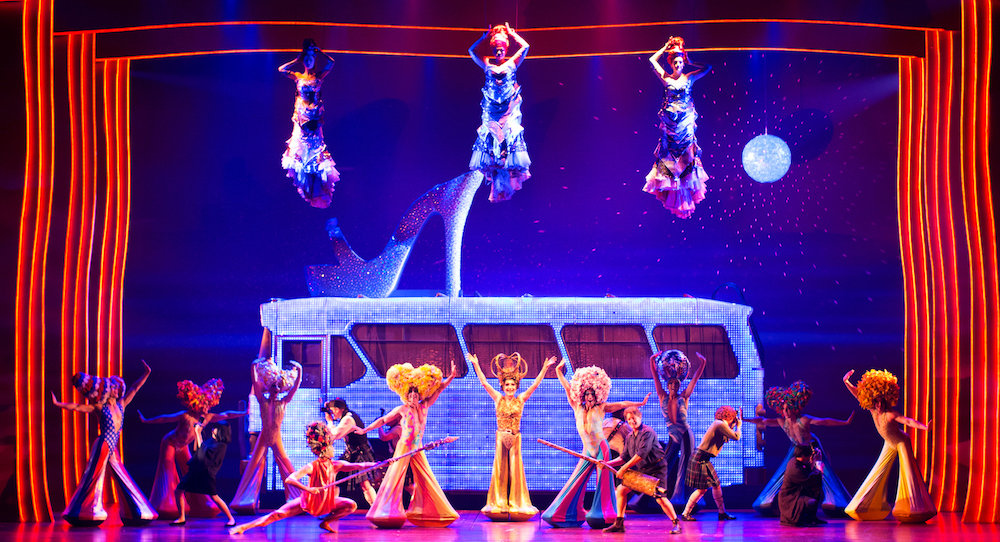 It’s been an iconic piece of Australian film history since the film first exploded onto our screens in 1994. Since then, the epic drag queen journey of Priscilla, Queen Of The Desert has been a staple of entertainment across the globe, having its soundtrack performed to audiences young and old for nearly 25 years.

Tony Sheldon as Bernadette in ‘Priscilla, Queen of the Desert’. Photo by Ben Symons.

August 23rd saw the fabulously flamboyant feature film flung feverishly into Adelaide’s Festival Theatre in a visual alitteration of sequins and sass. It was time to shake our groove thing to the hottest new/old show in town, and it was a fine romance indeed.

Bernadette (Tony Sheldon), Tick (David Harris) and Felicia (Euan Doidge) take us on a hilarious adventure through the centre of Australia and right to the centre of our heart. There wasn’t a stationary bum in a seat as audiences were treated to a musical extravaganza performed by veterans of the original touring cast. Tony Sheldon easily stole the show with his perfected role of Bernadette, his 1760 show experience certainly his worth and versatility as an actor.

The costumes are as creative and vibrant as ever, and the iconic pink tour bus leaves nothing to be desired; however, this reporter as now been privileged to have seen this show a total of five times in various cities, it’s unfortunate to note that due to the lack of orchestra pit and small stage size, the show was not able to create quite the same magic or ambiance as its larger city productions. Less area to dance leads to somewhat lackluster choreography that may have been improved with a larger ensemble size, and there were some underwhelming vocal numbers that left me wanting a little more, but over all, the well-known music storyline made for an enjoyable night.

Despite a few minor shortcomings, the show prevailed and proved that it will survive! Be sure to arrive early to avoid parking troubles, or catch the newly extended tram line. With only three weeks left of its South Australian residency, it’s a timeless classic that’s not to be missed. Grab your body glitter and fix your wigs, and get yourself tickets to see Priscilla, Queen of The Desert!

By Jessie Krieg of Dance Informa.