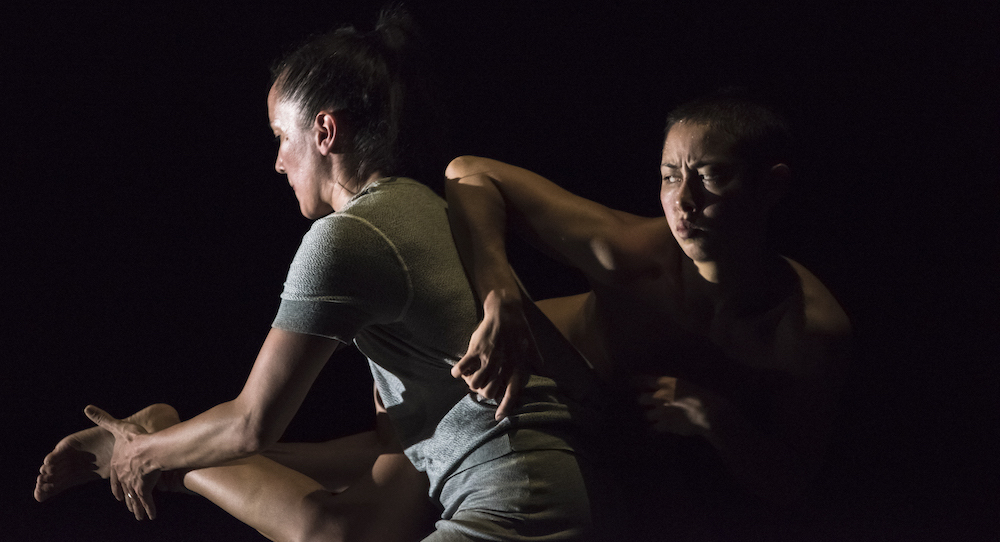 The audience are seated in the ‘Studio’ at the Sydney Opera House, where graduated seating rises around a black, perfectly square dance space below, kind of like an upmarket boxing venue. No props; no clue as to what is to come.

As the two dancers enter the space, it becomes apparent that one dancer is naked, while the other is fully clothed in a frumpy dress; one is older, with the other young and almost androgynous. Initially, the naked body is disconcerting and raises the question, “Why?”

There will be many questions raised during this perfectly constructed and mesmerising performance.

Lucy Guerin and her company, Lucy Guerin Inc, are known for “left of centre” concepts, and this work is no exception. Originally presented as part of Dance Massive 2017, SPLIT has to be one of the company’s best works to date, as confirmed by a number of awards, including the 2018 Helpmann Award for Best Dancer for Lilian Steiner and a number of Green Room Awards.

Using the whole square space, the dancers move in perfect unison, using a high degree of precision and repetition with relatively simple movements, a vivid reminder of the work of Anne Teresa Keersmaeker.

The music, by Scanner, is a simple, repetitive pulse, which seems to have its own ebb and flow, despite being simply a two-minute track put on loop.

This first section appears light and innocent, the movements bringing to mind the simplicity of folk dancing. There is a hypnotic flow as the audience is drawn into their world. Or is it our world?

Thirty minutes elapse and the dancers stop, wipe off the sweat and divide the original space in half with the dancers now restricted to dancing in one half of the original area. There is a palpable change in mood along with the change in space, becoming tense, angry – a couple in the midst of relational conflict or an abstraction of our world with overpopulation, tension and aggression?

Melanie Lane and Lilian Steiner are exceptional in building emotion, pain and conflict as the space is halved again and again, with the time spent dancing also SPLIT in half, which drives the intensity. With the added tension of closer and closer proximity, there are movements which could be labelled “operatic” – the naked dancer on top of the dressed dancer, seeming to pull the entrails from her belly. Hair is pulled; there are battles and silent screams.

The final square is only big enough for one dancer, thus requiring the smaller naked dancer to climb onto the older character.

SPLIT is a feat of abstraction, leading the audience to ask questions as to what it all means – perhaps the arc of a relationship, from initial contentment and understanding signified by perfect synchronisation between two, to the frustration and discontent of an aging relationship as the dancing becomes more individual with a lack of being “in sync” and the loss of any initial feeling of innocence or lightness in the movements.

The naked dancer is intriguing and certainly adds something to the work with a sense of vulnerability, while the older dressed dancer seems to be her antithesis, or aging self. Is this a work portraying our own split selves, a struggle between body and mind, with the nakedness representing innocence and vulnerability?

The lighting by Paul Lim is understated and complements the curves of our androgynous dancer, rather than creating full exposure. The change in lighting on the single wall matches the mood changes as the characters SPLIT. It is a rare masterpiece of human struggle in less than an hour.