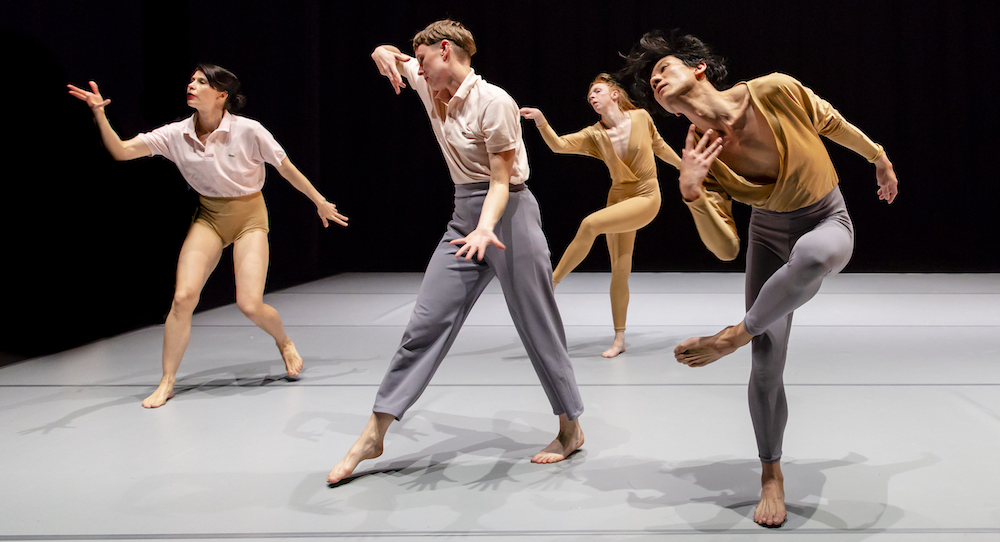 “Meta” may well be the new ordinary, but, cleverly and playfully employed, it can still be an absolute delight. Thus it is with Jo Lloyd’s lithe and frequently comic four hander, Overture, which, although steeped in self-reference, manages to transcend the current navel-gazing orthodoxy by rendering it both absurd and deliciously complex. The net result is a work of deep intellect, laser guided satire and theatrical physicality.

However, underpinning Lloyd’s mix of dance and visual art motifs is the idea of what we might call “the gaze”. Overture looks at the commodity of the idol, or the hero — those stars and other public figures we admire or criticise from a distance. In one particularly brilliant sequence, the four dancers (Lloyd, Deanne Butterworth, Rebecca Jensen and Shian Law) work with square frames to show us the often unacknowledged dichotomy of in-frame/out-of-frame. In other words, we see what’s in the frame but generally ignore or forget what sits outside. And of course this is true of the work itself. We only regard what Lloyd and company show us within the rectangle of the stage and the span of an hour; and yet the work also includes all the unseen elements of training, development, rehearsal and so on. Indeed, even though we see the dancers in states of undress, we still don’t really see full human beings. With our gaze, we transfigure them, and we are left with the heavily edited distillations of narrative, performer/persona and spectacle.

This train of thought is superbly underscored by the staging. The use of multiple veils and the floor to ceiling poster image of the performers let us in on the secret, making it plain that a simultaneous process of showing and obscuring is taking place. Indeed, to reveal the one is to hide the other, and with our gaze we both see and overlook.

Whilst this seems high-fallutin’, Overture is actually a lot of fun. Dance fans will doubtless enjoy the comic mimicry of much loved choreographic standards, especially the curtain call joke at the end. Thus, although the work has a serious head, it retains a light-hearted elasticity that leaves room for theatricality and pure enjoyment.

Combined with Duane Morrison’s moody electronic score (plus a little Mendelssohn?) and Jenny Hector and Andrew Treloar’s conceptually compelling set and costume design, Lloyd’s supple, irreverent choreography delivers intellectually and aesthetically. Overture is clever, tongue-in-cheek, brisk and timely. It peels back the wafer thin skin of celebrity, image-making and performative norms to show us our own gaze; and in Lloyd’s canny hands, the sight is well worth the watching.