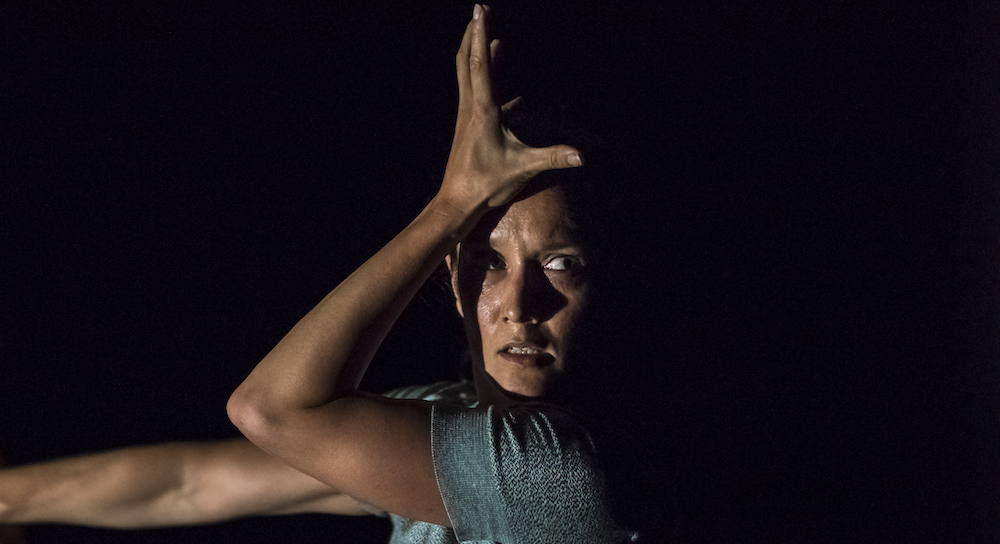 Lucy Guerin’s work has been described as “poignant” and “provocative”, “contemporary dance that reaches back to the roots of ancient theatre”.

Dance Informa caught up with Guerin in between international tours and relocating to new studios, just before the run of her award-winning Split as part of Sydney Opera House’s UnWrapped season this 8 – 12 August.

Split and the creative process

After having worked collaboratively on a number of larger works in London, Guerin was keen to get back into her own studio to explore the fundamentals of choreography with two of the dancers whom she knows quite well.

“To really work with time, and space, and movement in quite an intimate environment,” Guerin describes of Split‘s creation. “The process started from various movement ideas, but it went everywhere, as many of my works do. So, there were times when we were working in big cellophane bags, and learning cartoon movement off YouTube.”

The strongest idea was one of leaping, repetitive movement, Guerin reveals. What finally evolved were two contrasting moods – a very set developmental movement and some partly improvised material which is “quite dramatic in the operatic sense, and eccentric for the individual dancers.”

To frame these contrasting movement pieces, Guerin decided on a simple structure of space through time, starting with a large square which fills the dance space, where the dancers dance for 20 minutes. Both time and the space halve, until the dancers end up in a very tiny square.

“The structure becomes more and more compressed, which can be abstract, but there’s a lot of different associations for people, with the space and time getting tighter and more constricted,” she explains. “Some people will see it as a metaphor for a relationship, which is becoming more and more about negotiating time and space constraints.”

Guerin continues, “It ended up being quite a dark piece with a real intensity about it. It’s really an abstract work, but it seems to bring out quite strong images for people, and I think that’s partly because of the clarity of the structure.”

“I feel that the dancers are my collaborators,” Guerin says. “I rely on them to take my ideas, my thoughts and visions, and realise them, be part of the creative process.”

For Guerin, the dancers are her starting point. She uses them to find the movement which will set the tone and style of the work, rather than starting with music. Her usual process is to leave the music until later. It plays an important role in the process but typically is not the driver. Surprisingly, with Split, this wasn’t the case.

Guerin had been working in London with a UK composer, Scanner, who recorded a series of different types of beats and pulses for the piece they were developing for Rambert.

“While I was rehearsing Split one day back in the studio, I put on one of the pulses we hadn’t used,” she recalls. “They were all really short, and being only two-and-a-half minutes long, I put it on loop on iTunes. There was something about the ebb and flow, the way it built and receded, that was interesting. It sounded like it was evolving, despite only being two-and-a-half minutes played over and over. It seemed to support the work really well and gave it a sort of momentum and drive.”

Guerin says her favourite parts of the work are “the five-minute section, a complex dance duet, for the two dancers with this really interesting, strange rhythmic and physical quality between the two of them. I always look forward to that part.”

She goes on, “But there’s also something really weird in the improvised, more operatic section. It’s some strange, interrelation between Melanie and Lilian, where they have these power struggles. It’s very restrained but also quite violent in some ways, tense and contained. A really different quality to the more choreographed section. I love seeing what they’re going to do, because it is also partly improvised, so they’ll always do something slightly different; plus, it’s a bit dark, and a bit spooky.”

Lucy Guerin Inc. has three tours of Split in the second half of 2018. The benefits of touring include the dancers having more opportunities to perform the work and build their skills, while Guerin gets to watch the work more, both of which keep the work evolving.

Guerin adds, “It’s really interesting to present your works to an audience which has never seen your work before, and how they respond. You get a really different take on the work, but it is a shame that Australia doesn’t have a better network for touring small to medium companies and independent works. I guess it’s just really hard to sustain in Australia.”

“I’d say the way we think of research is practical,” Guerin shares. “It’s more like a practice-based research; we don’t have an academic relationship to research.”

One example of collaborative research is Guerin’s work with Scott deLahunta, who came in on the first developmental stages of a new work. DeLahunta’s research interest is about ways of documenting dance that isn’t video, developing software to enable the annotation of video footage.

It’s a very busy time for Lucy Guerin Inc. with the company’s move, as well as touring Split again, not forgetting a short residency in Bandung, Indonesia, with a group of heavy metal singers!

But she seems unperturbed. “Yeah, it’s busy,” she says, “but it’s also exciting!”