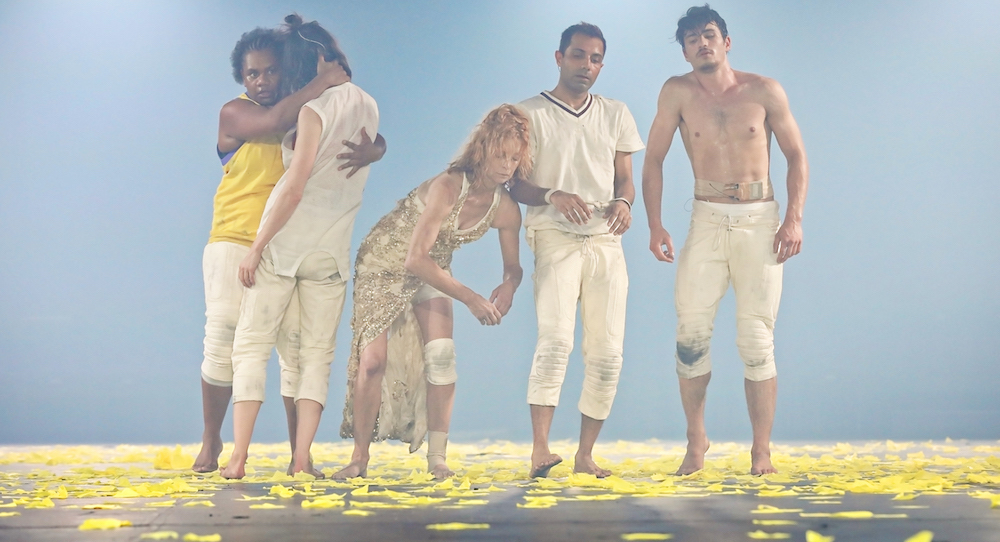 The latest work from Force Majeure, You Animal, You is a world premiere that is dark, disturbing and, at times, almost overwhelming. Some of it is cold and cruel, while other segments are eye-catching and lyrical. It is perhaps in a way a blend of dance and sport. Directed by Danielle Micich, the work has an extraordinary multi-talented, diverse cast of five.

The concept behind the work as proposed in pre-performance publicity doesn’t really come across. The text is by the company’s Artistic Director Micich and actor Heather Mitchell, written in collaboration with the other performers, and with Sarah Goodes as dramaturg. It was suggested that You Animal, You questions what makes us human in a desensitised age, and explores our repressed animal selves, especially that most primal of human senses, smell.

As the introductory note in the theatre flyer/programme says, “Part game, part voyeuristic exercise, the work examines how we often deny the driving primal senses within us, forcing them into a place of shame.” This sort of comes across, but not really. Some of it is vicious and violent. The “games” are tightly choregraphed fights.

There are some brilliant monologues, rather poetic at points, and it is strikingly presented. Damien Cooper’s lighting (be aware that strobe lighting is used) and Kelly Ryall’s music considerably enhance the powerful staging and the somewhat chilling futuristic atmosphere. There is a looming circular lighting rig (also used for haze effects) and a wind machine for the bursts of ticker tape.

Bay 20 of Carriageworks has been reconfigured with the audience encircling the huge performance space in two rows. As we enter, we are greeted by Ghenoa Gela as “Yellow”. While taking our seats, one of the performers (Lauren Langlois) is writhing sculpturally on top of a partially inflated giant piece of plastic at one end of the room.

As the other cast members emerge, it becomes established that Heather Mitchell’s character – a sort of half mad, domineering, imperious, bitter and manipulative queen in a grubby corset and torn white and gold sequined dress – rules this darkly futuristic place. Mitchell uses a megaphone occasionally and is often perched on top of a rolling umpire’s chair.

You Animal, You showcases five marvellous performers: Mitchell, who is known primarily for her work in straight drama, and Langlois, Gela, Harrison Elliott and Raghav Handa, who all have dance experience. It eventually becomes obvious that Gela’s character develops as a foil to Mitchell’s —  helping other trapped cast members (“competitors”) and trying to lessen the violence.

You Animal, You’s narrative develops in a “game”-like setting, where Mitchell’s character commands proceedings and various yellow ticker tape explosions and forces and challenges the others to compete various dystopian “games” (really fights ), with allusions to wrestling and The Hunger Games. Toward the beginning, the cast make their way around the performance space energetically and enthusiastically, bouncing on their toes, or with leaping, stylised runs and/or lunges similar to martial arts workouts. There is slithery floorwork, and edgy, semi-robotic moves are included at points, as well as sinuous club-like dancing.

One of the major highlights of this production would have to be toward the end, when, as Mitchell’s character tells her story, with a monologue about mothers and giving birth, Elliott performs inside the now blown-up oversized inflatable clear plastic bag. Rolling and flipping inside it, he travels down the performance space, at first clothed, but then he bursts from it naked – a baby? Or Adam? He slides, slips, sniffs the air and explores space in a puddle of water like a stallion. Birth and death are mesmerizingly depicted and poetically analysed.

Overall, You Animal, You is a striking, visually arresting, thought-provoking work.