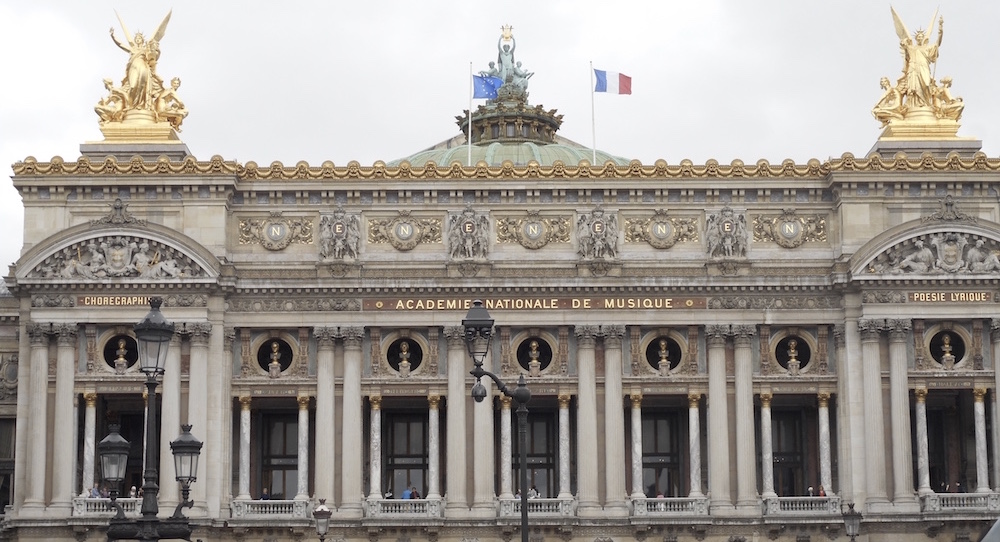 Dance, in its myriad forms, is the creative connection that artists and performers strive to forge with an audience. But just as significant as the artists and the work is the place/space where these works are created and performed.

Dance Informa starts a new series looking at a range of significant, iconic and quirky dance spaces throughout the world and their role in creating, presenting, preserving and shaping the living art form of dance.

The first in the series is the Paris Opera House, or Palais Garnier, located at 8 rue Scribe 75009 in Paris, France.

One of the most world-renowned and architectuarally beautiful buildings in the world, the Palais Garnier, is home to both the Paris Opera and the equally respected and famous Paris Opera Ballet, where approximately 154 dancers call this dance space their daily workplace, along with the many other varied creative artists in residence.

With its history and architectural style both functional and flamboyant, this magnificent building is one of the premier performance spaces in the world, with an average of 380 performances a year seen by approximately 800,000 people.

In 1861, at the request of Napolean III, Charles Garnier designed and undertook the construction of the Garnier Opera. This was to be the “new opera house” built for the people, accessible to all; although, from the cheapest seats, you’re not going to see much. It finally opened in 1875, interrupted by the siege of Paris from 1870-71, when it was transformed into a very large shop!

A scene from ‘Relève’ in the Palais Garnier.

Take your place within the theatre, surrounded by over 2,000 other red velvet seats, including private loges or boxes rising above you all contained within a horseshoe formation. The metal sructure holding everything together is hidden by vast amounts of marble, stucco velvet and gilding and crowned by an eight-tonne bronze and crystal chandelier with 340 lights.

And then there is the stage, where dreams and fantastical creatures enthrall us with stories of love and betrayal, where swans take flight and lovers plunge to their death or rise to life, danced on a stage of such mythical proportions that it is hard to comprehend its enormity.

Unique in Europe, the Palais Garnier stage is constructed of oak flooring laid on a six percent incline toward the audience, providing the illusion of more depth and a better viewing for the audience.

Behind the stage and rarely seen by the audience is the “Foyer de la danse”. In the 19th century, only select financial subscribers to the Opera Garnier were admitted to this privileged Foyer, and it played the important social roles of meeting place, salon and courting space that provided inspiration for both the author Honoré de Balzac and the impressionist painter Edgar Degas.

In more recent times, the Foyer took on the more practical role of daily rehearsal space for the corps de ballet, as well as the dancers’ warming up and practise space used before and during performances.

During larger productions or special events, such as the annual procession of the corp de ballet, the Défilé, the Foyer de la danse is exposed, completely confounding our sense of perspective by creating the illusion of dancers arriving from a far distant horizon.

This enormous institution is a museum in itself, preserving over three centuries of opera artifacts. Walking up the Grand Staircase, you will be confronted by massive statues, intricate iconography and luminous gold-plated finishes. Above and underfoot are brightly coloured mosaïques. No wonder the Grand Staircase is the ultimate “selfie” spot.

Once seated inside the theatre, glance upward, to the ceiling painted by Marc Chagall in 1964, not always appreciated by the patrons, some of whom may have preferred the previous ceiling, which is still there, hidden and protected above Chagall’s.

Managing this venerable institution requires literally kilometres of corridors and numerous levels to house administrative offices, wardrobe, as well as rehearsal studios, with names such as Petipa or Nureyev. No doubt you become accustomed to dancing in a space which was built in the era of Napolean III!

Then there are the legends. The “Phantom of the Opera”, based on the book by Gaston Leroux, includes the iconic scenes of the phantom and the mythical lake, under the Paris Opera House. This is based on reality, as there really is a reservoir of water under the Palais Garner, which was part of the original plans in order to both stabilise the building’s foundations and provide a reserve of water in case of a fire.

But the Palais Garnier isn’t just a museum staging venerated classical works. It is a vibrant performance space that connects the classical works of the opera and the ballet with contemporary works. The current ballet season, running through mid-November, includes Joyaux, a Balanchine “jewel” ballet, as well as two contemporary works, including The Rite of Spring by Pina Bausch and a new work by the Japanese choreographer, Saburo Teshigawara.

For those dancers who have aspirations to dance on this mythical stage, there is an annual exam to recruit dancers outside the Paris Opera Ballet School. In 2017, this was held on 6th July and is open to all candidates under the age of 26.

Hannah O’Neill, a New Zealander and previous student of The Australian Ballet School, was accepted into the corps de ballet via this external process at the age of 20 and is now a soloist, or première danseuse, with the Paris Opera Ballet.