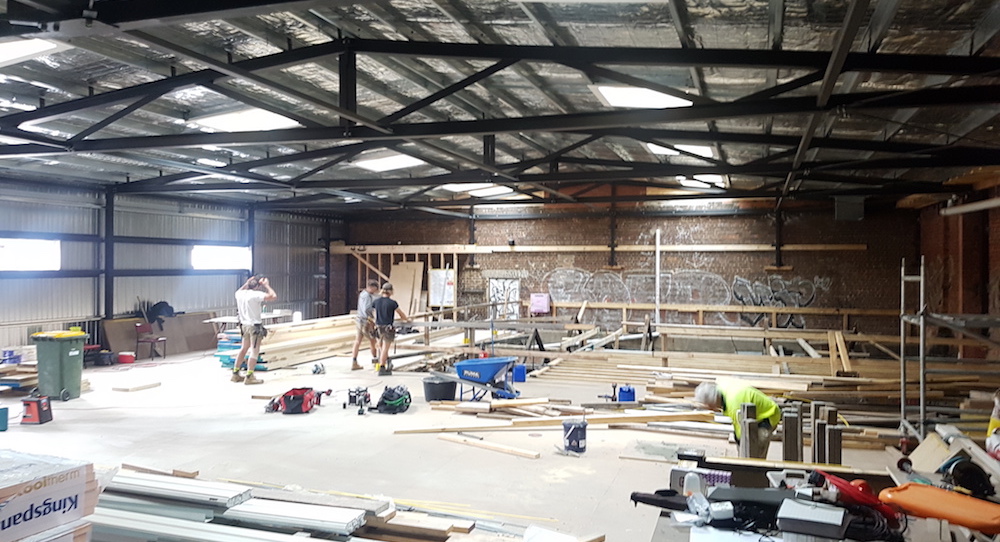 One of the Melbourne dance community’s most treasured resources, The Space Dance & Arts Centre in Prahran has recently been forced to undertake major surgery. The loss of an entire building to property developers and a huge rent spike has not only prompted a redevelopment of their existing space but sent co-founders, Ariel Bud and Deb Cantoni, down the nerve-racking, all-or-nothing path of crowdfunding.

Although they have clearly come a long way since opening in January 2001 (just a few months after they first met), Bud and Cantoni now find themselves at a crossroad. Indeed, the construction of the new Skydeck space and the Pozible campaign to help bring it to fruition have effectively put the last 17 years into perspective and on the line.

“When the building next door got demolished, the owner of this building tripled the rent, and so our rent now is six times that of when we started,” Bud explains. “We used to have the building next door, which had a similar sized performance space and our full time course was in there, but that’s now gone. Anyway, the owner here agreed to build The Skydeck, and we took the floor out of next door to put up into the new space. Unfortunately, the new room is bigger than the old one, and so we don’t have enough floor to cover it.”

As people in dance know well, there are floors and then there are floors. A high quality sprung floor for classes and performances is as much about dancer health as anything else, and so neither Bud nor Cantoni could countenance not going the extra mile. Indeed, as the latter notes, “You can do things very cheaply and put down a chipboard floor, but we wanted to match what we had in the old space and make it as functional as possible. A lot of people had said to us previously that [the old floor] was the best dancefloor in Melbourne, as far as being able to work on it, so we thought we would try and replicate that in the new Skydeck.”

Hence Pozible and a $60k fundraising effort. As part of the campaign, they have a suite of incentives (which includes everything from free pizza to one-month passes and full-year memberships), and of course their pitch video. When they kicked off the campaign in November, they were both very confident of success.

“We think that the rewards that we’ve put forward are just extraordinary and the value is unbelievable, but we just haven’t seen the volume of take-up that we expected,” Bud admits. “We thought it would be over-subscribed in just a few days.”

However, with just days to go – the campaign ends December 15 – they are well short of their goal and, hence, because of Pozible’s “reach the target or get nothing” policy, are facing the prospect of receiving no funding support whatsoever.

Meanwhile, Cantoni is finding it hard to hide her anxiety. “I am beside myself stressed,” she reveals. “It’s funny, but I wonder if people think we’re doing it easy; you know, because we have so many students and it’s always so busy. I mean, really, we have been pretty lucky to have had such great support from the community, but even so, when you’ve got seven full time staff and all the rest of it…”

Viability issues are nearly always front and centre for arts-based business and practitioners and, in lieu of public funding and significant philanthropy, couples like Bud and Cantoni are always nudging the numbers to keep their ship afloat. Thus, whilst developers eye off inner city sites for yet more apartment complexes and commercial rents track ever upward as available square metres are squeezed, even well-loved institutions like The Space are compelled to source additional revenues in order to remain competitive or, in point of fact, simply to stay open.

“We’ve never done this for the money, obviously,” says Bud. “Yeah, we have to make a living, but really we’ve just done this because we love dance and, you know, we’d really love to be able to keep doing this as long as possible.”

As Cantoni declares, “We’ve been around for 17 years now, and we feel that dance is such an important part of people’s lives, so we thought that we’d go to the crowdfunding model to see if some of our supporters can help us. Normally, when you donate to charity or something like this, you get that warm, fuzzy feeling, but with this you get that feeling plus you get dance classes.”

To contribute to the best sprung floor in Melbourne, and to keep one of the country’s best independent dance studios thriving, check out The Space’s campaign page at pozible.com/project/deck-out-the-skydeck.