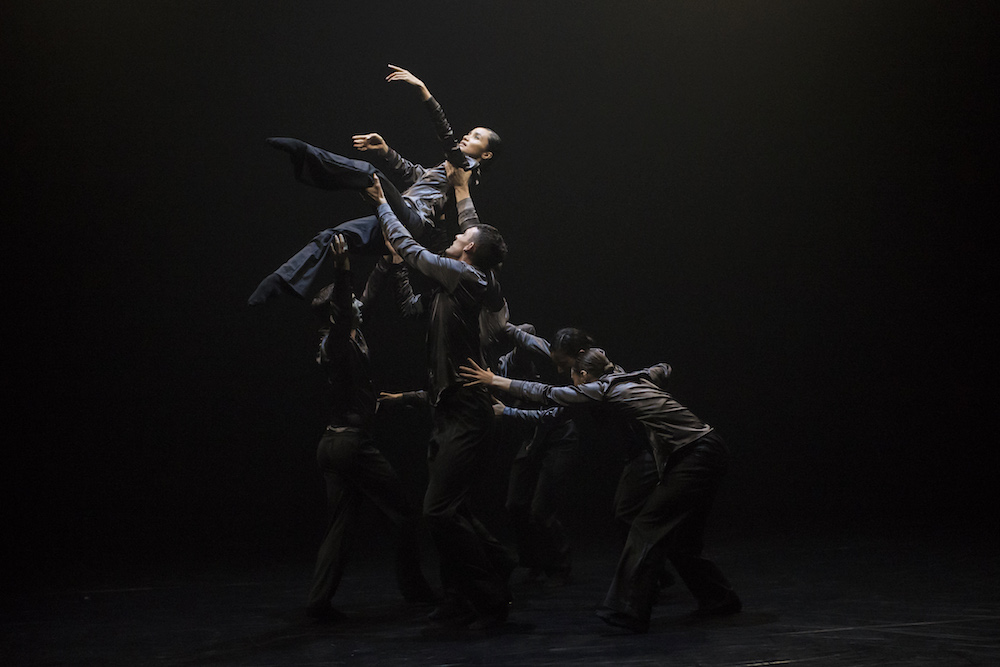 New Breed 2017 marks the fourth year of the Sydney Dance Company (SDC)/Carriageworks’ partnership to support and foster emerging choreographers. The budding choreographers are invited not only from the ranks of SDC dancers but also from amongst independent Australian dancers who demonstrate an aptitude to create and produce their own work. New Breed offers the rare opportunity to work with a full company of professional dancers, as well as offering the audience an opportunity to enjoy a diversity of performances.

This year’s four-part program provides a spectrum of moods and themes, from dark and murky battles in a bleak institution, to the overt humour of homo-erotic eco-sexuality.

The first of the New Breed are Cass Mortimer Eipper and Nelson Earl, performing their own collaborative work, Bell Jar, so named due to the affinity the choreographers found with a Sylvia Plath character who is trapped within her own musings.

“Dancing with our demons, we can’t help but remain caught between us and the outside world.”

The dim lighting and foggy effects within the historical Everleigh rail sheds created the desired dark mood; although, at times it was a struggle to see the actual movements, the dancing, through the smoke haze.

With a chaotic industrial score and plenty of room to move, the piece became a battle between two tormented souls seeking redemption or perhaps release. Danced well, with no surprises in terms of choreography, Mortimer Eipper acknowledges the impact of the music on the creation of Bell Jar, composed by Marco Cher-Gibard. “It is dark and intense. Cher-Gibard’s remarkable talent has enabled us to embrace a blend of thriller, horror and sci-fi.”

The Art of Letting Go by Petros Treklis with music from Rachmaninoff’s Sonata in G Minor is a welcome lyrical antidote to the intensity of Bell Jar. Using “seven dancers portraying one man and his mind”, this piece explores scenarios “which the mind may struggle to forget, move on from, or let go of.”

The choreography focusses on a fascinating connectedness – whether the dancers are scrolling and unscrolling, falling like heavy raindrops fluidly to the floor, or creating interesting sculptures when lifted high above. There appears to be no distinction between male and female in this piece; all bodies are asexually dressed in sombre dark shirts and pants.

Treklis’ work is memorable for his ability to “create” shapes and patterns, rather than simply incorporate the expected contemporary movements. It is here that he captures our attention and leaves us wanting more. This work is also memorable for the unexpected.

[Bio]Curious is a slightly confronting piece by Tyrone Earl Lraé Robinson with music by  L S D X O X O, which opens the second half of New Breed. As the audience return to their seats after intermission, we’re curious about the bath tub we walk past, complete with a female dancer bathing herself.

[Bio]Curious combines the strangeness of burlesque with homo-erotica and a highly aesthetic view of nature, as three dancers engage in a “ménage à trois”.

“As a form of conservation, sexuality and identity, eco-sexuality encourages people to connect with nature as they would a lover,” Lraé Robinson explains, adding that audiences can expect his work to be “oddly arousing”.

It is a very humorous piece and original in vision, with a setting of aroused plants and the main character prancing around in illuminated Y-fronts. What is lacking, however, is any build of tension, and, consequently, there is no climax.

The final work in the 2017 program is Melanie Lane’s WOOF, an exceptional and engaging work, “harnessing the fantasy of a post-human collective spirit.”

With the full company of dancers, this is an ambitious production, which flows seamlessly through the representation of various groups, from crowds to military précision. As Lane explains, “I’m imagining the work like a post-human army.”

With this vision of an automated future, the work includes a synchronised robotic sequence, performed effortlessly by the female dancers. We also see a broader vision in which we feel a distinct tension between the individual and the collective spirit.

As we reach the climax of WOOF, all dancers are on stage, moving as if in an urban space, alternating between spontaneous free-flow movements before returning to the “group think” style – walking on tippy toes, bent close-knit knees, upright, stable, an air of respectable conformity. WOOF provides a climatic finish to New Breed 2017, with the 17 dancers dispersing into a sunset-lit distance.

Throughout the program, the SDC dancers perform with absolute engagement and prowess, ensuring the best possible rendition of each choreographer’s vision.

New Breed is at Carriageworks until December 9.