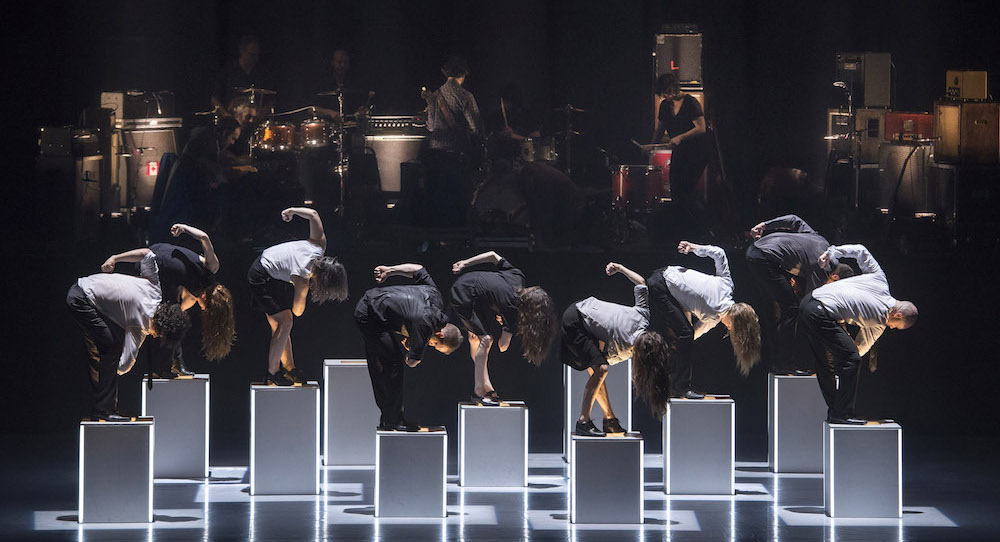 In Montreal, Dana Marie Gingras is getting ready to light a fire. Meanwhile, In Launceston, the ground is being prepared for the scorching intensity of Monumental.

It’s a chilly Thursday evening in Canada, but Gingras is briefly holding off on the fire to tell Dance Informa about her company’s upcoming jaunt to the southern summer for an Australian exclusive performance at Tasmania’s famous MONA FOMA (MOFO) event in January. As for the fire references, they make a lot more sense when you understand the incendiary nature of the work.

Monumental, which premiered back in 2005, has been revised and expanded since Gingras and her producer convinced fellow Quebecois experimentalists Godspeed You! Black Emperor to play their original score live. The result is a work of relentless intensity and pointed socio-cultural critique.

Initially inspired by a series of drawings and paintings from American artist Robert Longo, Monumental is a work about the speeding up and increasing atomisation of Western capitalist societies. As Gingras suggests, the work asks whether the mantra of more, more, more, faster, faster, faster is even vaguely sustainable. “It seems like the questions inherent in the work have become more pertinent than ever,” she says. “In the society we live in, everyone is now connected to their devices and everything is moving faster, everything is more fragmented, and so Monumental feels like it’s kind of come into its own time. It’s not good for us as the human race, but it’s good for the work.”

Shining a light into the darker corners of consumer fetish and digital (dis)connectivity is something that both the band (Godspeed) and the dance company (The Holy Body Tattoo) have in common. “We’ve always been interested in notions of progress. Like, where are we going?” Gingras asks. “We always feel a lack, like we’re missing out on something and we don’t have enough. So the current system is all kind of based on manipulating us into believing that we need more.”

Gingras is quick to insist, however, that Monumental doesn’t simply apportion blame or offer simplistic one-dimensional “solutions” to complex societal and environmental problems. Rather, it seeks to use an extreme form of dance, matched to Godspeed’s epic compositions, to illustrate the issues at stake for individuals and communities in a culture of constant acceleration.

Firstly, the company’s dancers are hoisted onto pedestals, and then they are driven to the brink of collapse. “It’s very risky for them to be moving as fast as they are, but the whole idea is to elevate them off the floor and put them into this element of risk to the point where eventually something has to come down,” Gingras explains.

The Holy Body Tattoo is known for extending the physical and psychological limitations of its dancers, and Artistic Director Gingras acknowledges the enormous challenge they face. “It’s a very difficult piece, and the dancers are completely my heroes. It’s not only challenging physically but mentally because the choreography is very dense, and it’s all set to really precise counts; but they’re also performing with the live element of the band.”

From a pure dance perspective, the matching of exact counts and the inevitable fluidity that comes with live music is one of the more intriguing elements of Monumental. “What I like is the effort it takes for the music and the dance to meet each other,” Gingras reveals. “The conversation that happens there, to me, is the magic of live performance.”

For MOFO audiences, the whole experience will be amplified by the sheer brutal magnificence of Godspeed You! Black Emperor. Also from Montreal, they are a collective known for very long, cinematic pieces that frequently rise to an overwhelming crescendo. Indeed, as Gingras says it, “In the arc of their music, there are such long builds of tension and release, and you really find yourself holding your breath in certain places. It’s a bit like a storm moving in, and sometimes it’s almost unbearable. So, it’s not easy for the audience.”

All of which fits not only into The Holy Body Tattoo’s brief of moving “beyond beauty and aesthetic and reflecting the world back to itself” but into the milieu of MOFO. Curated by Brian Ritchie from the Violent Femmes, it is ostensibly a contemporary music festival but one with a distinct edge. In this light, Monumental is a great match.

“I think the whole process of art-making is a slightly utopian thing,” Gingras says of the work and the festival. “You know, we’re doing big things with small resources, and people are really coming together and working with a great deal of discipline to make these things happen, so it’s like it’s this pocket of resistance to be an artist and to make work.”

But the Quebec/Tasmania link up doesn’t stop there, as Gingras will be working with Tasdance and MOFO both before and after the performance season to mentor local dancers and create ongoing connections. “It really came out of a conversation with Brian [Ritchie] specifically about trying to forge a relationship over a longer period of time,” she elaborates. “You know, getting involved with the community, potentially bringing other works across. It’s teaching, creating, performing, all of that stuff that comes from working together collectively, which is kind of what it’s all about for me.”