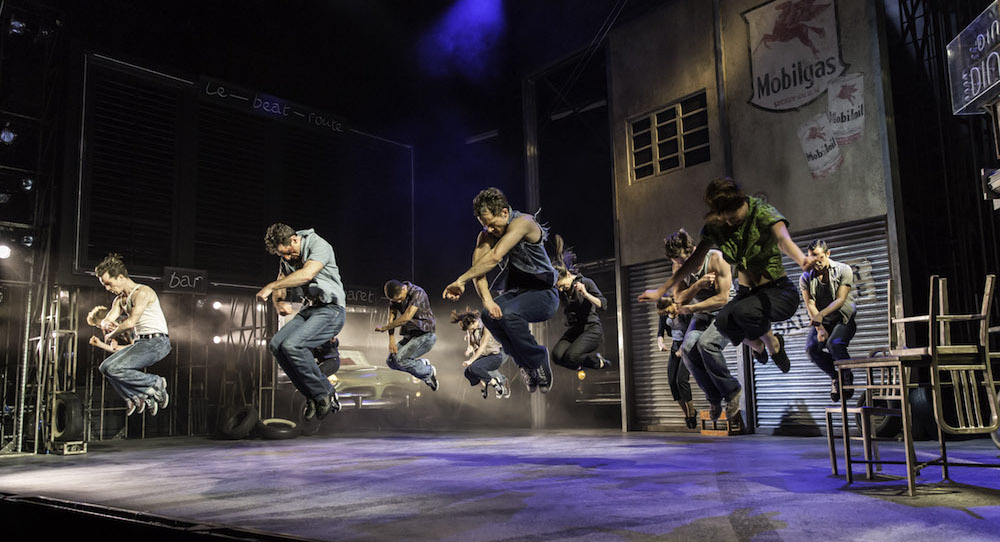 Welcome to the small town of Harmony…

Hot, slick, steamy and sexy, this second filming of the New Adventures’ The Car Man, as choreographed by Matthew Bourne, transfers very well from stage to screen. It was filmed in 2015 at Sadler’s Wells, and has just been released on DVD after selected screenings last year.

The commissioned music for the production is based on Russian composer Rodion Shchedrin’s Bolshoi Ballet version of Georges Bizet’s opera Carmen (1875), with additional music by composer Terry Davies, played with gusto by Brett Morris and the 14-piece orchestra. Carmen reworked and “dance noir” in style, the work is loosely based on James M. Cain’s novel The Postman Always Rings Twice (1934), and the 1946 and 1981 films with the same title. Chris Davey’s evocative lighting is superb in creating the hot and steamy atmosphere, or delineating the elegance of the club, or making us shiver with horror in the prison or in Luca’s nightmarish vision scene with Dino’s ghost.

Right from the start, The Car Man crackles with intense, sleazy energy. Harmony is a small, edgy and yet conservative Italian-American town in the 1950s, boiling in the summer sun and simmering with barely concealed lust. The mood is languorous and unsettled, the residents we meet mechanics — providing the title – and their women. Fighting is customary, as greasy guys drink until dawn and trouble their women.

Bourne’s choreographic style blends various elements of contemporary dance, ballet, Jerome Robbins-like/Broadway/jazz styles, Flamenco and even comedic mime, swiftly compelling the audience through varied emotions. Sometimes the choreography is sculptural, and there are incredible off-balance lifts. The marvellous ensemble performs with passion and finesse. If you know Bourne’s works, you can pick allusions to his Swan Lake, Nutcracker and Sleeping Beauty, for example. There is also plenty of comedy and wit, particularly the cheeky, hot and steamy shower scene in Act 1. The fight scenes are grimly realistic, and the Manon-like rape of Angelo in jail is horrifying.

The show begins when a mysterious stranger, Luca, arrives in town (Christopher Trentfield) who  distracts and grabs the attention of both the local garage owner’s Dino’s wife Lana (Zizi Strallen), who is trapped and suffering from ennui, and a sensitive, bullied, vulnerable young man Angelo (Dominic North).

As sultry, unwitting femme fatale Lana, Zizi Strallen is all crackling, saucy flirtation in Act I, and shows great depth with some wonderful sequences in Act II. She is all fluid, elegant motion. Angelo ends up in prison while Lana and Luca live a classy luxurious life in Le Beat Route café. But their relationship is now on the rocks, and in an impressive, fervent and passionate duet, we see Lana fall out of love with a drunken Luca and how this eventually leads to tragedy.

As Luca, Trentfield is charismatic and delivers a superb performance – to the well known Habanera, he has a hypnotic, slithery powerful solo.

The balletic pas de deux, between Rita, Lana’s younger sister (Kate Lyons) and the nerdish, sensitive Angelo (they are the sweet, rather innocent young lovers of the piece who appear chosen for happiness until he is wrongly imprisoned) is filled with delicately nervous yet blossoming tenderness and joy. Their last duet is an admirable example of Bourne’s narrative choreography, as lost innocence eventually leads to horror and despair, as Angelo, a gentle man, has become twisted and hardened by his suffering.

Dino the garage owner, portrayed by Alan Vincent (who created the title role back in 2000), is excellent as Lana’s rather appalling worn out slob of a husband. Lana is a bit afraid of him now and rather repulsed by him. Luca’s tango with Dino’s blood-soaked ghost is quite chilling.

The Car Man is a gripping, violently sexy story containing elements of homoeroticism which leads to murder, miscarriage of justice and ultimately shocked revenge.