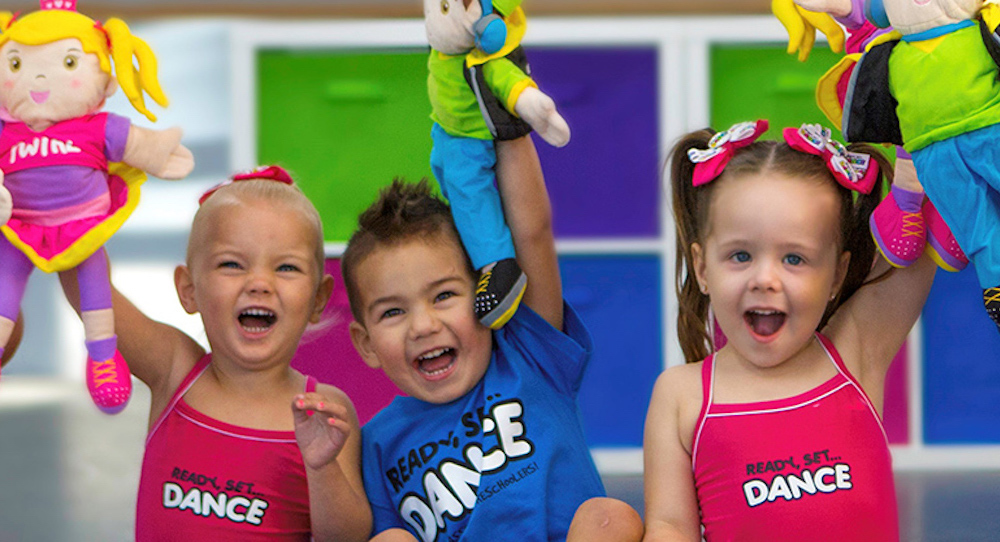 When five dance school directors from four of the largest schools in greater Sydney were brought together to collaborate on community dance projects, they had no idea where it would lead. In the space of the last two years they have banded together to create a preschool performing arts program that has not only reinvigorated the preschool programs in their own schools but has boosted, and in some cases saved the businesses, of a hundred dance schools across Australia and New Zealand.

This exceptional achievement led to nominations for the 2017 AusMumpreneur Awards in the categories of Business Excellence and Customer Service.

Dance Informa spoke with one of the Directors of Ready Set Dance, Natalie Ettingshausen, about their experience at the Awards and how the Ready Set Dance journey all began.

About five years ago, in response to a feeling of unrest and disharmony amongst the Sydney dance school community, Glenda Yee of Glenda Yee School of Dance invited directors from the biggest dance schools in and around Sydney to be a part of Project Dance.

Project Dance was a not for profit organisation formed to unite members of the dance community by creating small and large scale fundraising events.

The project was a huge success both on the fundraising front as well as bringing the community together.

It was during the meetings for planning the fundraisers that the Directors of Ready Set Dance started to talk to each other about their respective businesses.  Ettingshausen says ‘Out of Project Dance, we came together.  We united as schools to do non for profit charity fundraising and put community over competing and out of that we formed this group of five people, which is actually four dance schools, who have used the knowledge from running our schools and working in that other environment for the charity and collaborating, to create Ready Set Dance.’

‘As a result of getting together’ she goes on to say ‘we started discussing challenges in our own businesses and we discovered that there was a preschool market that wasn’t really being tapped into.’

The five women had noticed some programs popping up in local church halls that were very successful in generating students but had no follow on programs for the kids.  They also noticed that these programs tended to have a ballet focus and were not catering so much to boys.

They then realised that this kind of program was missing from their own schools and began to think about ways to devise and incorporate a unisex performing arts program of their own.

Ettingshausen, Barnes, Agostino, Severino and Yee are all extremely passionate about the performing arts and about providing an exceptional quality of instruction and education to both boys and girls. They all run incredibly successful dance schools that produce artists of a very high calibre who go on to dance professionally in the industry.

Ettingshausen says ‘When we were coming together for the other meetings we started to identify the strengths amongst us.  One school was really good at flexibility and technique and another school are producing a lot of kids that are coming out into the real world to be professional singers and work in musical theatre and they have singing in their preschool program.  My school, for example, we’ve got great tappers but we get them tapping from 3.’

They all discussed the fact that they were always receiving enquiries for Hip Hop classes for kids at a preschool age, something they weren’t offering at their schools.

So in the end they decided to combine their expertise and come up with a comprehensive, structured, skill-based, energetic and enjoyable performing arts program for 2-5 year olds.

They brought on board song writers from Australian kids television shows to help craft the music and lyrics to complement the specific styles of dance in the program.

‘We’ve got great songs’ says Ettingshausen ‘that we’ve written ourselves called Go Bananas and Hip Hop Italiano. We try to create lyrics that tell kids what to do, it’s instructional but it’s fun, it’s cool, it’s got a real fresh vibe and energy to the program but with a real focus on considering that it’s good for boys and girls.  There wasn’t anything around like that.’

The program was originally developed exclusively for use in their own dance schools.  As it evolved over time they decided to give it a name and eventually settled on Ready Set Dance.  Once it had a name, people in the community started asking ‘how can we get Ready Set Dance in our school?’ mentioned Ettingshausen.

As this was not something they had planned on, the five directors had to investigate an area of business that was completely new to them. They had to learn how to trademark and license and get their program out to other eager dance school owners.

Initially they started with 20 licenses and in the last year it has extended to 100 licenses throughout NSW, QLD, ACT, VIC, SA, WA and New Zealand.

Dance schools owners can apply for a Ready Set Dance license by going to the ReadySet.dance website and filling out an expression of interest form.  The program has a stringent vetting process to ensure quality of delivery.  One of the requirements being that Ready Set Dance must be incorporated into a school with follow on programs for the children.

‘That’s why the licence’ Ettingshausen explains, ‘to keep the quality and the energy in the program that we want.  We keep in touch with our licensees, we provide them with marketing materials and we do social media promotions.  We do mystery shoppers to protect the consistency and quality of the brand’ she goes on to say ‘and we’re learning that people expect the same experience wherever they go.’

Training for the program runs twice a year at the beginning and middle of each year as well as videos and DVD’s schools can use to refresh and relearn.  This year Ready Set Dance Central (headquarters) is hosting their first teachers’ conference as a gift to their licensees.  They are aiming to bring the community together so they can connect with one another, share stories and support each other.

Ettingshausen, Barnes, Agostino, Severino and Yee all love what they have created.  They really believe in the program and the difference it makes to lives of the children who participate, the parents who get to see their children blossom with confidence and strength of character and the licensees whose businesses have grown exponentially since incorporating Ready Set Dance into their schools.

‘We did not realise when we started what we were actually creating beyond a preschool solution. I think the exciting thing is seeing these principals saying that we’ve turned their whole school around’ says Ettingshausen.

All five directors are mothers themselves and drew inspiration from their own children to develop Ready Set Dance.  Ettingshausen admits that it can be a challenge to balance running her own performing arts school, Ready Set Dance and spending time with her family. However, the work is divided between the five directors, each having a specific role in the business, and they are streamlining and creating systems as they go along.

Ettingshausen has been especially touched by stories from parents regarding the impact the program has made on their children. Testimonials stating that the structure of the program has made a huge impact on the confidence of kids with social and physical challenges. As well as seeing major growth in the expressive abilities of their kids.

Another incredible benefit to sharing Ready Set Dance with others in the dance community Ettingshausens says is ‘We are seeing a difference in the way kids, parents and studio owners are interacting with each other (at dance competitions and events) in a way that didn’t happen in the past.’

On winning third place in the Business Excellence category at the 2017 AusMumpreneur Awards, Ettingshausens comments ‘I think what excites me about that, is the access that gives us to share the gift of dance, the idea of what it can do and the impact it can have on schools or parents and kids. It puts it out into a wider community so there’s more awareness.’

The AusMumpreneur Network is a community for Mumpreneurs, supporting and connecting Mum’s who are creating successful ideas and businesses whilst they balance a life with their family.  They have a website, an active Facebook page and the Awards that run annually.  Amongst the over 100 finalists for the awards this year, as well as the directors of Ready Set Dance, was also Kate Meade of the Victorian Dance Festival who was awarded first place in the Regional Business Award category.

Ready Set Dance has been a great success since its inception in 2015 and will continue to grow and build over time under the expert and genuine guidance of the outstanding women who have created it.  Ettingshausen admits there have been expressions of interest to bring the program overseas and although she says they are not ready to do that yet, it looks like the success of Ready Set Dance, and its wide ranging benefits to the performing arts community, has just touched the surface.