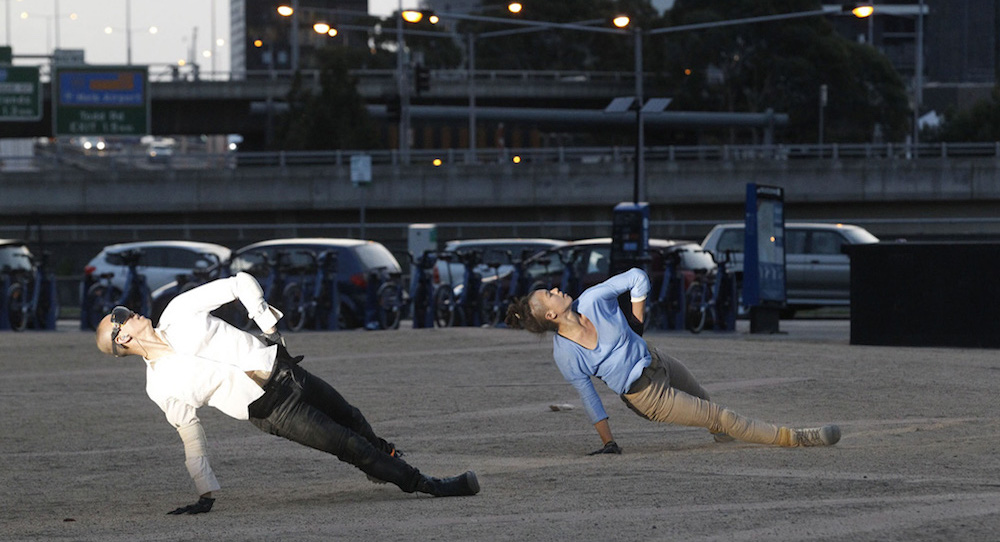 The location or space always partners a performance work. Whether it be a proscenium arch stage, a studio, a black box or a site-specific work, we receive the space as a part of the work. Chunky Move Artistic Director Anouk van Dijk’s Depth of Field invites audiences to pay attention to the site, and asks us to read the site as part of the work.

Depth of Field premiered in 2014 as part of Dance Massive in Melbourne, and now, Chunky Move has been invited to present Depth of Field this September in Aarhus, Denmark, as a part of European Capital of Culture Aarhus 2017. This will be the second season of Depth of Field, an idiosyncratic and hypnotizing beautiful response to the passing of time and reflection on the use of public space.  The first season was presented in the forecourt of the Australian Centre for Contemporary Art in Melbourne.

The phrase “depth of field” is from the photographic lexicon and refers to the nearest and farthest objects in a scene, or a photo, that appear acceptably sharp. In Depth of Field, van Dijk is exploring the fictions and actual conditions of a site. The site as a player in a work is something that van Dijk returns to often. Her very first work as artistic director of Chunky Move was presented in the Myer Music Bowl, an iconic site of Melbourne performance. In 2013, she initiated a trilogy of interventions between dancers, a movement score and a chosen site, beginning with Embodiment 1:1:1 at the Australian Centre for Contemporary Art, then Depth of Field and Rule of Thirds as the final work in the trilogy in 2015, which explored the theatre as a site.

“Originally, Depth of Field was created for a city view,” says van Dijk, “an open piece of land, a thoroughfare for people who live in the precinct, a quiet spot in the city, people who go for a run, get their groceries, walk their dogs. That’s what that space is used for. I juxtaposed the connection the dancers have between themselves with the chaos of the city. The Aarhus site is different; it is a quieter area in the city. We have two weeks in residence there.”

In the Melbourne iteration, Depth of Field made an ordinary site a spectacle. It makes a familiar place new for the eyes and the ears. The soundscore of Depth of Field is listened to by the audience through headphones.

“For the Melbourne season, I deliberately chose this orchestral epic material, to suit the dramatic landscape and the sunset,” van Dijk reveals. “[The forecourt in Melbourne] is very apocalyptic. The site in Aarhus is less apocalyptic. We are collaborating with a composer from Europe because Aarhus is the European Culture Capital for 2017. Hopefully, we are going to work with young musicians from the music school next door to the site. A choir is on my wish list, a string quartet, and that will inform how the music is composed.”

“First of all, I cast dancers with whom I am inspired by working,” van Dijk says. “The cast just happened to be a diverse cast. I saw they had an incredibly special connection, and they had a physicality that really aligned, and they could push each other to virtuosity and investigation. Popular media forms some kind of context around what Australia is. Aarhus will be very interesting; they will have an idea about what Australians will look like. They may be surprised. Hopefully it will create a contemplation for the audience about how diverse our society is.”

Depth of Field: Aarhus Variation will be presented on September 15 and 16, at Officierspladsen in Aarhus, Denmark.