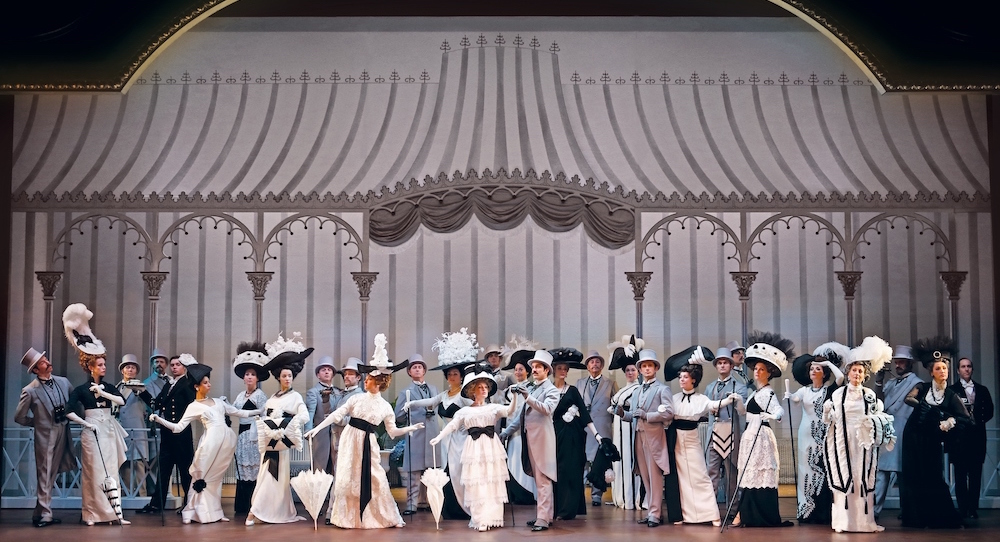 Celebrating its 60th Diamond Jubilee since first opening on Broadway, My Fair Lady received a standing ovation at Sydney’s Capitol Theatre, commencing an encore season after the success of a record breaking premiere at the Sydney Opera House in 2016.

Returning to where her success all began, beloved leading lady Dame Julie Andrews, who originated the role of Eliza Doolittle, has superbly directed this milestone production, produced by Opera Australia and John Frost.

The production is elaborate, lavish, heartfelt and sophisticated. It is wonderfully cast with well-seasoned performers, including Charles Edwards in the role of Professor Higgins, who is the perfect mix of intelligence and charm with a socially inept and petulant nature. Anna O’Byrne flawlessly undertakes a transformational journey from a low-class Cockney flower girl to a polished young lady who could be mistaken for a Duchess. She delivers an authentic and believable performance holding a Cockney accent, which slowly develops along with her manners as this love story unfolds. Reg Livermore as Eliza’s father, Alfred Doolittle, won over the audience providing just the right amount of cheeky humour; Tony Llewellyn-Jones brings a warm friendly disposition to Colonel Pickering; and a staple of Australian theatre, Robyn Nevin, eloquently portrayed Professor Higgins’ mother. The supporting cast are remarkable, together raising the bar of this production.

The level of creativity of the original production is not forgotten and has been meticulously reproduced for the next generation of theatregoers to appreciate. The magnificent costumes, including the black and white gowns, hats and head pieces worn to the Ascot races, are a visual feast, along with the dresses at the Embassy ball, showcasing the opulence and clear class distinction. The set design on two revolving platforms quickly switches from the streets of London to Professor Higgins’ house, to the Ascot races and Embassy ballroom. The detail in the furnishings and set design stay true to the original production. There was an audible gasp from the audience when the beautiful chandeliers descend into the ballroom, and when Colonel Pickering and Mrs Higgins were going to the Ascot races, there was a surprise inclusion of a motor car to take them there.

A highlight of the show are the well-known songs by Alan Jay Lerner and Frederick Loewe that are synonymous with this production and performed superbly by the cast, including “Wouldn’t It be Loverly”, “The Rain in Spain”, “With a Little Bit of Luck” and “I Could Have Danced All Night”. Equally as impressive is Christopher Gattelli’s choreography that included high-energy dances and fairy tale waltzes.

The success of this production is in the detail. Every part is of the highest standard, working together harmoniously to deliver a musical that pays the right amount of respect and homage to the past to deliver a wonderful audience experience.