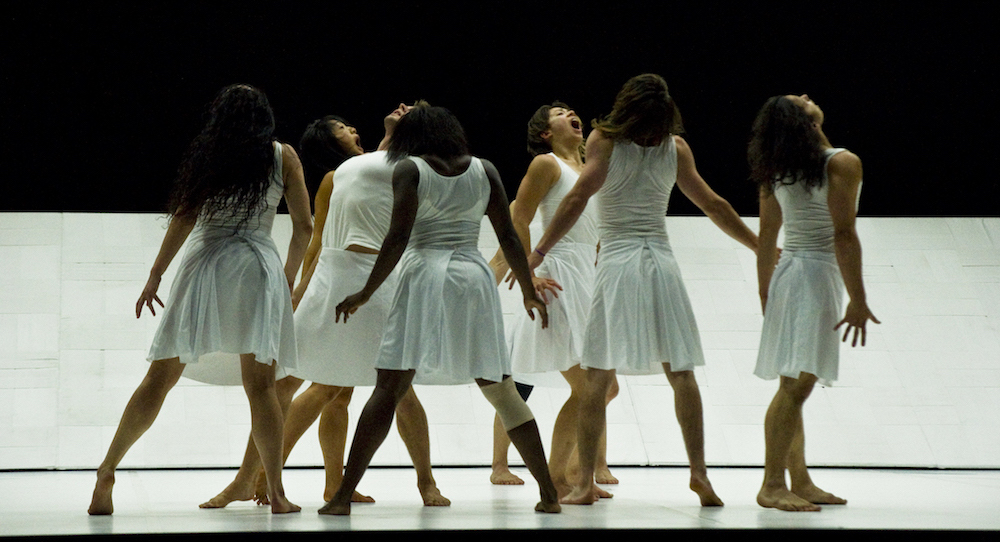 This was the one and only Sydney performance of Adelaide-based contemporary dance company Australian Dance Theatre’s Be Your Self Redux, one of its signature works. The company is currently in the middle of a national tour. In it, the company presents a scaled-down version of the original production choreographed by Artistic Director Garry Stewart with Assistant Choreographer Elizabeth Old, in a blistering fast-paced, high octane energy performance by the extraordinary cast of nine. The show is billed as being a Buddhist interpretation of the mind and body interaction of the concept of “self” and “I”, exploring what makes us each a unique individual, from a single cell for the first half hour of life to a grown human being capable of extraordinary things. It is explosive, coldly clinical, lyrical, poetic, dramatic and sometimes humorous, too. 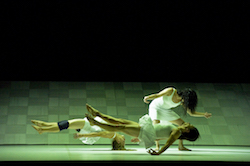 Presented on a bare stage – no real set as such, just a black and white “studio box” –  this is seemingly cold, clinical and futuristic but has a deep heart underneath. Movement, lighting and sound meld seamlessly. Damien Cooper’s lighting flickers atmospherically (some people might need to be warned that it is at times almost like strobe lighting), highlighting and accentuating the choreography. There is also the use of snappy blackouts, clean white light and washes of colour.

The minimalist white costumes hide gender yet also include an apron-like print of each dancer’s body in underpants and legs for clarity.

From the beginning, we are catapulted into the world of the piece, with several minutes of controlled, manipulated stillness as the narrator (Cathy Adamek) clinically describes how the mind and body work together to perform the simple task of flexing, then lifting a foot and leg, as demonstrated by dancer Kimball Wong. Scientific and medical terminology is used throughout in the various monologues to describe the various movements, which both educates and perhaps confuses the audience simultaneously, while also focusing our attention on the human form as exemplified by the body of the dancer. 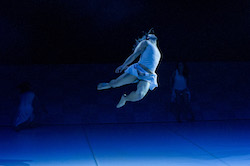 The fearless, seemingly inexhaustible, apparently boneless dancers are full of fluid, feral energy and give their all. Stewart and Old’s very demanding choreography is sometimes quite dangerous, requiring incredible control and precision, with death-defying leaps and jumps at times. There is a lot of ensemble work, sometimes rippling and sculptural, sometimes with arms like floating, undulating plants, others precise and robotic (are we meant to pick up on allusions to Nijinsky’s L’Apres -Midi D’un Faune?), interspersed with amazing fireworks of full pelt solos and some intricate, difficult lifts and partnering, animal-like moves and moonwalking. There is also strong, powerful floorwork and some simulated sex scenes. At times, the dancers sculpturally shift positions, somewhat like a section of a Muybridge​ film. We also get the sense, as also mentioned in Adamek’s narration, that time is inexorably passing – lifetimes worth of cellular regeneration, circulation and sex. Toward the end, when the work becomes progressively abstract, the dancers become representations of assorted body parts, aligned in challenging ways. So we see the evolution of human beings on stage: from tiny cells and blood underneath the surface to the experience of emotions and movement. 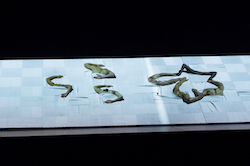 Having clinically analysed the human body and its functions, Be Your Self decides that our existence is entirely dependent on our memories and our interaction with others in the world. As Adamek summarised toward the end, “We are all alone in the world; yet we are connected to all of it.” The work raises thought-provoking questions about how we function, both invisibly inside and our outside mask, who we are, and what those things mean, leaving us questioning the underpinnings of who we are while searching to understand our somatic, emotional, physical and systematic selves.