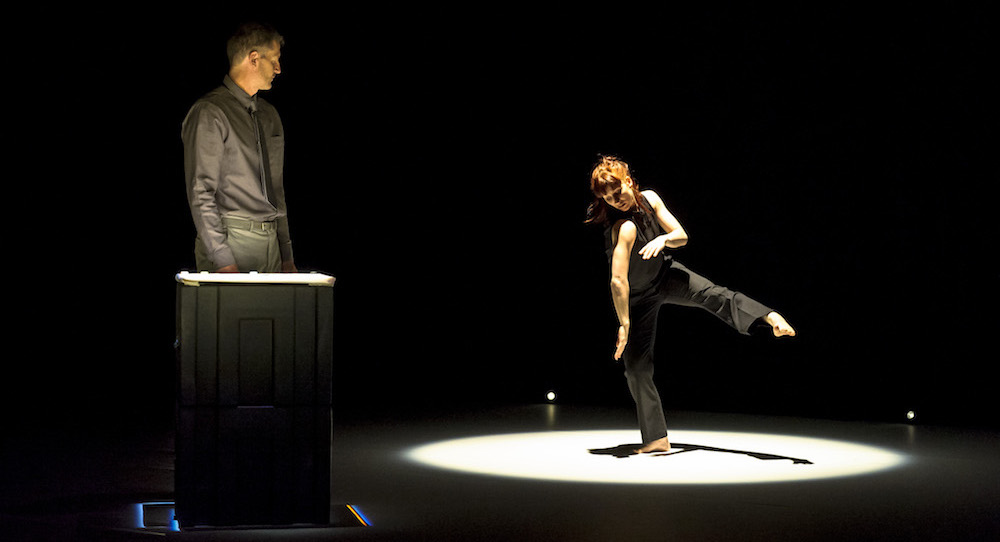 Split Second Heroes is the culmination of over three years of development by Gabrielle Nankivell and her collaborators Vincent Crawley, Luke Smiles, Will O’Mahony and Benjamin Cisterne.

This work, which is extremely dense with ideas, many layered over each other, takes the audience on a journey through the stories of Black (performed by Nankivell), White (performed by Smiles) and Grey (performed by Crawley). This epic journey is accompanied by a wonderfully authentic and nostalgic ’80s sound score with vivid colourful lighting that is controlled by the performers. 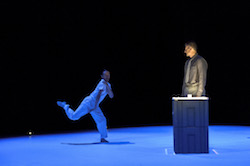 Grey (Crawley) is the storyteller. He stands in the centre of the stage behind two stacked grey cubes, which act as the control centre for the lighting and starts by explaining to the audience what light is, how it works and how we perceive it. Crawley’s performance is measured, elegant and articulate.

Throughout the narration, Grey pulls out various stylised props, such as a miniature rocket ship made of Lego and a Japanese paw-waving cat (Maneki-neko), that symbolize aspects of the White (Smiles) and Black (Nankivell) personalities and help support the stories being told with clear visual representation. Grey also places four small mobile switches on top of the control centre from which he directs the lighting as well as sensors he rolls over the top of the cubes that allows spotlights to follow the dancers around the stage.

The live element of the lights reacting to the movement and the mood on stage makes it feel as if there is a fourth performer. At times, a much smaller coloured cube is placed on top of the control centre, and as the cube is turned, the light changes in accordance to the colour facing up. The stage is then flooded with the rich hues of either red, blue or green.

The dancers enter onto a stage that is surrounded by a circle of small floor lights with Grey at the helm of the control centre. Black and White begin by travelling around inside the circle of lights before Grey shifts into the telling of the individuals’ stories.

White is introduced as a conservative, intellectual nerd. He is an Astronautical Engineer who possesses all the qualities of a quintessential geek with a love of Japanese anime and Lego. Smiles’ movement is extremely fluid and precise, perfectly matching the role he is playing. 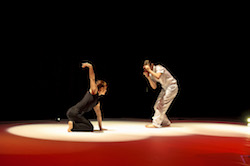 Black is then introduced as a strong, angry individual who is struggling through life, ready to fight at any moment. Nankivell’s performance is powerful, athletic and unwavering as she weaves her way around the stage.

As the story continues, we are witnesses to a boy-meets-girl scenario in which White falls for the rebellious and reckless Lucy (Black).

The work then moves on deeper into the story of White and Black falling in love, making their way through a romantic montage of movement with the music lightening the mood. The dancers take snapshots using a handheld polaroid camera capturing the lovers in their ever so poignant, love-at-first-sight moments.

There is a shift as the music gains tempo and the dancers move more frantically around the stage. They are stopped suddenly by the deliberate sound of a technological malfunction, which Grey then tries to resolve by miming his way through imaginary doors and corridors until finally disconnecting the source of the noise, much to the great relief of everyone.

The audience continues to be taken on a journey as the work moves on through the ups and downs of the characters, gaining more insights into their lives. Black begins a frenzy of movement that builds until she collapses. Grey comes over to support her as she lays down; then, the three performers start to move together, intricately weaving around and in between each other, always connected.

Out of this entanglement and struggle, the performers emerge into a car ride on the way to an important presentation. On the way, they play a game of “Eye Spy”, and the pace becomes more and more frantic as they hurry to get to where they have to be. This results in a car accident, and everything quietens and darkens as we see Black on the ground as the unfortunate victim. 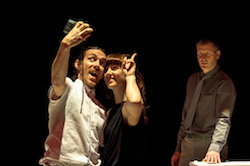 The work then circles back to the beginning with the simple circular circumference of lights surrounding the stage. The three performers merge as one as they dance around the circle together again. There is a countdown to the end, and all the props, including the polaroid camera and photos, are laid out around the stage.

Grey, now left on his own, pays a tribute to Black and White by reminiscing and telling the story of how they jettisoned off to live on a space station and how much he misses them. He picks up one of the polaroid photos and places it, as a final gesture of reverence, on top of the control centre in front of the miniature rocket ship. As the lights go down, the rocket ship lights up like a tiny Christmas tree and Grey exists the stage.

Spilt Second Heroes thoroughly explores the stereotypes of gender and aspects of the human psyche. It encompasses the timeless themes of love and loss, expectations and disappointment, of fantasy and reality. Together with the intuitive and colourful design of the lighting and the stellar ’80s style sound, this work gives the audience much pause for thought and conversation.