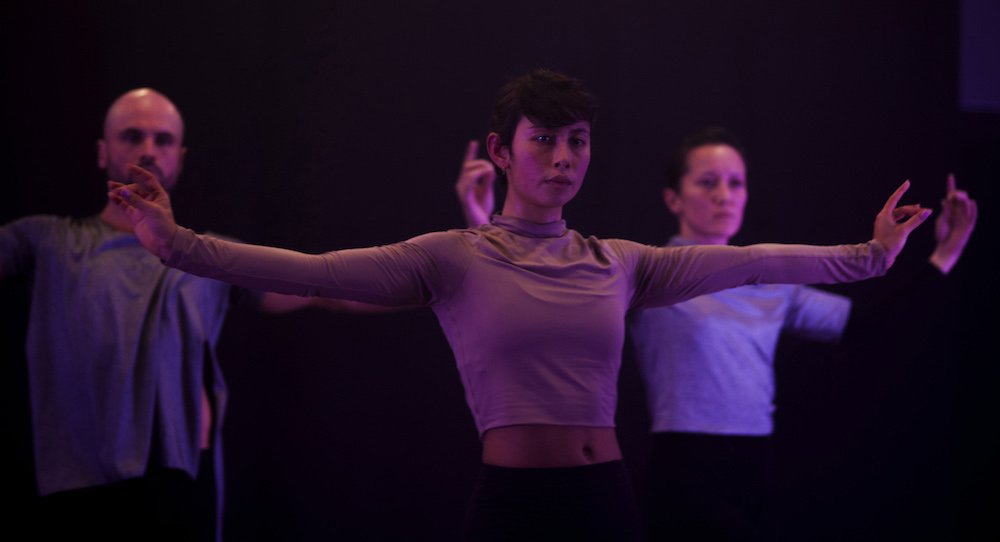 In what amounts to a “mini festival” of two, Arts House in North Melbourne will play host to world premieres from two of Australia’s most intriguing female choreographers in consecutive weeks in August.

Stephanie Lake’s Pile Of Bones will be followed a few days later by Melanie Lane’s Nightdance, a conjunction that will bring together a bunch of the country best’s contemporary talent, including Lilian Steiner, Jack Ziesing and renowned photographer/dancer Gregory Lorenzutti. Of course, other than being programmed under the same roof in the same month, there is no obvious connection between the two works. However, the juxtaposition is, in itself, revealing of something deep in the veins of dance creation.

‘Pile of Bones’ by Stephanie Lake. Photo by Jeff Busby.

As Lake says of her work, “There’s something for me in there also about the bare essence of the human experience. What’s our most essential physicality as moving, breathing beings?”

The desire to investigate the primal and universal also informs Lane’s Nightdance. “All communities across the world have that night entertainment environment, and everyone has some kind of experience with that. You know, and it involves some kind of shift, something very visceral.”

Indeed, as many have observed, as an artform (let alone as something we all do), dance is brilliantly able to examine the things that lurk beneath the veneers of language and culture. As the famed Chinese choreographer Tao Ye likes to say, “We all have a body.” Thus, when considering two otherwise unrelated works, we can detect forms that puncture the often divisive and reductionist surfaces of aesthetic and narrative.

Of Nightdance, which explores the dances and rituals that happen in clubs, cabaret venues and sleaze bars, and then tries to translate that into the box of theatre, Lane says, “I see it as creating a third space. We can’t really encapsulate that night dance thing in a theatre, but we can learn the tools and use them as a kind of new language.”

Meanwhile, Pile Of Bones is tapping into a different kind of language; namely, the private chatter that fills our heads. Although the title of work was inspired by Lake’s Canadian family origins (Pile Of Bones was the former name of the capital city of Saskatchewan), the terrain it address is that of inner demons and angels. “That constant chatter and how, as you grow older, that noise gets a little bit louder because you’ve got all these layers,” she explains. “You know, how do you choose what to turn up and what to turn down?”

Bringing that babble out of the headspace and onto the stage is Lake’s challenge. How to use the body to express such conflict? “I’m always interested in oppositional forces,” she declares. “That’s such a great place to start from in choreography. All that tension, that push and pull. So yeah, we explore this idea of things sitting on their shoulders and having some kind of exterior influence over their actions and whether that’s voluntary or involuntary and what the implications are of that.”

Similarly, Lane is working with deep seams, except that in her work the river is also external. Social, sexual, even spiritual. In the world of the night, the dance is anything but pristine, as she and her dancers (Steiner and Lorenzutti) witnessed on their research forays into Melbourne’s nightlife. “One of the things we observed in all the different places we went was this kind of hunting,” she recalls. “It was a very primitive, human thing. People were either on the hunt for something sexual or something euphoric or ecstatic.”

This, in turn, unearthed a key performative issue. “One of the things that was really clear from the excursions we made was that the ‘gaze’ was a really strong element of performance but also of communication between people,” Lane adds. “It’s really different from what we usually get in a contemporary dance performance. It’s a very direct contact with the eyes.”

Here again, we find ourselves in territory that shatters the neat lines of cultural compromise. Of the frequently disturbing power of eye contact, especially within the world of dance performance, Lane observes, “I guess it’s kind of a seduction, but at the same time there’s a barrier of safety. You know, there’s this kind of duality of seduction and safe distance. But that’s the thing about the night; there’s always this element of danger or the unknown in the air.”

If dance offers us the possibility of breaching the buffer zones we keep wedged between us, Lake underscores the idea by pointing at the very practise of dance-making, suggesting that in its very construction, the artform dissolves distance, and this in spite of its often abstract outcomes. “It’s the best and the worst thing about working in dance because it is so intimate,” she illustrates. “You literally work close to people, especially as dancers. I mean, you’re covered in each other’s sweat.”

Although, as a dance audience, we are unlikely to be directly perspired on, if we allow it we can find ourselves in the presence of raw, evolutionary essentials. Of social simian ceremony. Of blood and bones, sinews and skin, and what that ultimately says about us. This, if anything, is what may draw these two new works together. (Oh, and the surname similarity thing, of course.)