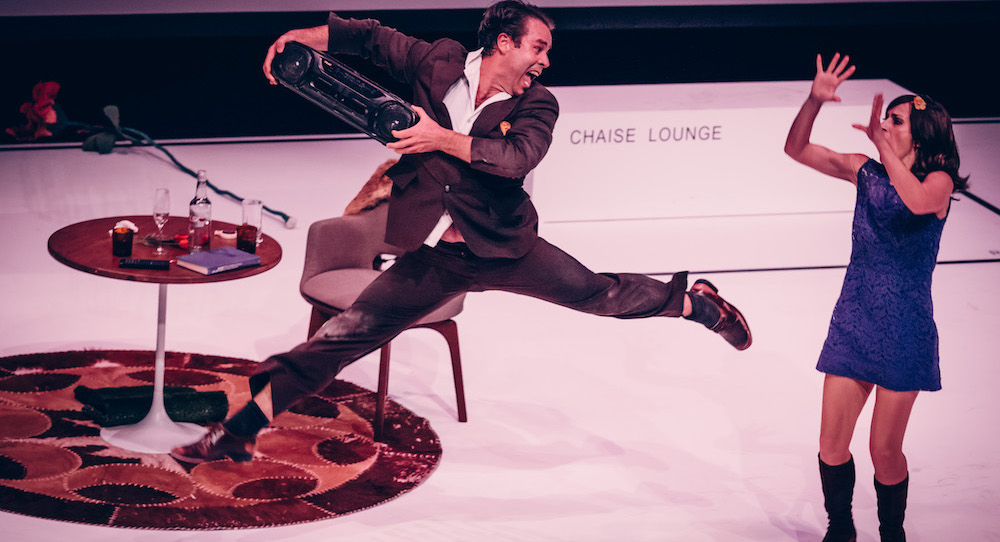 Romantic love. It lifts us up, tears us down and drives us mad. It inspires us in all kinds of ways and is responsible for any number of tacky, sentimental clichés (kind of like the previous sentence). No wonder artists have been obsessed with it. Such fertile terrain. Sooo universal.

For Australian dancemaker Shaun Parker, who relishes the tackling of big themes in his work, the representation of love and coupledom in the context of a consumer culture sits at the heart of one his company’s most cherished works, the satirical Blue Love. Having been a critic favourite and successfully toured, it is now set to be revived for a special, one-off performance in Sydney this August as part of the company’s fundraising effort.

Of all Shaun Parker & Company’s back catalogue, Blue Love is the ideal candidate for a fundraiser, if only because its themes, characters and narrative are so recognisable. Using film, physical theatre and popular love songs, it tells the story of a middle-aged couple reflecting on the life of their relationship.

Recalling the germ of the idea, Parker reveals, “I was with the original co-director, Jo Stone, in Vienna, and we found a karaoke bar and we sang all these love songs; and we were really drawn to all the daggy, romantic stuff. It wasn’t just the beer goggles; it was like, ‘Oh my god, these songs are so true.’ You know, it’s like these days pop songs are almost the most poetic things, and so, right away, came this idea for an epic piece based entirely on one-liners from pop songs.”

That was in 1999, and, upon returning to Sydney to take part in the shooting of Moulin Rouge, Parker teamed up with Stone to create a short film inspired by their Viennese experience. Eventually, the idea developed into a theatre piece with the film at its core.

After its successful run, however, Blue Love was “put to bed, so to speak.” Now, 18 years later, the original film has inspired a new take on the work. Teaming up once again with Stone (on screen) and Adelaide-based performer Lucia Mastrantone (on stage), Parker has used the years to good effect. “I’m 47 now, and in fact we’re all in our 40s,” he admits, “but the film was made almost 20 years ago, so when we show the home movies in the play, it’s like this older couple looking back on the younger versions of themselves. So, it’s taken on a whole new meaning where a married couple looks back on the golden years of their romance.”

Although there is something undeniably corny about this set-up, that’s part of what Parker is playing with. Indeed, romantic love is renowned for crossing the high art/low art line. Of Blue Love, Parker says, “It could sort of be described as a live soap opera; you know, with the studio audience and all that but taking place in an art gallery.”

Despite all the romance, though, there will be a harder, real world edge to proceedings when Shaun Parker & Company takes to the stage at the Seymour Centre on August 23. “Part of it is a fundraiser for our 2018 programme of activities, especially the stuff we do in schools, where we really try to make it not just to the well-off schools but to the lower socio-economic areas, too.”

Throughout his career, Parker has always sought to engage with ideas and audiences in a way that speaks tangibly to people’s contemporary experience. As the head of a not-for-profit organisation, he remains passionate about the role that dance and art more broadly can play as an agent of awareness and change.

As an example, he aims to restage his much loved anti-bullying work, The Yard, next year, with the intention of touring it to schools and speaking directly to the adolescent cohort featured in the piece. “There are some schools out there that just don’t have the funds to pay the full ticket price to bring The Yard to their kids,” he explains, “so the fundraiser helps to subsidise the tickets, so those kids don’t miss out.”

Given that the company’s social outreach is so much a part of who Parker is as a man, it seems pertinent to wonder if indeed the characters and situations of Blue Love are similarly drawn from personal experience. Chuckling, he replies, “I’d say there are definitely elements of self in there, but also observation of my parents and other couples. But yeah, there’d be some of my own ‘love antics’ in there, too. It’s hard to avoid. It sort of creeps in without you realising.”

Having won two Australian Dance Awards, a Green Room Award and even a “Bearer of Hope” Award in Germany, Parker is still prepared to put himself and the company on the line to make work and make it viable to keep doing so. “Well, one must suffer for one’s art,” he jokes, although you suspect that beneath the levity is a serious point.