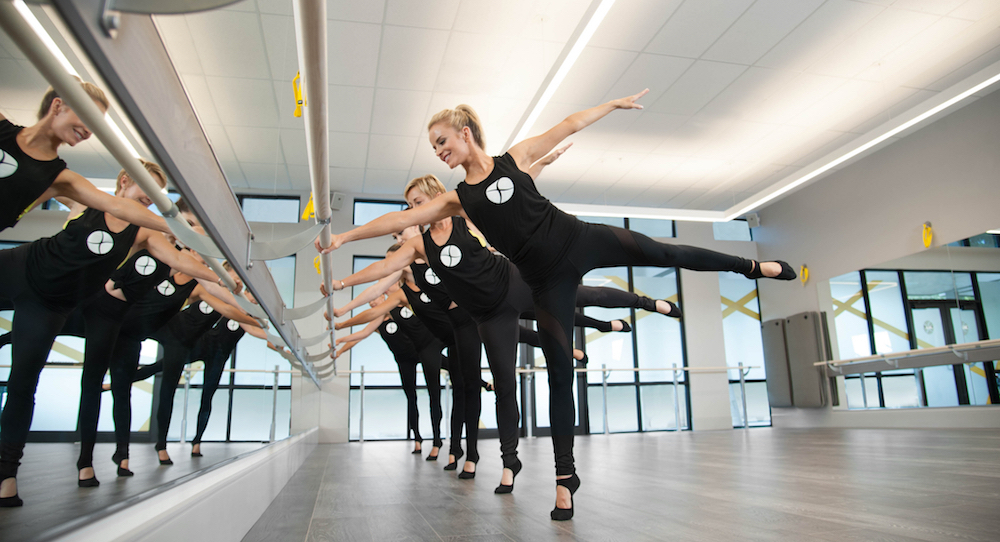 One of the good things about globalisation is the speed at which trends move around the world – from the return of the hipster and old-style barber-shops, to the availability of Xtend Barre on almost every continent.

Xtend Barre was developed and launched in the USA by Andrea Rogers in 2007. After an extensive career as a professional dancer and choreographer, she became a certified Pilates trainer but realised she missed the music and movement of dance. She started to incorporate some simple ballet moves, including cardio work, into her Pilates classes and, unexpectedly, her clients were not only enjoying the format changes but also noticing beneficial changes in their own bodies.

In 2010, Australian-born Rockell Williamson-Rudder, an ex-Moulin Rouge dancer, brought Xtend Barre to Australia and grew the brand to over 60 international locations.

A 55-minute complete body workout incorporating classical ballet, Pilates and cardio, an Xtend Barre class is done to backing music; the movements called by a qualified instructor. This is a non-stop workout, incorporating a warm-up, hand weights and mat work before challenging the lower body and core at the barre. The results can create a longer, “chiselled” body, with improved fitness levels. And there’s no complicated choreography!

I asked Williamson-Rudder whether there was a typical profile of her Xtend Barre clients in Sydney.

“It’s so diverse and really depends on the suburb,” she explains. “For example, the studio at Drummoyne is mainly ‘Yummy Mummies’ and students working out during the day, followed by an older clientele of working or retired ladies who come to the evening classes. The Sydney city studio includes both city working girls as well as more mature clients who also like the exercise format and the friendly environment.”

When asked what advice she would give to a first time ‘Xtender’, Williamson-Rudder says, “Have fun! You are not meant to look like a member of the Aussie Ballet Company. It’s about moving your body to feel like a dancer, and that may take five or six classes, but that’s okay.”

The inner city Emergy Pilates studio at Potts Point is owned and managed by Helen Tardent, a classical ballet dancer. It’s here that you’ll find a number of working professional dancers (perhaps performing on nightly cabaret boats or on the stage), actresses and singers, as well as your Mr and Ms Average. Yes, there are male clients and male instructors!

Do you remember pliés (bending your knees) and relevés (heel raises) from your ballet school days? It feels kind of cool being at the barre doing a dancer’s workout, and there’s always plenty of energy and motivation in the room…as well as sweat! Which brings us to some global comparisons.

On a recent trip to France, I decided to compare an Xtend Barre class in Paris to the classes I do in a mix of Sydney studios.

I discovered that there are only two Xtend Barre studios in Paris, compared to nine in Sydney. I chose My Studio, where I did the class but also took photos and interviewed the owner, Brenda Nohan, an American now living in Paris. A certified Pilates instructor, Nohan opened her studio, aptly named “My Studio” in the 16th arrondissement in Paris. This is a very elegant “French” space in a rather classy suburb, which also meant getting into the studio was a bit of an adventure for the uninitiated.

I asked if Xtend Barre was increasing in popularity in Paris, and the answer was interesting and not unexpected, but certainly highlighted the difference between Parisiens and fitness-motivated Australians.

Nohan explains that growing Xtend Barre as an exercise option in Paris is difficult. “Parisien women prefer to do ‘Mat Barre’ because they don’t like to sweat and mess up their hair and makeup,” she says. “But Mat Barre doesn’t provide a complete body workout, and it certainly lacks the benefits of cardio.”

The class with Nohan is great, and I feel right at home as we go through the same components found in the majority of registered Xtend Barre studios, and I’m very happy to sweat!

One difference I do notice is that Nohan does the whole class at full throttle, whereas in the various studios where I’ve “Xtended”, the instructor always demonstrates the moves but will usually also move around the class to correct individual form and maybe explain technique. After the class, Nohan explains, “I really have to push the Xtend Barre clients. They’re not used to pushing themselves, so I need to put in 150 percent so they don’t slacken off!”

Xtend Barre may be popular among ex- and current dancers/performers, but it still remains accessible to both beginners and those “of a certain age” thanks to modification options offered by the instructors.

How many of us have had dreams of becoming a dancer or performer but never quite made the grade? I know that’s why I love my Xtend Barre; it not only keeps me fit but also keeps me in touch with the dancer inside.

I hope to meet you at the barre one day!

For more information on Xtend Barre or to find a studio near you, visit www.xtendbarre.com.au.